After posting their best one-day performances in more than a year yesterday, it's no surprise that stocks are taking a breather this morning. The Dow Jones Industrial Average (DJINDICES:^DJI) and the broader S&P 500 (SNPINDEX:^GSPC) are down 0.2% and 0.1%, respectively, as of 10:15 a.m. EST.

Auto sales motor ahead
Auto manufacturers will release December and full-year sales figures today, with new-vehicle sales set to reach 14.4 million units in 2012. Auto sector research firm R.L. Polk is forecasting this year's sales could reach 15.3 million for economy-thumping 7% year-on-year growth. That would put the sector on track to achieve sales of 16 million units the following year, which would be the first time it hit that milestone since 2007 (see the graph below; the shaded gray area represents the Great Recession of 2008 and 2009). 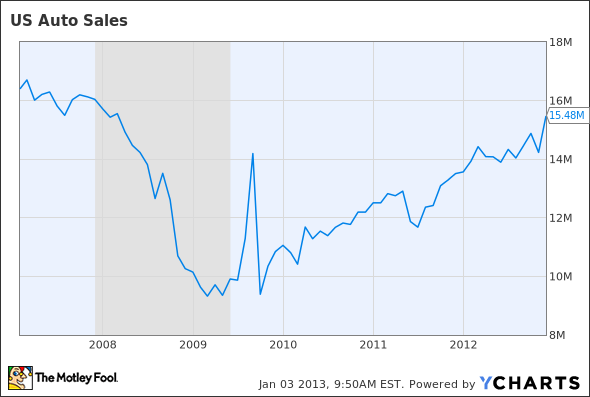 US Auto Sales data by YCharts.

Autos have long been a bit of a conundrum for value investors. On the one hand, the industry is an oligopoly, with the "Big Three" of Chrysler, Ford (NYSE:F) and General Motors (NYSE:GM) representing more than two-fifths of the U.S. market in the 11 months to November 2012. Brand management is an important part of the business and is a source of value. Less attractive is the recurring need for substantial capital expenditures to remain competitive. All told, U.S. automakers have struggled mightily to earn their cost of capital on a consistent basis for the past several decades. When auto sales collapsed in 2008 as a result of the credit crisis, only Ford was strong enough to avoid a bankruptcy filing.

Still, there is a bond market adage that says there are no bad bonds -- only bad prices. Similarly, even the shares of cyclical or low-quality businesses are attractive at the right valuation. With Ford and GM trading at 9.1 and 8.5 times earnings-per-share estimates for the next 12 months, their valuations won't prevent the stocks from outperforming the S&P 500 this year (as they did in 2012). As demand continues to build momentum, barring a major economic slowdown, the shares could take off in 2013.