Advanced Micro Devices (NASDAQ:AMD) has been running without a permanent CFO for a while. Former financial chief (and ex-CEO, to boot) Thomas Seifert resigned abruptly in September. That wasn't an upward jump but a lateral move at best -- Seifert ended up in the CFO position of privately held wireless device distributor Brightstar.

Nearly four months later, AMD has chosen Seifert's successor. It's no outside superstar or acknowledged turnaround specialist, which is exactly what the company needs right now. Instead, AMD has cemented interim CFO and longtime corporate controller, Devinder Kumar.

This is not an upgrade. AMD may have pursued some big names, but we'll never hear about that because none of them signed up. And I can't blame the CFO free agents out there for turning down AMD's advances.

The company is running an increasingly distant second to sector titan Intel (NASDAQ:INTC) and doesn't pose a serious mobile threat to the army of ARM Holdings (NASDAQ:ARMH) licensees. The company is up to its eyeballs in debt and burned $160 million of free cash last quarter.

Short on opportunity and long on fiscal pressure, even the best and brightest would have a hard time setting AMD's crumbling balance sheet straight. 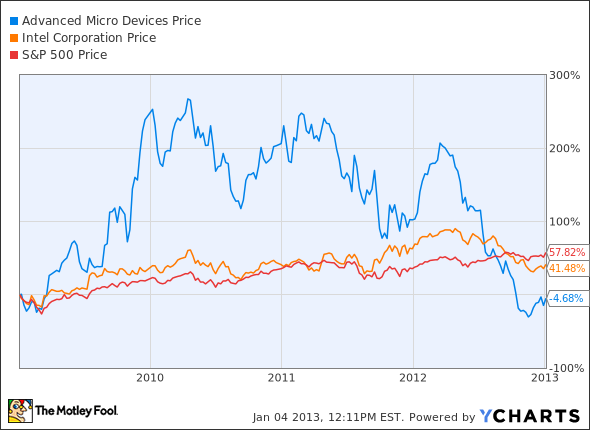 The stock trades just pennies away from four-year lows set in November. Shareholders have lost a hair-raising 69% from 52-week highs. Some might call this a buying opportunity. Don't believe it. For the reasons listed above, it's a dangerous value trap. No disrespect to Mr. Kumar, but his permanent promotion is just another sign that the company will keep rolling down the same disastrous road.