Which company is the best big biotech for 2013? Several of the major players recently presented at the 31st annual JPMorgan Healthcare Conference.  Sifting through the information that the companies shared helps us to determine who takes the prize. Here are highlights for the top four contenders.

Amgen (NASDAQ:AMGN)
Amgen CEO Bob Bradway noted that 2013 will be the last year that the company splits profits on Enbrel with Pfizer (NYSE:PFE). Beginning next year, the agreement switches to a royalty model, which means Amgen will make more from sales of the drug. On the negative side, Bradway acknowledged that "there will be new competition in the anti-inflammation space."

Several other Amgen products are coming on strong. Prolia/XGEVA are on track to top $1 billion in sales for 2012. Bradway also referenced solid growth for new products in the company's lineup: Sensipar, Nplate and Vectibix. The recent fiscal cliff deal helped prospects for Sensipar by keeping the drug out of end-stage renal disease bundles through 2016.

Regarding Amgen's pipeline, Bradway highlighted several phase 3 cancer drugs. Initial results from phase 3 studies for AMG386 in the treatment of ovarian cancer and T-VEC, which targets malignant melanoma, are expected in 2013. Another promising oncology drug, AMG102, has a phase 3 trial under way for the treatment of gastric cancer. Bradway also expressed great expectations for AMG145, a cholesterol drug advancing to phase 3.

The potential exists for Tysabri, Biogen's second-biggest drug, to become an even larger revenue source. A phase 3 study is under way for use of Tysabri in treating secondary progressive multiple sclerosis, which impacts around 35% of multiple sclerosis patients and has no approved drug treatment. Results from the trial are expected in 2015.

The FDA makes its decision on another multiple sclerosis drug, BG12, in less than three months. The company is ready for a commercial launch in the second quarter of 2013 pending approval.

Other drugs in the pipeline include two hemophilia compounds: recombinant Factor VIII, for which regulatory approval should be filed in the first half of 2013, and recombinant Factor IX, for which a Biologic License Application was submitted in  late 2012. The company also anticipates phase 3 results for PEG Interferon Beta-1A in the first half of this year. Results from a phase 3 study of daclizumab HYP, another multiple sclerosis drug developed in partnership with AbbVie (NYSE:ABBV), are expected in 2014.

Celgene (NASDAQ:CELG)
Celgene provided upbeat product and financial updates. CEO Bob Hugin announced 2012 earnings should come in at the high end of previous guidance. He also projected sales growth over the next five years at a 19% compounded annual growth rate.

The company's leading product, Revlimid, continues to do well. Celgene expects approval in China for Revlimid in the near term and is working on approval for myelodisplatic syndromes in Europe.

However, Celgene's new products excited Hugin the most. The FDA makes its approval decision for Pomalyst in treating relapsed refractory myeloma on Feb. 10. The company hopes for European approval by end of 2013.

Hugin spoke about several recent pipeline success stories. Positive results were found for Abraxane in treating melanoma and, even more importantly, pancreatic cancer. Possibly even bigger news came from apremilast, for which Celgene will submit for regulatory approval after strong phase 3 results in multiple studies.

Gilead Sciences (NASDAQ:GILD)
Gilead's CEO John Martin emphasized the launches of two HIV products in 2012: Complera, which launched in developed markets, and Stribild, which launched in the U.S. in August. Martin noted that Complera's launch was impressive, but prescriptions for Stribild are 70% higher than Complera during the same time period. Gilead expects European approval for Stribild this quarter.

A promising drug in the company's HIV pipeline is its nucleotide reverse transcriptase inhibitor TAF. The drug advances to a phase 3 study this year. Martin heaped praise on sofosbuvir, a hepatitis C drug for which phase 3 studies are under way. Gilead intends to submit a New Drug Application in the second quarter.

Martin also discussed Gilead's oncology program. Of particular note was idelalisib, which is in a phase 3 study for treating chronic lymphocytic leukemia and a phase 2 study targeting indolent non-Hodgkin's lymphoma.

And the winner is...
Gilead was the biggest winner for investors in 2012, with shares surging 75%. Celgene came in last position among our top four. 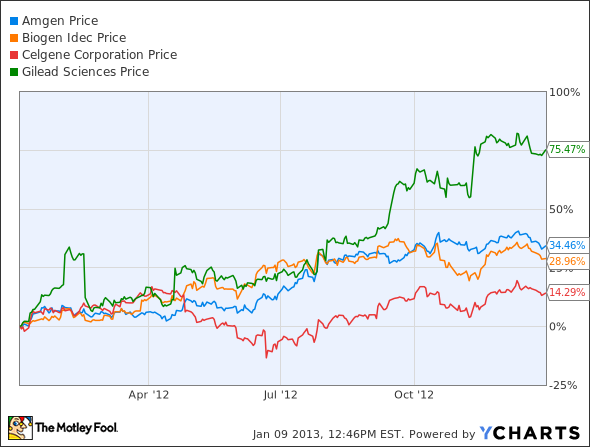 My view is that investors really can't go wrong with any of these stocks. However, I like Celgene the most because of the strength of its new products. The company's presentation this week spurred a 12% rally that I suspect will continue. With solid potential for more drug approvals in the near future, Celgene looks to be the best big biotech for 2013.