Shares of First American Financial (NYSE:FAF) reached a 52-week high on Monday. Let's take a look at how it got here to find out if the storied company with the eagle logo can fly any higher.

How it got here
First American Financial is one of those stocks operating in an unexciting niche but producing exciting returns. Founded in the late 19th century, its core business is title insurance, a form of guarantee usually attached to mortgages protecting the home buyer against risks (property liens, lawsuits, etc.) incurred previous to their ownership. That's not very dynamic or sexy, is it?

The company's investors might beg to differ. The stock has more or less steadily advanced over the last year, to the point where it's nearly doubled from where it was in January of 2012.

Like the firm's business model, the reasons why are rather straightforward. With the American housing market finally crawling out of its post-crisis hole and producing good returns,investors are busy grabbing a piece of the recovery, to the benefit of associated niche providers like First American Financial.

Safe as houses?
Traditional ways to play the housing upswing are by putting money in a big-time mortgage slinger like Wells Fargo (NYSE:WFC), a busy home builder like PulteGroup (NYSE:PHM), or mixing things up a bit through investment in a REIT such as Annaly Capital Management (NYSE:NLY).

Construction is thriving, but banks and REITs have had their difficulties in spite of that success. Like most big American lenders, Wells Fargo and its ilk have been hit by a raft of penalties related mostly to questionable financial crisis-era activities. The performance and potential of sprawling financials are also sometimes hard to digest, given the sheer amount and variety of their assets... not to mention the cloudy, black-box nature of some of their business units.

Many REITs, meanwhile, are going through a squeeze "thanks" to the Fed's latest round of quantitative easing. This has made the government a big buyer of mortgage-backed securities, driving down yields of such instruments. And, consequently, tightening interest margins for the REITs that invest heavily in them.

So the appeal is obvious for more straightforward businesses like the guys physically building the housing stock or the firms guarding against nasty mortgage surprises. Comparing the one-year stock performance of the three asset classes -- REITs, title insurance providers, and builders -- reveals stark differences in share price performance: 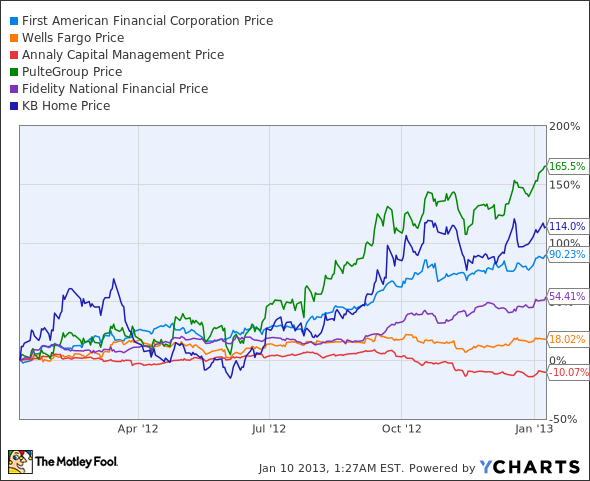 The money guys -- Wells Fargo and Annaly -- are at the bottom, while First American Financial and its main rival Fidelity National Financial are next and much further up the ladder, delivering one-year returns of 54% and 90%, respectively. They haven't blasted as far ahead as PulteGroup or KB Home (NYSE:KBH), though, perhaps because they're not the people nailing in the drywall and pouring the concrete.

But that's likely a reason First American Financial's stock has advanced as much as it has. The main product the company builds is insurance agreements, meaning it doesn't have to spend millions, if not billions, to produce its revenue. It's a business that can produce good results without heavy costs. So it doesn't have the sprawl and opacity of the mortgage giants, while it avoids the cost burdens of the construction firms and developers.

What also helps greatly is the title insurer's recent fundamentals. The three reported quarters of 2012 demonstrated a steady and certain improvement, with the top line advancing from the $969 million of 1Q to the $1.1 and $1.2 billion, respectively, of the following quarters. Net profit growth was even better: $31 million in 1Q, which doubled and then some to $73 million the following quarter, and expanded further by almost 50% to $103 million in 3Q.

Profit jumps like that often make companies generous, and First American Financial is sharing the wealth. Matching its recent profit jump, the company hiked its dividend payout by 50% this past October, disbursing $0.12 per share.And if anything will get a stock noticed and crank up its appeal, it's a 50% dividend boost.

What's next
The rally in First American Financial looks sustainable. The general outlook for housing is good, with many economists and market observers opining that home buying and building will continue to advance. Americans are more financially secure, while developers have better access to funding for their projects, two key factors driving the sector.

First American Financial by default is benefiting from this -- naturally, when more mortgages are originated or refinanced, the demand for title insurance grows. The opposite side of that coin, at the risk of stating the obvious, is a decline on the back of a housing slowdown.

So ultimately, an investor's view from the eagle depends on how they feel about housing. If they have a contrarian opinion, it's best not to take flight with the big bird. If they're bullish, however, that ride could be a sweet and profitable one.