Yesterday's session saw shares of Cirrus Logic (NASDAQ:CRUS) decline by 9.37% on heavy volume while shares of Apple (NASDAQ:AAPL), its biggest customer, fell by 3.57%. The drop was largely attributed to a Wall Street Journal story that reported Apple had cut its orders to several component makers based on weak iPhone 5 demand. Other Apple suppliers were hurt by the news as well, but Cirrus relies on Apple for 62% of its revenue as of 2012; and as much as 79% in the last quarter. With Apple facing serious questions about the growth prospects of the iPhone, some have begun to wonder if Cirrus can maintain its extended growth trajectory. Ultimately, the Apple news and the Cirrus sell-off are overdone, making them both buying opportunities.

The sell-off
The news that sparked the recent decline in Apple shares can barely be considered news. In response to the initial report, Bloomberg not only pointed out the amorphous nature of supply chain math, but reminded us that this news was in the hands of analysts nearly a month ago. For that matter, a month ago, I wrote about the order cuts contained in a Jefferies report by Peter Misek. In addition, senior Fool tech analyst Eric Bleeker offers an equally reasonable explanation for the reduced orders: Apple, which has had issues with display yields in the past, may have had greater success in the current iteration, thus reducing its order.

Furthermore, fellow Fool Evan Niu points out that the three Apple display makers were "reportedly set to build 65 million iPhone displays for the current quarter." After 45 million to 50 million shipped in the quarter in which the iPhone 5 was released, that size increase is, to quote Evan, "absurd." The real takeaway is that without placing the story in context, it is practically meaningless. The fact that The Wall Street Journal carried the story this time does not make it new, just more widely circulated.

How is Cirrus positioned?
There is no doubting that the fates of these two companies are inexorably tied together for the foreseeable future. Based primarily on the company's relationship with Apple, Cirrus turned in significant earnings results on Oct. 31. The stock declined 16% the next day, however, based on a lower revenue forecast in its March quarter. In the quarter, revenue jumped by more than 90% on a year-over-year basis to $193.8 million; earnings posted a record quarter and a year-over-year increase of 154.2%. Both numbers were considerably above analysts' expectations. The bulk of the growth came from the company's Audio Product division.

Since Apple hit its record high above $700 in September, the stock has plunged by about 30%. Cirrus has turned in similar performance, down over 30%, which makes sense considering the increased volatility displayed by Cirrus relative to Apple. Looking at the last five years (see chart), both stocks have been in solid and extended positive trends. While the recent sell-off in each stock is clearly a correction, unless either name continues lower, the price action should not be considered a reversal. 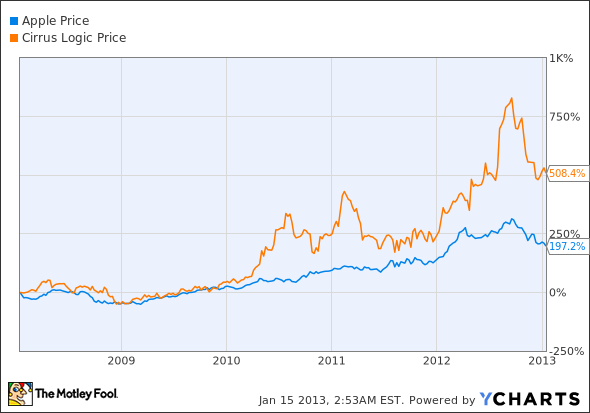 While the report of lower component orders was enough to drives shares of both Apple and Cirrus lower, keeping these figures in perspective is important. If there was an even a near-correlation between a 50% reduction in orders for parts and a 50% reduction in iPhone sales, Apple shares would have collapsed, not dipped lower. The numbers behind the story are either wrong, or, more likely, they are simply misleading. A big reduction in these orders is likely business as usual, meaning that the dip is an opportunity, not a cause for concern.

Where do we go from here?
So, can Cirrus survive without Apple? It's not likely that it will be necessary to find out. While Apple has certainly stumbled of late, the company remains one of the strongest players in consumer electronics and the company's fundamentals are among the strongest in the industry. Apple is currently trading at a P/E of less than 12, has an operating margin of 35%, and continues to experience significant quarterly revenue growth.

Perhaps of greater importance is the fact that with the explosion on the global smartphone market, there is more than enough room for Apple to face significant competitive forces and still put up huge numbers. As long as that is the case, Cirrus is in good shape. Today's price action might be a good opportunity for the company to look at other Apple suppliers and consider boosting diversification among its customers, but for the immediate term, Cirrus is safe. In fact, with shares down as much as they are, both Cirrus and Apple should be considered buys.