Intel's (NASDAQ:INTC) been under a lot of fire lately for its reliance on the dying PC industry. Today's earnings do little to comfort skittish investors, as the stock has fallen over 5% after-hours, after a confusing jump in the final minutes of the trading day. What's behind this yo-yo performance, and what does it mean for Intel going forward? Let's take a closer look.

What the numbers tell you
Intel's fourth quarter very nearly replicates its third quarter disappointment. That quarter, analysts were cautiously expecting $0.49 in earnings per share, and were blown away by a beat to the tune of $0.60 per share. This quarter, a $0.48 EPS result was a narrower beat of the $0.45 per share that analysts were expecting; but a beat is a beat, right?

The problem today, as it was last October, is that Intel's guidance wasn't good enough for the Street. Last October, Intel's fourth-quarter forecast of $13.6 billion in revenue, and an implied (by my fellow Fool Anders Bylund) bottom line estimate of $2.5 billion, didn't impress analysts who were expecting better numbers. This perception of weakness contributed to a month-long slide  that slashed 10% off Intel's value, before a year-end rally brought it back to even. Intel missed that $13.6 billion revenue forecast this quarter by about $100 million; but, as with October's report, today's after-hours slide can be blamed solely on another weak guidance estimate -- 2013's first quarter revenue estimate of $12.7 billion (at the midpoint) comes in $200 million below the Street's consensus.

What might be more concerning is that this is just another quarter of sequential declines for Intel, which has been gradually losing steam. Both revenue and net income peaked at the tail end of 2011, and the company has enjoyed nothing close to a holiday sales bump this year: 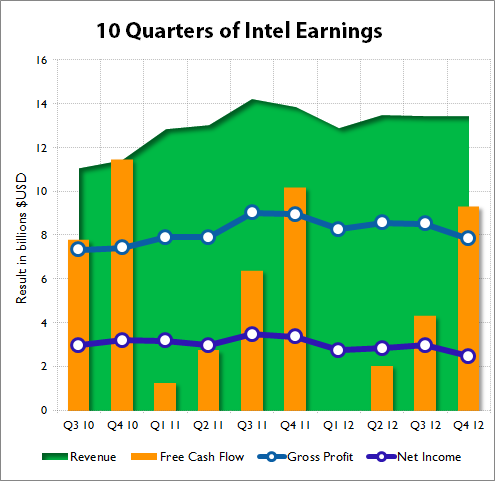 What does it mean for the future?
The only bright spot in Intel's report was growth in its Data Center Group , which has been no doubt buoyed by demand for cloud computing. That segment is up 6% in 2012, to $10.7 billion in revenue. The PC segment was down 3% for the year, and Intel's smallest segment, the "Other Architecture" group, is down 13% from 2011.

In 2013, Intel envisions low single-digit growth in revenue, which would put the company at about $55.5 billion for the full year, if we assume 4% growth from 2012's total revenue of $53.3 billion. Given Intel's other tidbits of information -- gross margin of 60%, operating expenses of $18.9 billion, and a 25% tax rate -- Intel's implied full-year earnings are in the range of $10.8 billion, about $200 million lower than 2012's final result. Capital expenditures of about $13 billion are likely to contribute to further free cash flow declines from what we've already seen since the end of 2010, as that will represent an 18% increase in capex from 2012.

Intel's conference call promoted the upcoming release of its Bay Trail tablet chip for both Windows and Android, the imminent production of 14-nanometer chips (the rest of the industry is currently working on 22-nanometer chips ), a plan to integrate Wi-Fi into mobile chips early in 2014, and an eventual transition to 10-nanometer chips. CEO Paul Otellini blamed the drop in PC revenue on inventory drain throughout the industry, but it's still going to be important for Intel to transition more aggressively into tablets in order to regain any form of positive momentum.

This wasn't a great earnings report by any measure, but the company remains both very inexpensive and very solid on a dividend basis. Investors may be in for another yo-yo month like the one that followed Intel's last report, but a more important concern is whether the company can really drive growth in new areas with enough speed and strength to offset the slow deterioration of its most important segment. Intel isn't going anywhere. But is that really enough?

Can Intel Survive the Slow Death of the PC? @themotleyfool #stocks $INTC Next Article
Current