The process of fracking– in its latest iteration – is a game-changer.

Those in favor of the controversial method of extracting oil and natural gas point to its potential to lower energy costs and allow the United States to soon be energy independent. Those opposed point toward a litany of examples of environmental degradation.

In the middle of all of this sits Heckmann (NYSE:NESC), a company that specializes in supplying and treating the water used in fracking. Below, I'll give a quick explanation for how all of the controversy surrounding fracking could affect Heckmann.

The process of fracking isn't too complicated. Companies drill deep holes – presumably under the water table we draw from for our everyday use; then they inject a solution into the crevasses of the rock to release either oil or natural gas, and they capture that energy for later use.

Heckmann comes into play dealing with the solution that is injected into the ground. Though it doesn't insert some of the unknown and controversial elements into the solution, it aims to provide most of the water for companies to make such solutions.

Then, to close the loop on its business model, Heckmann takes the solution that's already been used and disposes of it – by injecting it into specific underground wells, or by treating it.

Though the reality of the situation will probably play out somewhere in between, Heckmann could benefit in various ways from the fracking process.

If companies like Exxon, and others with skin in the game, are able to put their considerable financial resources behind proving that fracking is safe, it could be a huge boon for Heckmann, as its list of potential customers could swell in the coming years.

The company has already built out miles of pipeline in several areas to meet the demands of natural gas drillers in some of the biggest shale plays in the United States.

If environmentalists have their way...
But for Heckmann investors, all is not necessarily lost if the proper authorities deem fracking to be hazardous to our collective health. If the demand for alternative energy remains strong, and proper safety procedures are put in place, Heckmann could still be sitting in the sweet spot of the industry.

Though it already had a presence in the water treatment business, the company's purchase of Power Fuels – a water treatment company with heavy exposure to the booming Bakken Shale in North Dakota – puts it in the driver's seat for the niche industry. Though there are bigger water treatment companies out there, like Veolia (OTC:VEOEY), they are for more focused on other areas.

With performance to back it up
One of the most confounding aspects of Heckmann is the wide variation the company has when it comes to performance. Having only been publicly traded since late 2007 – and only recently having made its primary focus meeting the water needs of the energy industry – revenue numbers can vary wildly. On top of that, in an effort to stay on top of its niche, the company is spending more money than it is bringing in right now, leading to several quarters of unprofitability.

One look at the growth in revenue, however, shows that Heckmann could be on to something. 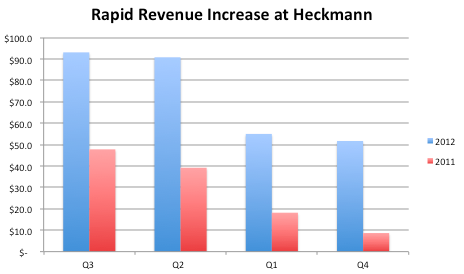 Taken together, the company has increased revenue from about $114 million one year ago, to $291 million over the past 12 months – an increase of 155%!

But that's not all the story
In the end, though, there are some scenarios where Heckmann investors could come out with egg their faces. If fracking is thrown out the window entirely, if there simply isn't enough demand for gas companies to invest in safe fracking techniques, or if competition is able to come in and steal market share away, then Heckmann's supposed sweet spot could be wasted.

I personally believe enough in the potential here to put my money behind it. But realizing the potential risks, Heckmann only accounts for about 1% of my overall holdings.