Increased production, improved efficiency, and alternative energy could free the U.S. of foreign oil in a decade.

A decade ago, if you told someone that energy independence would be conceivable by 2020 they would have said you are crazy. Consumption was growing, production was shrinking, and there was no end in sight to oil imports.

Fast-forward to today and the Energy Information Administration is predicting that we'll be energy independent by 2030 and at the very least we should be the largest oil producer in the world by 2020.

Where we've been
Since the industrial revolution the consumption of oil has been rising at a seemingly non-stop rate for decades. Until the 1970s this wasn't a big problem because oil could be found easily in Texas, Oklahoma, and elsewhere around the country, so production grew with demand. In 1973, we imported just 34.8% of the 17.3 million barrels of oil supplied to the country each day.

By 2005, all of the easy oil was found in the Middle East, our oil production was declining, and consumption showed no signs of slowing. The country consumed 20.8 million barrels of oil every day and 60.3% of it came from overseas.

But that's when a few unforeseen events turned the U.S. from a hopeless consumer to a huge producer of oil and a leaner user at the same time. The price of oil skyrocketed to $140 per barrel, leaving consumers little choice but to abandon gas-guzzling SUVs for smaller or more fuel efficient options. The high price also made ultra-deepwater offshore drilling in the Gulf of Mexico economical and gave a newly refined technology called shale drilling a breath of life.

Since 2005, consumption in the U.S. has dropped 10.6% to 18.6 million barrels per day and because of increased production we now import only 41.7% of the oil we use. And there are three things that will help these trends accelerate.

Increase production
The factor that gets the most attention by the media is increased production, and rightfully so. Increased oil production creates jobs in the U.S., reduces our reliance on foreign oil, and keeps money flowing through the U.S. economy. Over the past few years the U.S. has done a surprisingly good job increasing production; this will be key going forward. 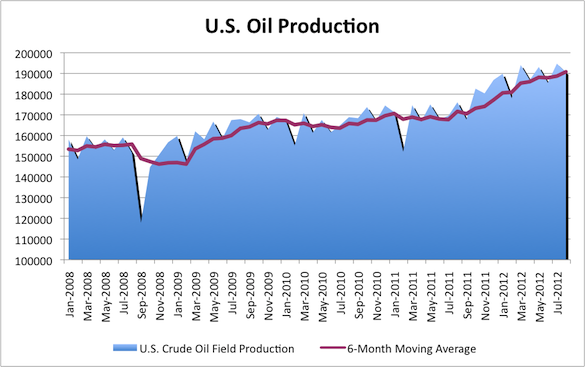 To keep production rising we actually need to see the price of oil remain fairly high. Shale drilling is still more expensive than conventional drilling because it's more complicated and therefore it demands a higher price. Costs are falling, but as we saw with natural gas this year, the price of the commodity being produced can only fall so far before drilling will stop.

With companies of every size from ExxonMobil (XOM 0.79%) to Chesapeake Energy (CHKA.Q) to Quicksilver Resources (NYSE: KWK) transitioning as much capacity as possible from natural gas to oil production there's no reason the trend won't continue.

Increase efficiency
The discussion about fuel efficiency is often overlooked in the discussion of oil independence but it is just as important as supply. After all, if demand didn't exceed supply currently we wouldn't have this problem.

The good news is that our oil consumption has declined pretty dramatically since peaking in 2005, and we should see even more of a decline in the future. 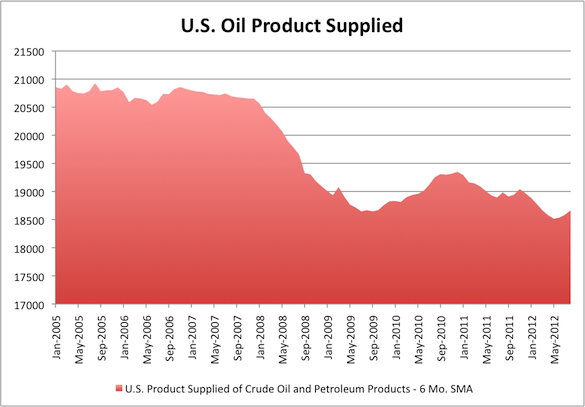 The drop in demand in 2008 and 2009 can be directly attributed to the recession, not a great driver of decreased demand, but the drop over the past year can be tied to increasingly efficient vehicles. SUV sales dropped when the recession hit and manufacturers Ford (F -2.72%), General Motors (GM -1.99%), Honda (HMC 0.04%), and Toyota (TM 1.78%) are all focusing on efficiency. This is partly driven by consumer demand for more efficient vehicles, but the government is also pushing them in that direction.

The Obama administration recently finalized new fuel efficiency standards that will raise fleet efficiency to 54.5 miles per gallon by 2025. Momentum on the demand side will continue to drive lower oil usage in the future.

Alternatives will play a big role
They only play a bit role in our current transportation picture, where most oil is burned, but alternative fuels will begin playing a much larger role over the next few years. Clean Energy Fuels (CLNE -1.80%), General Electric (GE -0.65%), Chesapeake Energy (CHKA.Q), and others are playing a role in building an infrastructure of fueling stations for trucking fleets around the country. When Westport Innovations (WPRT -4.80%) begins rolling out a heavy duty engine next year this could take another bite out of demand.

Another alternative that will have an impact, albeit smaller, is the electric vehicle. EVs certainly haven't lived up to the lofty expectations of some, but as the range of these vehicles improves they will become a viable alternative.

The end of oil imports on the horizon
The three factors highlighted above will continue to drive the U.S. toward oil independence. We've already reduced the net import of foreign oil by 38% from 2005, which is an incredibly rapid rate for an economy as big as the U.S. The chart below should continue to see a downward trend well into the future. 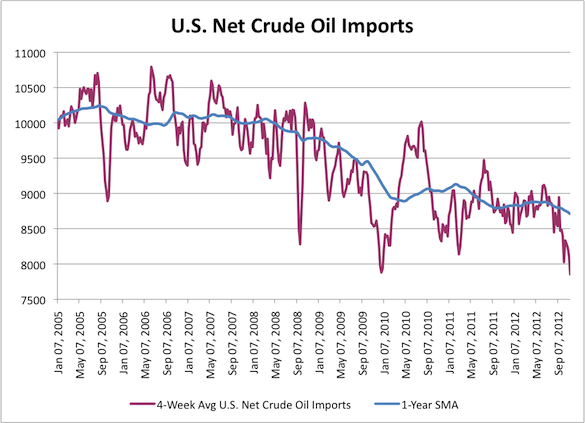 The winners
When looking for winners in the energy independent future I like to focus on plays that aren't tied directly to the cost of oil, but instead benefit from increased production. Seadrill (SDRL) and Transocean (RIG -2.26%) own drilling rigs that drill for oil offshore. With ultra-deepwater finds in the Gulf of Mexico and other locations around the world, these companies will continue to see high dayrates for rigs.

Onshore, I like companies moving oil from drilling locations to refineries and finally to customers. Enbridge (ENB 0.23%) and Kinder Morgan (KMI 0.05%) would be two solid plays here.