Last week, energy independence was put on the table by the Romney campaign, something the U.S. hasn't talked seriously about in decades. What Romney wants is North America (not just the U.S., an important distinction) to be energy independent by 2020. That sounds like an audacious goal on the surface, but it may be closer than you think.

Below I'll cover where we stand and where we're headed when it comes to our three largest sources of energy: coal, natural gas, and oil.

We are not only a net exporter; exports have been trending higher since 2006. It's pretty clear that coal won't be an issue in the goal to become energy independent.

Natural gas
You might be surprised to find out that the U.S. is actually a net importer of natural gas, despite the boom in production in recent years. We imported 657 billion cubic feet in the first five months of 2012, according to the EIA, about 5.9% of consumption.

Like coal, the trends are also moving toward natural gas independence. In the first five months of 2012, net imports were down 44% from the same time frame in 2010, and the chart below shows just how rapidly our net imports are declining. 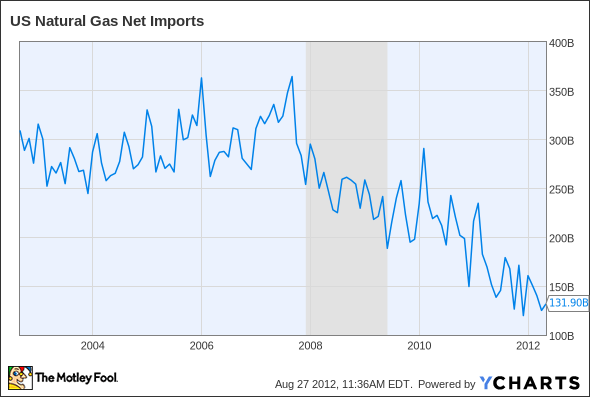 When talking about North American independence, natural gas almost becomes a moot point. Ninety-four percent of imports come from Canada, and the majority of the remainder is liquefied natural gas. LNG has been identified as a major potential export for the U.S., but we lack significant capability to export.

North America isn't quite independent when it comes to natural gas, but it's close. The way things are trending, it is hard to see how the U.S. alone doesn't become a net exporter of natural gas by 2020 considering our low costs and Cheniere's export agreements are already in place.

Oil -- the real challenge
This leaves us with oil, the real nemesis of energy independence in recent decades. In 2005, the U.S. imported 60.3% of the petroleum products we supplied to the market. Since then, net imports has fallen to 42.2% for the first six months of 2012. Projecting how fast this trend will continue involves some educated guesswork, but we can draw some trend lines.

If we do a simple calculation to find the rate of reduction of imports from 2005 to 2011, we find that we've reduced imports by 2.6% per year over that time. A continuation of this trend would leave us independent of foreign oil by 2028. But since the rate of change has accelerated, we could use a more recent date, like 2008 to build a trend line. Since net imports have fallen from 57% in 2008 to 44.8% in 2011 we could predict that this trend continues and we reduce net imports by 4.1% of product supplied per year, leaving the U.S. petroleum independent by 2022.

If we use the same regressions used above and assume percentage of product from Canada and Mexico remains constant, North America could be independent of petroleum imports by 2023 (using the 2.6% rate discussed above) or 2017 (using the 4.1% rate).

But will our fast growth of oil production continue? Chesapeake Energy , ExxonMobil, and nearly every other driller is moving toward liquids production from focusing on natural gas in recent years. The number of rigs drilling for oil in the U.S. has exploded in the last two years (which can be seen in the second chart in the article found here), meaning that more production is likely on the way.

Based on the current trends, not only does North American petroleum independence seem possible, it seems likely by 2020 given current trends.

A few factors that may help
I've highlighted coal, natural gas, and oil, but there are a few things we must consider before closing the book on this debate. Natural gas is becoming a viable transportation fuel, something that will continue to gain momentum over the next eight years. Clean Energy Fuels , Chesapeake Energy, and General Electric are all building out infrastructure to expand its viability and Westport Innovations is providing engine technology to make the switch for freight and consumer vehicles. As these companies build out infrastructure and make the technology of vehicles more attractive it could help reduce our demand for oil in favor of a more abundant local energy source -- natural gas. How fast this takes place is up in the air, but it will likely help reduce our reliance on oil imports further.

Renewable energy is also becoming a real alternative to other electricity generators. Solar installations grew 109% in 2011, and while a small fraction of the electricity generated in the U.S. comes from solar, it shouldn't be discounted in a long-term projection. Solar won't have an impact on oil use by 2020, but it could affect coal and natural gas consumption, helping keep prices low and assisting a move to natural gas transportation fuel.

Foolish bottom line
Based on current energy production and trends well established in the energy industry, I don't think  North American energy independence is out of reach by 2020. In fact, I would be surprised if we didn't reach that goal.

If conditions are right, we even have an outside shot at U.S. energy independence by 2020.

If you want to know more about how Clean Energy Fuels could help change our energy picture, check out our premium report on the stock. It comes with a complete look at the company's opportunity and risks. See if it's right for you by finding out more here.