Alcatel-Lucent (NYSE: ALU) had it rough in 2012. Shares of the telecom equipment maker fell 18% even as the S&P 500 benchmark gained 14%. Heck, Lucent has a tough half-decade in the rear view mirror. Over the last five years, the stock has plunged a heart-stopping 76%. The networking sector is lagging the broader market as a whole, but Alcatel is one of the worst performers in an already weak industry:

At these price levels, Alcatel-Lucent starts to look like a tempting takeover target. But what would a presumptive buyer get?

Upside and downside
Telecoms the world over were expected to invest billions of dollars in infrastructure equipment last year, but the never-ending worries about fiscal collapse in Europe and elsewhere kept pushing those investments further and further back. So the networking renaissance everybody had expected never came.

And ever since the Alcatel-Lucent merger, the combined company has been saddled with a downright stressful amount of fixed costs. That pressure made death threats out of the challenges facing the entire industry. Allow me to demonstrate in song! ...no? Okay, how about with a chart? 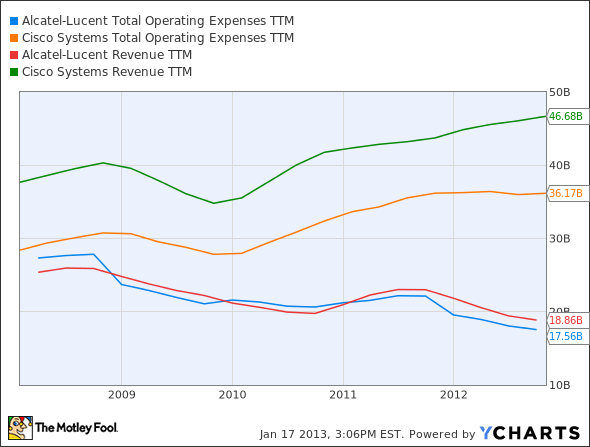 In short, Alcatel spends pretty much all of its revenue on operating costs, leaving no room for profit, structural improvements, or even manufacturing costs. Juniper and Ericsson share this problem to some degree, but Alcatel is simply the poster boy for insufficient operating income. Cash flows often dip below the breakeven point, and Alcatel has $2 billion more debt than cash on its balance sheet nowadays. 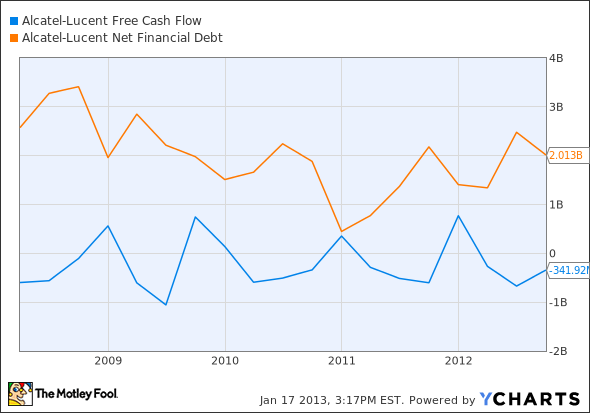 Who do you love?
That being said, management started cutting costs in a big way last summer, and the effort is showing some results. Most importantly, the company didn't slash its crucial research and development budget to meet its budget goals. So Alcatel hasn't destroyed its future just to survive in the present. Investors responded to the improvements by boosting share prices a staggering 69% in the last three months. That newfound moxie just might be enough to attract a buyout deal.

Cisco would be the only rival with enough financial gusto to make an Alcatel buyout work. But Cisco chief John Chambers has promised to simplify his operations, not bulk up on another major acquisition.

That leaves private equity on the table. Deal financing is easy to come by at low, low interest rates, so 2013 could go down in history as a record year for leveraged buyouts. Dell (NASDAQ:DELL.DL) is getting the party started, if its discussions with Silver Lake Partners go anywhere. You could argue that Alcatel-Lucent is the Dell of the networking world, laser-focused on a market that's out of favor right now.

It's a risky bet, but I wouldn't be surprised to see a private equity offer this year, somewhere around the $3 per share. It's by no means a sure thing, because it'll take some doing to whip Alcatel into shape even with a fresh source of capital. If you invest here, please don't take out a second mortgage to finance the position -- only use money you could afford to lose, in case the dreams of buyouts and turnarounds never come true.