After a third consecutive week of stock market gains, the Dow (DJINDICES:^DJI) and the broader S&P 500 Index (SNPINDEX:^GSPC) both closed at five-year highs on Friday. Conversely, the VIX index (VOLATILITYINDICES:^VIX) registered its lowest closing value in over five-and-a-half years. The VIX, which is derived from option prices on the S&P 500, is a measure of investors' expectations for stock market volatility over the next 30 days.

A golden bubble bursts
Thirty-three years ago today, on Jan. 21, 1980, gold reached $850 per ounce, its all-time high on an inflation-adjusted basis. The momentum of the final spike in prices was tremendous: During the first 11 1/2 months of 1979, the price of gold had doubled to $457; over the next 36 days, it came close to doubling again (+88%). The next day, however, the price gold fell 13%; over the following years, the loss amounted to nearly two-thirds.

The causes of the bubble are clear, in hindsight. Advanced economies had suffered the ravages of inflation during the 1970s and political tensions were at a high at the beginning of the 1980s: The Soviet army had just invaded Afghanistan the previous month and the hostage crisis at the U.S. embassy in Iran had erupted one month prior to that.

Finally, there was an important financial condition that fueled the gold bubble: Negative real interest rates. The following graph shows the yield on the 10-year U.S. Treasury minus the rate of inflation over the prior year: 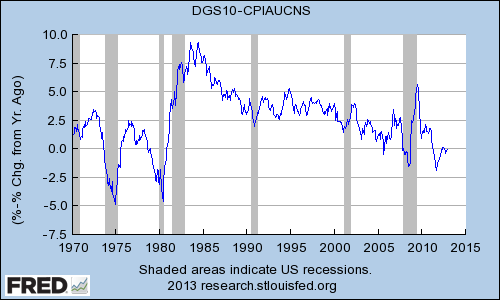 Today, real interest rates are also negative. On Thursday, the real yield on the 10-year TIPS (Treasury Inflation-Protected Securities) closed at -0.64%, up from their all-time low of -0.86% achieved in October (TIPS were introduced in 1997.) The world is not devoid of political risks today, nor have all fiscal and structural challenges been addressed. However, gold and silver owners, via products such as the SPDR Gold Shares (NYSEMKT:GLD) and the iShares Silver Trust (NYSEMKT:SLV) ought to consider that if rates continue to normalize and anything other than a disaster scenario occurs, their losses could be horrific as the precious metals revert to prices nearer their historical inflation-adjusted averages. My best guess is that gold's all-time nominal high above $1,900 from Sept. 2011 will remain unchallenged for some years -- and longer once you account for inflation.