This is a hypothetical look at what might occur for the rest of 2013, as written from 2014. These are only "educated guesses," but each bearish forecast is backed by relevant data. Check back tomorrow for the bull take on the coming year.

While 2013 felt like it got off to a good start, with the Dow Jones Industrial Average (DJINDICES:^DJI) off to its best start since 1997 and Congress acting at least somewhat responsibly in avoiding the brunt of the fiscal cliff, things went downhill fast. Pushing off the majority of budget decisions for a few months did little for short-term or long-term growth, outside of the short-lived January rally. The lack of solid decisions from our representatives cast a pall on markets, dampening any positive market sentiment from new domestic energy and a stable housing market.

Congress consternates
After pushing the budget decisions off a few months and then delaying any agreement on the debt ceiling, Congress set the precedent for all future legislation. Like shortsighted markets, politics tied itself to the next election cycle, and gridlock took over.

Even though senators and representatives were supposed to have their pay withheld until their respective chambers approved a budget, they were even able to delay this self-imposed punishment. Practice, apparently, does make perfect.

Profit margins fall
Corporate profit margins, at all-time highs in 2012, fell back to the historical average in 2013. And, unfortunately, as earnings fell, so did stock prices. While corporate profits as a percentage of GDP entered 2013 at around 11%, they ended 2013 at a historically in-line average of 6.2%: 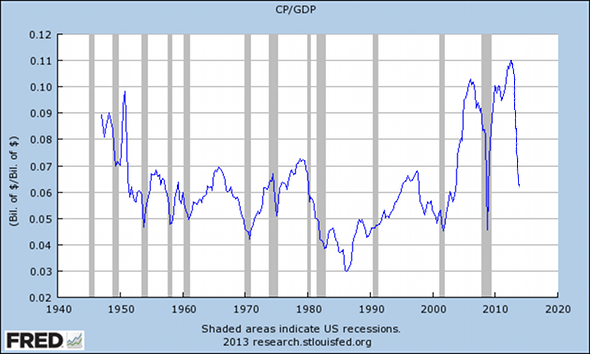 The most popular example of falling corporate profits for the year was Apple (NASDAQ:AAPL). The star of 2012, Apple found itself out of favor in 2013 after its first earnings report for 2013 revealed its gross margin declining from about 45% to 39%. The incredible churn in the cellphone industry's players scared investors into forgetting any growth story -- until the company revealed what, exactly, was in its product pipeline. After investors realized the company would be more than cellphones and Steve Jobs-era products, it delivered gains in line with its industry.

While the Dow didn't end the year down around 3,000 to 5,000 like Harry Dent predicted, it failed to reach its record close of 14,164 as the first earnings of the year came in mixed. The index ended the year giving up its early gains and remaining around 12,000 with no clear political resolution.

The Fed gets more creative
Given a stalling market, any Federal Reserve action would seemingly have been hampered by its near-zero rates. However, beyond open-ended quantitative easing ("QE infinity"), Ben Bernanke began to order Federal Reserve branches to double their employees. Bernanke was heard screaming "Every little bit helps!" outside his office window while throwing dollar bills into the street.

Another drought
The drought of 2013 seemingly began before the growing season even started. As soil fought to revive itself over the winter, there was just too little precipitation in vast areas of the U.S. Because the U.S. supplies roughly 40% of the world's corn, 10% of the world's wheat, and 30% of the world's oil seeds, the American drought caused global food prices to spike. As basic food expenses ate up more of the developing world's income, unstable regimes fought with discontent citizens, while Americans themselves spent more of their paychecks on groceries.

Inescapable debt
While household debt service (things like monthly payments on loans) was relatively low, the total household debt as a percent of disposable income was still too high for consumers to comfortably begin spending like before:

After living through the pain of the Great Recession, households kept shedding debt and avoided spending outside of their means. While a smart move for households, this behavior did nothing for the economy and the stock market.

There were still winners
Even with the overall economy in a haze worse than Shanghai's, a few companies did beat the market over 2013. Starbucks (NASDAQ:SBUX) easily passed on the price increases of a smaller-than-normal coffee crop because its customers literally get a headache without its product. In 2012, CEO Howard Schultz attempted to get politicians to come to an agreement through inspirational messages on coffee cups. In 2013, the company was on track to meet its goal of 3,000 more stores by 2017 in the Americas, all while doubling the number of international channels to sell its products outside of Starbucks shops by 2015. While some asked whether a coffee company could be worth $40 billion, others pointed to the burger chain worth nearly $100 billion.

Additionally, Sociedad Quimica (NYSE:SQM) proved a good bet on chemicals as the top lithium miner (not to mention its fertilizer segment). Both batteries and food were in great demand in 2013, helping the company build on its 30% earnings growth in 2012. The company's dividend yield of more than 2% also enticed investors as interest rates remained low.

A hypothetical journey
Forecasts are nearly impossible to get right, as you have to guess not only what will happen, but when. There are plenty of things to be fearful of in the future, but there are also many unknowns that could surprise us for the better -- like congressional accord.