After peaking last year with a $663 billion market cap, Apple (NASDAQ:AAPL) has given up the crown. That title now belongs to ExxonMobil (NYSE:XOM), which first gave up the lead to Apple in August 2011. Apple's incredible pullback of over 35% from its highs has seen it lose over $250 billion in valuation, and it's now back to "just" $412 billion.

That's more than rival Microsoft's (NASDAQ:MSFT) market cap, which currently sits at $233 billion. Over the span of four months, Apple has lost an entire Microsoft. The software giant's market cap peaked prior to the tech bubble pop at $604 billion. However, one big difference is that Microsoft's P/E at the peak was an incredible 73, while Apple's was just 16.

Exxon has mostly just been waiting idly by, as it hasn't seen any dramatic changes in its market cap over the past year. The oil giant currently carries a $422 billion valuation. Apple passed Exxon on the former's trip down today as it sells off by another 3%, losing over $12 billion in value in the process. 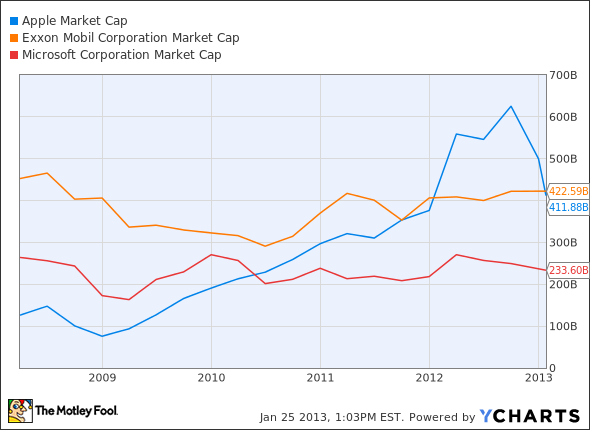 Apple's meteoric rise even spurred talk that the Mac maker could one day become the world's first trillion-dollar company, including from me. I wasn't alone, as many analysts and investors even speculated that Apple would get there. Famed hedge fund superstar David Einhorn is still bullish on Apple, and last May said he couldn't find "any prohibition on trillion-dollar market capitalizations." Topeka Capital Markets analyst Brian White even suggested Apple could be worth multitrillions, adding that he "would not be surprised" if it happens one day.