After five years passed out face-down in the mud, housing is rebounding. Not necessarily housing prices, mind you, but housing construction, which is a big historic driver of economic growth. This is good news for everyone, and the rebound could have a ways to run.

The story is simple. Housing construction fell to such low levels over the last few years that it has to now rise substantially just to keep up with population growth and household formation. As Michelle Meyer of Merrill Lynch pointed out last week, "from 2009 to 2011, housing starts only slightly exceeded the pace of demolitions." As the population grew, that dearth of new building soaked up the excess homes built during the bubble. Housing inventory is now the lowest it has been in almost a decade, and home builders are suddenly experiencing something they haven't known for years -- demand! -- as tight markets hasten the need for more homes. Housing starts were up 37% in December from the year before.

How much longer does this rebound have to go? A ways, I think. Housing starts are still more than a third of what will be needed to keep up with current levels of household formation.

The impact returning to a more balanced level of construction, where as many new homes are built as new households are formed, would have a big impact on the economy. As Floyd Norris of the New York Times wrote last week:

Last year there was a total of 780,000 starts. That was the highest in four years, but it was still lower than would have seemed possible a few years ago. Imagine if that total rises this year to 1.28 million, an increase of 500,000, and that each house involves an investment by the builder of $250,000. That would add an additional $125 billion to the economy compared to 2012.

Another way to think about this is residential investment as a share of the economy. Here's how that's looked historically: 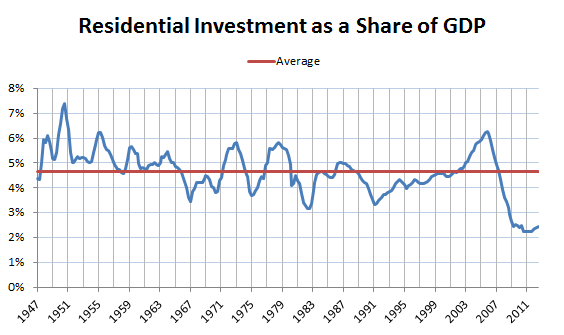 This chart goes through the third quarter of 2012; when new data comes in, it will be slightly higher. But we're still far below average. And just returning to that average would be a huge tailwind to the economy, adding roughly $300 billion to economic output over 2012.

Compared with the last five years, that changes everything. It creates jobs, it lowers budget deficits, boosts confidence and generates wealth.

Home builders obviously enjoy the biggest boost from this trend. For investors, the problem is that most homebuilding stocks have already surged over the last year, some more than doubling in value. I'm hearing more and more from investors who think the run in homebuilder stocks has gone too far. They point not only to the explosion in share prices, but to what look like sky-high valuations. MDC Holdings (NYSE:MDC) trades at 26 times earnings. NVR (NYSE:NVR), 30 times earnings. PulteGroup (NYSE:PHM), more than 50 times earnings. These are normally the kind of multiples you'd expect to see at the top of a boom, with future good news (and more) already priced in.

But I think you have to be careful with that assumption.

Home builder stocks consistently looked cheap during the housing bubble. In 2005 and 2006, DR Horton (NYSE:DHI) rarely traded for more than 10 times earnings, causing some to think it and other home builders were bargains. Oops. While valuations looked cheap, earnings were grossly inflated as housing construction far exceeded long-term demand.

Today I think we're in the opposite situation. Valuations may look expensive, but earnings are still depressed as housing investment remains at a fraction of historic norms. If new home construction doubles from 2012 levels -- about what's needed to keep up with household formation -- some home building stocks that look expensive today could have plenty of room to run.