Netflix (NASDAQ:NFLX) sure had a busy day at the bank Tuesday.

In the morning, the digital video maven announced that it would raise $400 million by selling senior debt notes. The move was not a surprise, since the company pre-announced its intentions to do this in last week's earnings report, including the plan to retire some old debt at an uncomfortable 8.5% interest rate.

CEO Reed Hastings said that he'd leverage the generous lending climate and low interest rates to "give us additional reserves as well as increased flexibility to fund future originals."

So Netflix just followed through on a recently disclosed idea, possibly to make a larger bet on homemade shows. The exact amount, however, was news to investors.

But then we had to forget even that tidbit later the same day. Netflix moved straight into pricing the new debt notes just a few hours later, setting the interest rate at 5.375%. Oh, and adding another $100 million to the cash value. But that's not all: SEC filings show that the $200 million in convertible notes will be exchanged for about 2.3 million freshly printed shares as soon as practicable.

That 4% dilution event will happen once Netflix shares have traded above $111.54 for at least 50 trading days in a 65-day period. Look for that announcement sometime in March, assuming that the stock stays afloat long enough.

The net outcome of all this wrangling is that Netflix immediately increased its long-term debt load from $400 million to $700 million, but expects it to drop back to $500 million when the convertible notes go away. Interest payments on the new senior notes will be comparable to the interest paid on the much smaller loan they replaced.

CFO David Wells described this refinancing and cash-conversion action as an opportunistic reaction to low-cost lending of historic proportions:

It's really based on the 20-plus year low that we see in the debt market. It's a good time to lock in very low-cost, long-term capital. So we'd be remiss in not looking at that opportunity.

This echoes the sentiment from former company spokesman Steve Swasey, regarding the 2011 loans. "We don't think we need the money, but it's nice to have more money than you need," he said.

But more debt can be scary. Wedbush Securities analyst Michael Pachter -- a noted Netflix bear -- warned his customers that the cash grab looks desperate: "Investors should be troubled by the $300 million addition to debt and the unexpected $100 million increase in principal amount," he wrote. "The increase in debt, coupled with the company's intention to force conversion of its outstanding $200 million convertible issue, indicates to us that free cash flow from the business is quite weak, and far worse than we previously envisioned. We believe the company has virtually no chance of generating positive FCF for the year."

Pachter bristled over the original debt load, too. "It's essentially saying, "'We expect to continue to have cash-flow problems for a long time,'" he said in 2011. "It's a bad deal for shareholders and it looks desperate."

Did Netflix prove him right or wrong? A quick glance at the cash flow trend since 2011 sure doesn't paint a flattering picture: 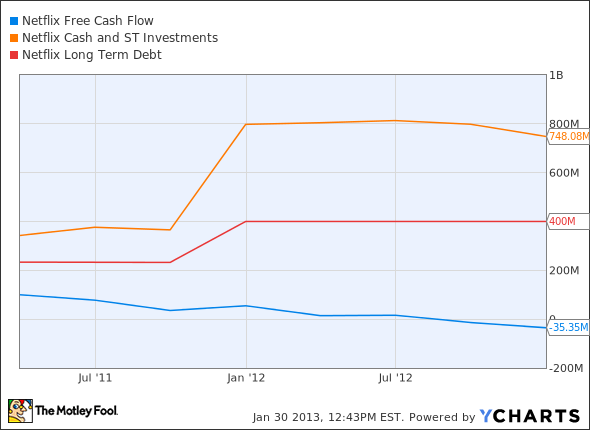 Okay, Netflix has indeed been spending money quite freely. Then again, it took on that first haul of loans just as the service launched across Latin America and the Caribbean. The British Isles and Scandinavia soon followed suit.

These international expansion moves don't come for free, you know. It's not so much about operating costs, since bandwidth is nearly free these days and Netflix runs a lean back-end service on cloud servers rather than building data centers. But every new market requires a fresh batch of license agreements with local and global content providers. And then there's the marketing bill. You can't just build the service and hope that customers will find it on their own -- bootstrapping a brand-new geographic market can be expensive.

The final blow?
"Negative cash flow will likely continue as long as the company pursues its money-losing international expansion," Pachter wrote, as if twisting his knife in an already expired corpse.

But this actually is where his theory really breaks down.

The Canadian market turned profitable in less than two years. Latin America and the European outposts should do likewise -- perhaps a bit slower or a little faster, but in the same ballpark. The costs may look high now, but will vanish in a sea of serious cash flows over the next couple of years. That will not only show investors what this long-term plan really is worth, but should also let Netflix expand even faster across the globe.

You ain't seen nothing yet.

So yeah, Netflix is investing in future growth right now. Michael Pachter calls it a cash crunch, but I call it building the future. May I remind you that even Apple (NASDAQ:AAPL) reported negative cash flows as it moved out of the iPod era, into the fantastically profitable iPhone epoch? Those temporary dips into cash reserves set the stage for fantastic sales growth -- and the rest is history: 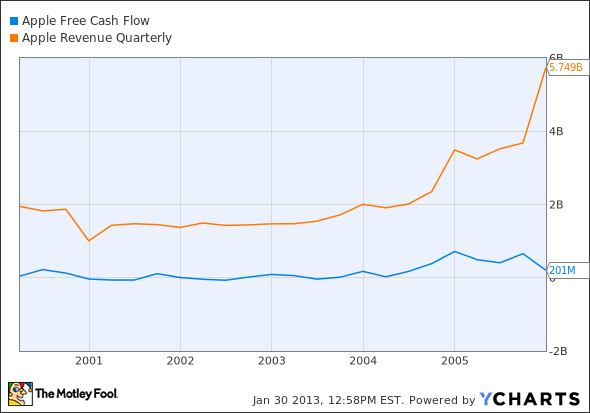 Am I comparing the Netflix of 2013 to Apple at the start of the iPhone revolution? You bet I am.

Mr. Pachter may look smart in the short term, but he will ultimately be proven wrong by an amazing long-term growth story. If you're looking for the next Apple-style hyper-growth stock, I simply can't think of a better candidate than Netflix right now.