Stop me if you've heard this one before: the PC is dead. This has been a recurring debate in the tech world for years. Plenty of digital ink has been spilled right here on Fool.com trying to prove and disprove that notion. Investors would be surprised at how much has actually happened over the past three to four years.

Apple (NASDAQ:AAPL) has proclaimed that we're now entering the "Post-PC" era, but Microsoft (NASDAQ:MSFT) thinks it's more like "PC-Plus." I'll show you one simple chart that proves the PC is dead.

Three for the price of one!

First, I have a little confession to make. I've misled you a tiny bit; there's actually more than one chart for us to go through, but don't worry, we'll get to it. I've compiled four years of quarterly historical data from IDC on the smartphone, tablet, and PC markets and created a handful of charts to make my case.

These are worldwide PC unit shipments over the past four years: 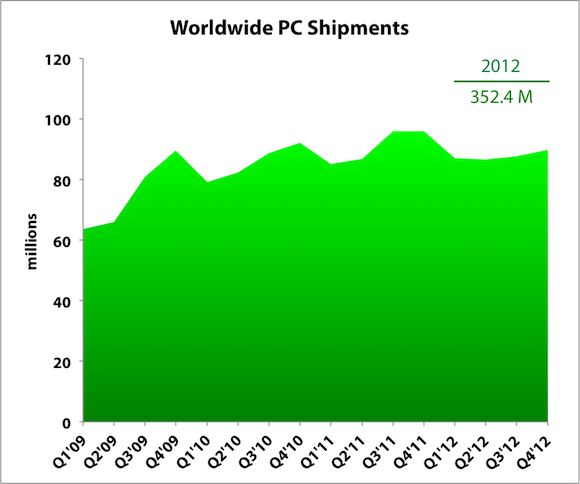 I know what you're thinking right now: "Reports of the PC's death are greatly exaggerated." Sure, the PC market isn't growing like it used to, and total unit shipments in 2012 came in at 352.4 million. That's still a big market any way you slice it, and units were down only 3.2% from the 363.9 million units that were moved in 2011. "Death" may seem a little dramatic for an annual decline of "just" 3.2%.

The previous chart is not the problem, though. This one is: 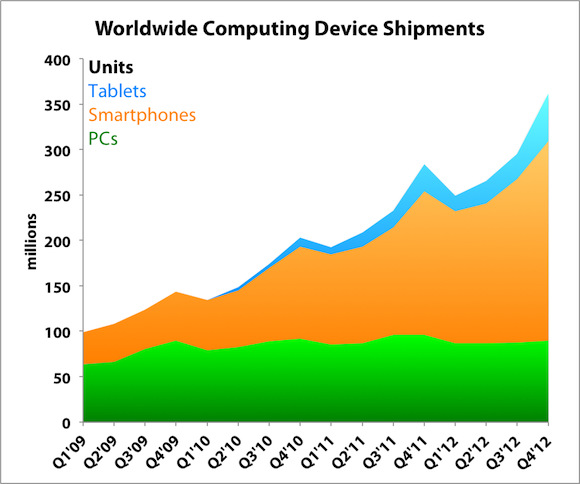 While the overall PC market is down marginally, smartphone and tablet units have absolutely exploded. If you think about the computing landscape today, these three categories of devices represent the primary ways in which people compute and connect. Back in 2009, PCs really were the dominant form factor used in computing, and the smartphone market was still nascent and a relatively niche segment of the broader mobile phone market, even after Apple revolutionized the industry in 2007 with the iPhone.

There's much debate over how viable an alternative tablets currently are to PCs, but this is a classic textbook case of disruption happening before our very eyes, where a new technology invades from below before it can satisfy mainstream performance needs. Over time, the new technology improves on performance and moves up-market once it reaches performance parity (usually with cost advantages), causing the incumbent technology to retreat upwards into higher-performance niche segments.

This is the true threat to the PC, as widespread global adoption of smartphones and tablets can arguably replace the PC for most users' casual needs. Soon, tablets will replace most consumer PCs. The first sign that this is happening will be extended upgrade cycles, followed by minimal consumer PC upgrades. PCs will always have a place in enterprise and higher-performance professional segments, but the mainstream consumer is shifting to mobile -- fast.

If we look at the broader market for computing devices through this lens, the PC's share has absolutely plunged. This is the chart that proves that the PC is indeed dead. 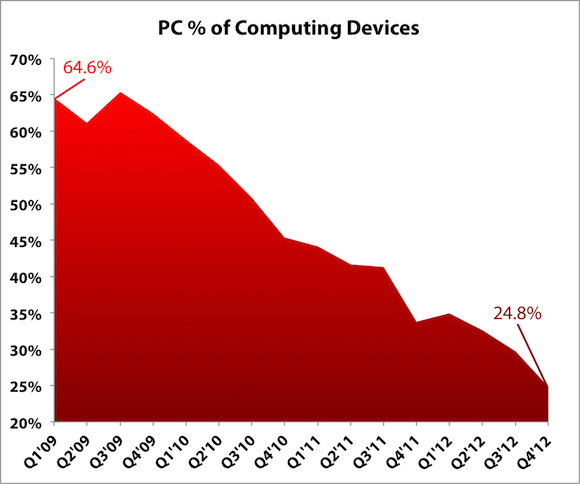 At the beginning of 2009, the PC comprised nearly two-thirds of all computing devices, with the rest being smartphones. Then Apple introduced the iPad in Q2 2010 and jump-started the tablet market, which has now grown to 122.6 million units in 2012. In less than three years, the tablet market is now already a third of the PC market in unit terms.

Mobile device adoption shows no signs of slowing down, and now PCs are just a quarter of all computing devices sold today. That's an incredible decline in the PC's share of the computing market over the span of just four years. This is what people are talking about when they refer to the death of the PC.

One for the road
How do Apple and Microsoft play into all of this?

Microsoft continues to dominate the PC landscape. Linux market share tends to hover around 1% and Apple was about 4.8% of the global PC market last year. That leaves the remaining 94% or so of PCs running Windows. Smartphone OS figures for Q4 2012 have not been released yet by IDC, but Windows Phone and Windows Mobile market share is typically between 2% to 3%.

Only in the fourth quarter did Microsoft officially enter the tablet market meaningfully with Windows 8 and Surface, and IDC pegs Q4 Surface units at 900,000. In December, IDC estimated that Windows would garner 2.9% of the tablet market in 2012.

When you put all of that together, Microsoft owned about 30.3% of the entire computing device market in 2012. Back in 2009 when the tablet market didn't exist, that figure was 64.2%. That's a remarkable drop in Microsoft's total share of the computing market.

In contrast, while Apple has always been a small player in the PC market, it's been the defining company of the smartphone and tablet markets. While Microsoft was seeing its share of computing decline, Apple's has more than tripled, from 6.1% to 20.7%. 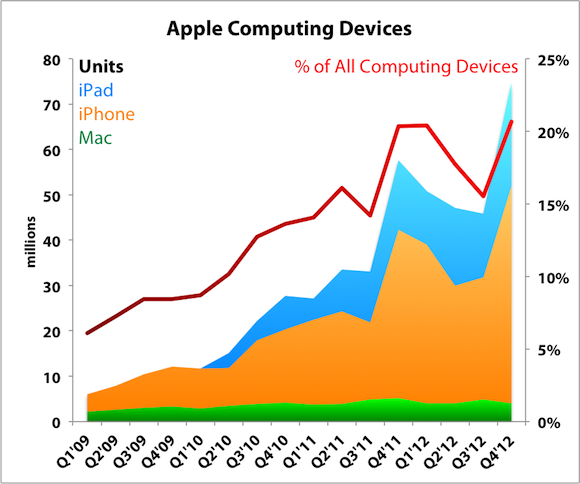 Tim Cook has long voiced his belief that the tablet market will soon eclipse the PC market as part of the "Post-PC" rhetoric. So far, it's playing out more like Apple envisioned it instead of how Microsoft saw it going.