Last Thursday morning, United Continental Holdings (NASDAQ:UAL) reported a Q4 2012 adjusted loss of $0.58, which slightly beat the analyst consensus for a loss of $0.61. Even though this represented a reversal from adjusted EPS of $0.30 in the same period of 2011, shares initially rallied to a new 52-week high above $26. 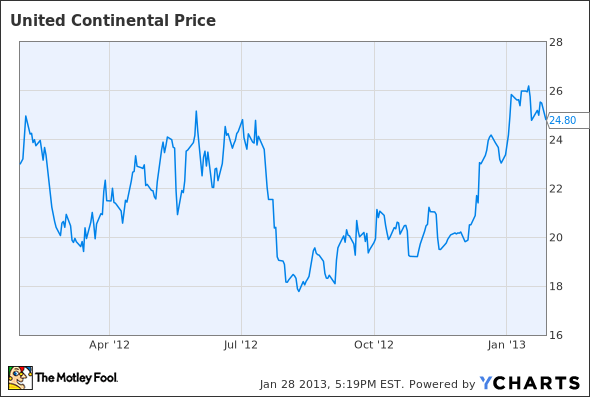 However, United is not a company that you should invest in at this point. In fact, it is a classic airline "value trap."

What is a value trap?
In short, a value trap is a stock that looks cheap at first glance, but is likely to drop even further, usually because analysts and investors have overestimated the company's future earnings potential. Investopedia states: "[Value] traps attract investors who are looking for a bargain because these stocks are inexpensive. The trap springs when investors buy into the company at low prices and the stock never improves."

Based on analyst estimates as of Jan. 28, United's forward P/E was approximately 6.5, so the stock is definitely cheap by traditional metrics. However, United has a recent history of disappointing analysts and investors. In March 2012, analysts expected adjusted EPS of $4.81 for FY12. When United finally reported its full-year results last week, adjusted EPS was only $1.59. This 67% EPS shortfall makes United much more expensive than it appeared just 10 months ago. Unfortunately, United appears to be on track for another disappointment this year.

Competitors are getting stronger
The merger of United and Continental was supposed to create "revenue synergies" as customers would be willing to pay a premium to access the company's industry-leading route network. However, in 2012, United underperformed each of its legacy competitors: Delta Air Lines (NYSE:DAL), US Airways (NYSE: LCC), and American Airlines. United's passenger revenue per available seat mile (or PRASM, the most common metric for measuring airline revenue performance) grew only 1.7% in 2012. By contrast, PRASM grew 3.9% at US Airways, 5.8% at American, and 7% at Delta.

These competitors have done a remarkable job of taking share from United over the past year. Furthermore, they are not standing still. In 2011, United and Continental were behind every other major carrier in the Airline Quality Rating survey, a well-respected measure of operational performance and customer service. In 2012, United Continental's performance deteriorated, but competitors improved. For example, Delta reported significant improvements in on-time performance, lost baggage, and customer complaints, while US Airways hit record highs in on-time performance, completion factor, and baggage handling.

Additionally, competitors are improving their route networks to compete better with United for business travelers. Delta recently bought a 49% stake in Virgin Atlantic and the two are forming a trans-Atlantic joint venture, which will give Delta much better access to London's Heathrow Airport, a key business market. Most industry analysts expect American Airlines and US Airways to merge this year, which would help them gain the scale to compete against United and Delta. United investors can hope that American and US Airways hit major integration snags, but "hoping" usually isn't a good investment strategy! With the competition firing on all cylinders, United may have trouble winning back passengers.

United poised to disappoint again
Stepped up competition has clearly magnified United's problems over the past year. In 2013, United will see pressure from a different direction: labor cost increases. In order to derive the full benefits of the merger, United needed to integrate its various work groups and sign new labor contracts with its unions. The company made progress on this front over the course of 2012, most notably completing a new joint contract with its pilots during Q4.

However, these agreements come with a price. Many of these labor groups have not received raises in several years. As a result, labor costs are growing rapidly as the new contracts go into effect. For example, the pilot contract included a $400 million lump sum payment (roughly $40,000 per pilot) and an average pay raise of 43.2%. Largely due to the scale of these pay increases, United's cost per available seat mile, or CASM, (excluding fuel costs and other special items) will increase by approximately 5% in 2013, and 8%-9% in Q1. Even though fuel prices are expected to be slightly lower year over year, United is projecting a 5% consolidated CASM increase in Q1.

In order to maintain approximately the same Q1 profitability as last year, United would need to see PRASM rise by a similar amount (i.e. 5%). However, on the earnings conference call, management predicted a 2.5% gain for January. Unless United can really turn things around in February and March, it will accrue an even bigger loss than last year's $0.87 adjusted loss per share. However, the current analyst consensus calls for United to more than double its adjusted profit in 2013. Bottom line: Investors will need to trim their expectations once again.

Conclusion
With costs still growing faster than revenues, United is on pace to lag competitors in profitability again in 2013. Investors should be careful not to fall into a value trap, as 2013 EPS is likely to fall short of the current analyst consensus.