As a starting point in my search for new ideas, I often look for companies with strong earnings yields and high returns on invested capital.

Why? Businesses with high returns on invested capital usually possess durable competitive advantages and demonstrate a knack for creating value for shareholders. When these companies also sport strong earnings yields, they often represent great potential opportunities for investors to beat the market.

This in mind, Dolby Laboratories (NYSE:DLB) has piqued my interest following its strong earnings report last Monday. Of course, Dolby isn't exactly a new idea; thanks to persistent worries about declining revenue in its core segments, the undervalued 47-year-old audiophile occupied a spot in my screens for the better part of 2012.

Even still, as evidenced by the quick 6% pop in its shares after the announcement, Dolby's numbers were undeniably solid, as it bested analyst estimates by $0.05 with first-quarter earnings per share of $0.50. Dolby's quarterly revenue of $236.6 million also beat estimates of $221 million and, though the company issued relatively conservative guidance for the current quarter, it also raised the lower end of its full-year revenue guidance and now expects to see revenue for fiscal 2013 between $910 million and $950 million. Despite the encouraging numbers and the initial pop, however, Dolby quickly gave back the gains as investors remained unconvinced the worst is over.

Before we dig further, let's see how some of Dolby's latest key metrics stack up to its closest publicly traded competitor, DTS (NASDAQ: DTSI):

Even after spending more than $400 million in December to pay a massive $4 per share dividend, Dolby still sports a sterling balance sheet with no debt and $743 million in cash reserves. In addition, its current price-to-earnings ratio of 13 gives it a respectable earnings yield of 7.69%, and it remains solidly profitable with gross margin of more than 89% and net margin just under 22%. Lastly, Dolby's ROIC of 14.49% shows it's still capable of creating shareholder value by reinvesting capital in its business.

At first glance, competition doesn't seem to be much of an issue. Considering the table above, the comparison between Dolby and DTS doesn't seem very fair. Heck, Dolby's cash reserves are twice as large as DTS' entire market capitalization, and DTS still hasn't fully recovered from its most recent quarter's $19.1 million loss despite a year-over-year revenue increase of 8%. However, the loss was primarily due to the accounting treatment of its July acquisition of SRS Labs. When the two smaller companies are finally integrated, you can be sure they'll do everything in their power to give Dolby a good fight.

What gives?
So let's get this straight: Dolby holds a massive size advantage over its competitors, is cash-rich, has a decent earnings yield, boasts healthy margins, and achieves seemingly strong returns on invested capital. Why, then, is the stock still trading 30% below its 52-week-high set last May?

Let's turn to a table that might be helpful: 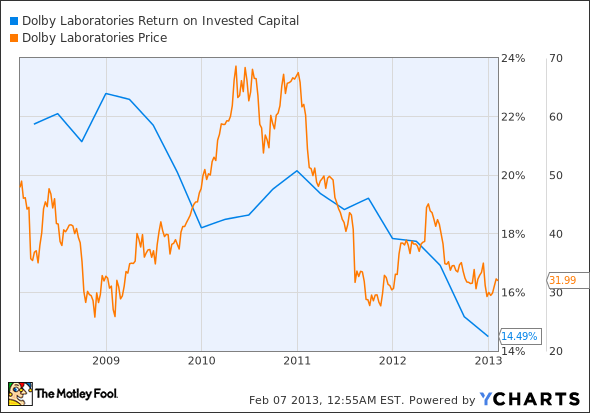 First of all, while its ROIC seems healthy, it's important to note the number is the lowest Dolby has seen in the past five years.  In fact, apart from the improvement in 2010 -- during which the share price incidentally spiked -- returns on invested capital have steadily marched downward.

So what's happening? While Dolby has shown encouraging progress in newer initiatives like Dolby Atmos in the cinema and Dolby Voice to improve teleconferencing, these categories certainly won't sustain the business anytime soon.  In short, with a mobile and tablet boom firmly under way, Dolby's still in the dog house because investors fear the company won't be able to transition out of its current state of over-reliance on the stagnant PC, gaming, and consumer electronics markets.

To be sure, PC revenue was still responsible for 29% of Dolby's licensing and were flat from the prior year, and consumer electronics and gaming made up about 17% and 10%, respectively, with each category down 12% year over year.

The upside
Meanwhile, mobile revenue was up a whopping 35% from the year-ago period and made up 11% of licensing in the most recent quarter, and Dolby's tech is now present in one-quarter of all tablets and smartphones, thanks largely to Qualcomm's decision early last year to integrate support for the Dolby Digital plus platform directly into its Snapdragon mobile chips. In addition, Amazon.com is using Dolby's audio tech to differentiate its Kindle Fire HD devices from the rest of the tablet pack. This not only bodes well for Amazon's own future high-margin digital sales, but also helps Dolby dispel the notion people shouldn't expect decent sound from their mobile devices.

In another bright spot, broadcast revenue now represents more than 33% of licensing and rose more than 9% from the first quarter of 2012. While Dolby has permeated the U.S. and European markets for broadcast sound, it's now placing an increased focus on integrating new solutions like its format for consumer 3-D without glasses. In the rest of the world, where broadcast development is finally picking up steam, Dolby is nicely positioned to ensure its standards are adopted as more countries convert to digital television.

The verdict
Even if Dolby's core PC and consumer electronics markets continue to deteriorate, long-term investors can sleep sound knowing the company has laid its foundation for success in new markets going forward. In the end, while the most recent quarter's results weren't quite enough to convince Mr. Market of a full-fledged turnaround, I think it's time to blow that whistle and let this dog come inside.

Is Dolby Out of the Dog House Yet? @themotleyfool #stocks $DLB $AMZN $QCOM Next Article
Current