Exelon (NASDAQ:EXC) reported quarterly earnings yesterday, and the utility is making major moves. Although analysts' earnings expectations were met, the company announced it will slash its 6.8% dividend next year by a whopping 40%. Is this the beginning of the end for this dividend stock, or a better strategy for long-term shareholder value? Let's take a look at this quarter's results, review some long-term trends, and see whether Exelon's still got profits for your portfolio.

Number crunching
Exelon reported $6.44 billion in sales for Q4 2012, missing analyst expectations of $8.26 billion. Although it whiffed on its top line by 22%, the company squeaked by on net income. With $0.64 earnings per share, Mr. Market's expectations were right on the money.

Looking ahead, Exelon expects 2013 to continue the company's downward trend, with EPS guidance in the $2.35-$2.65 range.

2012 in review
In the words of CEO and President Chris Cane: "2012 was a difficult year on the economic front for our sector." To maintain its dividend, the utility cut $2.3 billion of growth investment plans, including nuclear upgrades and other investment targets.

Despite tight finances, the company managed to dole out its $2.10 annual dividend while completing its merger and reinvesting $5.9 billion in capital expenditures. A significant portion of its spending went toward renewables, with 400 MW wind and 330 MW solar added in 2012. Looking ahead, the company will continue clean energy investments (mainly solar), with additional focus on smart grid technology. 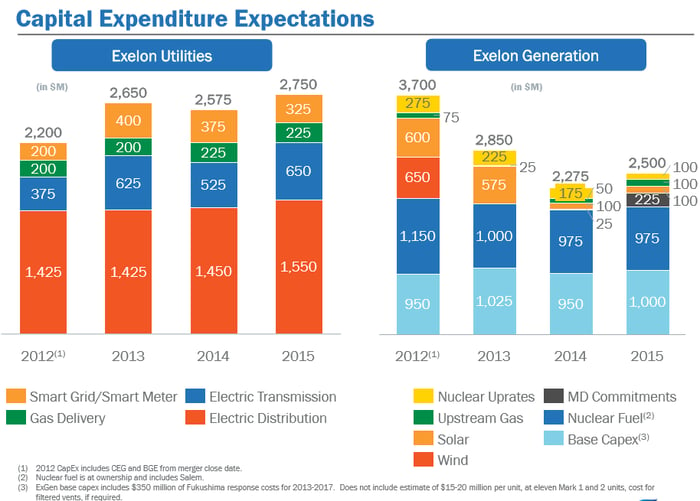 But capital expenditures got their name for a reason – they use capital. In an effort to find financial stability, Exelon announced that, starting in Q2 2013, it would cut its dividend by 40% to $0.31 per share.

We believe that our dividend should be sized to reflect our business model and keep our balance sheet strong. We also think that the dividend might be sized to allow us capacity and flexibility to pursue growth that will enhance the company's long-term value. While we remain confident that there is $3 to $6 of megawatt hour of fundamental upside in the market, it is increasingly clear that we will not see the upside as soon as we had expected.

What's a dead dividend worth?
Exelon's hinted for a while that its sizable dividend might get a haircut, so this most recent announcement should come as no surprise to investors. Although dividend investors will be sad to see its current 6.8% yield disappear, the company's current share price still puts its diminished yield at 4%, on par with the industry average.

Even without the haircut, Exelon's cash puts it in a better (albeit still unsustainable) position than most to deliver dividends.

With Exelon's big plans for renewables, nuclear, and smart grid technology, a penny saved is a penny more that can be allocated toward capital expenditures. Currently, Exelon spends 21% of its sales on self-investment, but that number could move much higher if the utility takes its growth prospects seriously.

We [Exelon] have an opportunity to invest in growth. We cannot do that efficiently if we're leaning on a balance sheet to maintain an 80% to 90% payout level. We are acting now to right-size our dividend to be more aligned with the commodity sensitive nature of our business. After assuring that we have had a strong balance sheet and credit metrics, we'll renew our focus on investing in future growth to enhance long-term shareholder value.

Foolish bottom line
Exelon's stock is down 22% in the last year, and its sector-average price tag isn't accounting for some of the big upside potential this utility could begin to see in the next few years. For long-term investors, an oversized dividend is dead weight, and Exelon just freed itself from the bonds of short-term shareholders. I've made an "outperform" call on my Motley Fool Caps page, and am looking forward to seeing just how much Exelon excels in the coming years.