Business today moves at light speed, and companies that can't adapt to changing global markets fast enough, die off quickly. This is true for even the biggest companies, as 87% of the Fortune 500 in 1955 were off the list 56 years later. For the largest automakers, including Ford (NYSE:F), this should hit close to home. The global vehicle market will be drastically changing over the next decade, and those that don't have strategies for the coming change will be left in the dust. What is the strategy that best serves Ford for success in the distant future? Let's look at the trends and expectations to better understand how they will change the vehicle market.

In KPMG's recent survey of automotive executives, there was a sharp increase in expectations of the next alternative-power vehicle. 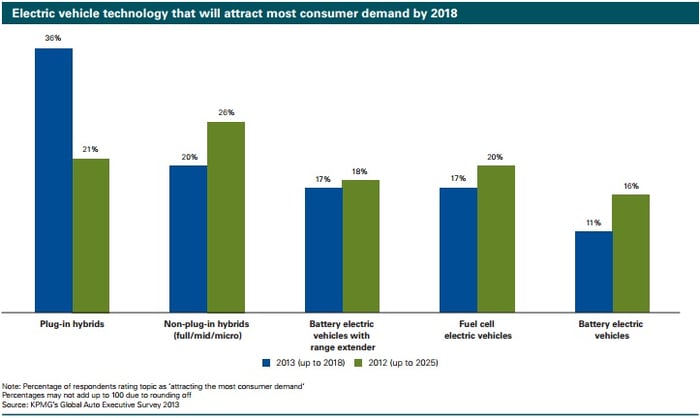 It's clear that fully electric vehicles aren't the savior people once thought, and that plug-in electric hybrids are emerging as a favorite option. If you had to guess how many consumers seriously consider purchasing one when vehicle shopping, what would you say? I would have been off by a long shot. According to C.J. O'Donnell, Ford's electrified-vehicle marketing manager, research indicates it's 60%.

Most companies and investors are so nearsighted, they merely look at strategies covering the next quarter or two. That isn't the case with Ford, as it's putting an electric-vehicle strategy in overdrive because of stronger demand for its plug-in vehicles. Hybrid sales delivered a record January for Ford, which followed a record-setting previous quarter. One focus for Ford is increasing the amount of dealerships that are "certified." In November, only 200 dealerships were certified, and already, that number sits at 900, or about a third of its dealerships. That increase makes the Focus Electric, C-MAX, and Fusion Energi available in all 50 states for the first time. Being certified is an important part of the sales strategy, so let's consider what that really entails.

Dealerships have to meet specific guidelines, including installation of at least two charging stations on-site. There has to be at least one Focus Electric and C-MAX available at all times for demonstrations or events. Eighty percent of certain managers have to have be capable covering advanced topics of electrification. Dealerships must participate in programs that help identify energy- and cost-saving opportunities, as well as reducing carbon footprints. The bottom line is that Ford dealerships must be extremely knowledgeable about the emerging technology to help consumers feel confident about purchasing a plug-in vehicle.

Having dealerships certify to encourage a qualitative sales push for plug-in vehicles is just part of the equation. Ford is also doubling the size of teams focused on fuel efficiency and electrified vehicles, now equaling more than 1,000 engineers. It's doubling the size of its battery-testing capabilities to accelerate electric technology development. A $550 million project will transform a Michigan-based assembly plant into a state-of the art facility that can produce its popular electric and plug-in vehicles.

So with all this focus on plug-in capabilities, why aren't sales increasing more rapidly?

What's holding the market back?
Two things are holding back plug-in vehicles from mass adoption. One is the lack of plug-in vehicle infrastructure, making charging stations few and far between. With the government trying to shrink its budget, it will force other groups to focus on increasing the number of charge stations. That's exactly what Ford had in mind, as it announced in late January that it will join 12 other major U.S. employers in the new Workplace Charging Challenge. The purpose is to collaborate on the infrastructure, increasing charging stations by tenfold over the next five years.

If the collaboration goes as planned, the lack of infrastructure won't be holding the market back much longer, but what else does?

The improvement seen on regular combustion engines has been enough that consumers are content with current MPG offerings. People driving Ford's popular Fusion are getting nearly 37 MPG on the highway, and that's saving enough cash that people aren't jumping to the plug-ins and the large price tag associated with them. This problem will also be solved as time progresses and prices decline.

Bottom line
Businesses that don't adapt, fail. Ford positioning itself well to adapt when demand increases for the next era of vehicles. It's also positioned itself well for success until the next era arrives, with its popular fuel-efficient vehicles and its EcoBoost engines. I feel good about my Ford investment, and I plan to hold it for a long time. The future is not only bright; it's darn near electrifying.