In 2003, Warren Buffett wrote an article in Fortune magazine warning about the country's ever-growing reliance on the rest of the world. With a growing trade deficit, America was auctioning off part of its resources year after year. Buffett wrote:

Our annual trade deficit now exceeds 4% of GDP. Equally ominous, the rest of the world owns a staggering $2.5 trillion more of the U.S. than we own of other countries. Some of this $2.5 trillion is invested in claim checks -- U.S. bonds, both governmental and private -- and some in such assets as property and equity securities.

In effect, our country has been behaving like an extraordinarily rich family that possesses an immense farm. In order to consume 4% more than we produce -- that's the trade deficit -- we have, day by day, been both selling pieces of the farm and increasing the mortgage on what we still own.

To put the $2.5 trillion of net foreign ownership in perspective, contrast it with the $12 trillion value of publicly owned U.S. stocks or the equal amount of U.S. residential real estate or what I would estimate as a grand total of $50 trillion in national wealth. Those comparisons show that what's already been transferred abroad is meaningful -- in the area, for example, of 5% of our national wealth.

More important, however, is that foreign ownership of our assets will grow at about $500 billion per year at the present trade-deficit level, which means that the deficit will be adding about one percentage point annually to foreigners' net ownership of our national wealth. As that ownership grows, so will the annual net investment income flowing out of this country. That will leave us paying ever-increasing dividends and interest to the world rather than being a net receiver of them, as in the past. We have entered the world of negative compounding -- goodbye pleasure, hello pain.

How have we done since then? Here's America's trade deficit as a percentage of GDP: 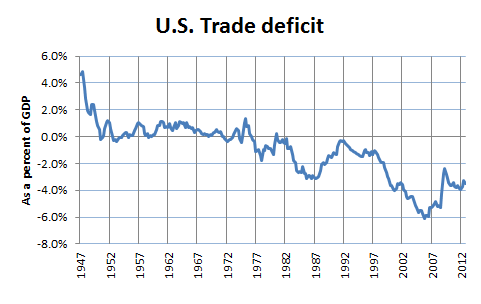 We've made some progress. When Buffett's article went to press, the trade deficit was 4% of GDP. Last year it averaged 3.5% of GDP.

And net U.S. assets owned by non-Americans have ballooned since 2003 to $4 trillion at the end of 2011 (the most recent year we have data for):

Global trade is a wonderful thing, and many recessions and depressions have been caused by governments trying to tamp it down. In 2009, the heads of the G20 signed a pledge stating, "We will not repeat the historic mistakes of protectionism of previous eras."

But trade imbalances can get way out of whack. If America's trade deficit was dangerous when Buffett sounded the alarm in 2003, it's probably dangerous today -- maybe not dangerous in a market-collapse, meet-the-new-depression sort of way, but dangerous in that it diminishes growth prospects at a time when we need every inch of growth we can get.

There's at least one reason to be optimistic that America's trade deficit could start shrinking fast: the energy revolution that has caused U.S. oil production to boom, reducing the need to import crude from around the world. Famed energy analyst Daniel Yergin wrote last year:

The increase in domestic oil production over the past five years will reduce our oil-import bill this year by about $75 billion. The growth of shale gas will save the U.S. from spending $100 billion a year on imported LNG, which was the likely prospect five years ago.

Add to this that higher shipping costs, much higher Chinese wages, and the growing productivity of U.S. workers make domestic manufacturing more attractive than it has been in years. Boston Consulting Group wrote last year:

Our analysis concludes that, within five years, the total cost of production for many products will be only about 10 to 15 percent less in Chinese coastal cities than in some parts of the U.S. where factories are likely to be built. Factor in shipping, inventory costs and other considerations, and -- for many goods destined for the North American market -- the cost gap between sourcing in China and manufacturing in the U.S. will be minimal. ... When all cost are taken into account, certain U.S. states, such as South Carolina, Alabama, and Tennessee, will turn out to be among the least expensive production sites in the industrialized world.

Put these two together, and I think there's a better-than-even chance that 10 years from now -- by then, two decades after Buffett penned his article in Fortune -- we'll have a new motto: "Goodbye, pain; hello, pleasure."