In last night's State of the Union address, President Obama laid out his vision for a vibrant America, one with jobs as bountiful as clean energy and a society that relies less on fearmongering and more on rational thinking. While creating jobs remains a top priority for the White House, there are plenty of hurdles that remain to garnering enough votes from both parties.

What if the political gridlock in Washington could end with both major parties emerging victorious while simultaneously reducing the deficit? What if the solution could also reduce the country's emissions in 2050 to levels last seen in 1984? It may sound too good to be true, but such a solution may not be as far-fetched as it sounds. According to the Congressional Budget Office, a national carbon tax of $20 per metric ton of carbon dioxide equivalent emissions that increases at a nominal rate of 5.8% per year would raise $1.25 trillion over a 10-year period. Revenue from such a tax could be used to offset cuts to individual income taxes or corporate taxes, extend social programs, be placed into a fund for renewable-energy projects, or a combination of these options and more.

Yes, it may sound counterintuitive, but a tax can ultimately lead to prosperity. And while the tax itself is simple, explaining the reasons for and distinguishing the misinformation about it are a bit more difficult. Take these words as an evolving blueprint for how an American carbon tax could combat climate change and reduce the deficit all the while protecting our core values -- and our planet -- for future generations.

If a carbon tax is so awesome, then why doesn't it exist?
It doesn't help that the phrase "carbon tax" contains the dreaded word "tax." I once had a history teacher who told me the first things politicians do after being elected to office is prepare for re-election. That may have some truth to it when you consider that the political landscape is dominated by career politicians on both sides of the aisle. An ominous focus on remaining in office forces politicians to steer clear of risky measures, which can stifle real societal progress from being made.

Today it seems that the winner of each election gets handed a shiny new can labeled "Urgent: America's Problems" that is then happily kicked down the road. In a politician's eyes, that can might as well read "Open Now for Political Suicide."

This problem was front and center with the latest round of debt-ceiling talks, which lately have come down to a game of tug-of-war, with the slider bar between taxes and social programs. Each side tries to maximize its chips -- and political future -- while simultaneously minimizing that of the opposition. Not surprisingly, little was accomplished.

That hasn't stopped several countries and individual states from employing emissions programs of their own. To be fair, a carbon tax is not the only way to regulate emissions. The European Union, Australia, South Africa, and others have varying degrees of carbon policies in place. So, too, do Quebec, California, and a host of New England states. According to National Journal, carbon trading markets from California, Australia, and Quebec may be linked in the not-too-distant future to "create a truly global market" generating "billions of dollars."

In fact, Australia's carbon policies and technological advancements have resulted in wind energy that is cheaper than coal. That is no small step for the world's fourth largest coal producer and should erase doubts for countries currently on the fence over carbon legislation.

A global carbon market will be the ultimate step toward staving off atmospheric-related climate change. This is a global problem that requires global solutions. Last year, America's new-found love for natural gas displaced coal and saw carbon emissions plummet to levels last seen in 1992. It is certainly good news, but it should be considered only part of a long-term solution for controlling emissions. The coal we neglected to burn within our borders stoked power plants elsewhere on the globe. Earth doesn't care where emissions enter the atmosphere.

A simpler way to connect emissions and climate change
I know there are those who say the climate change we're seeing is a natural cycle. While I fully expect plenty of discussion in the comments section below, I think one graph shows just how much of an impact humans have had on the atmosphere. Before we get to that, let's discuss a simpler way to account for emissions: a mass balance.

Most of the oil, gas, and coal we extract from Earth's crust today were once a collection of algae, plants, and animals that lived 300 million to 400 million years ago. It took 50 million years of heat and pressure to transform their organic remains into fossil fuels. The process has never been repeated in such amazing quantities since, thus making these fuels finite resources.

The amount of dinosaur sauce yet to be drilled or mined is immaterial; we humans have released millions of years of sequestered carbon back into the atmosphere in a span of less than two centuries. If that doesn't throw a big enough wrench into critics' arguments, consider the following graph of historical atmospheric carbon levels, as determined from ice cores:

Again, a little tough to argue with such an unnatural spike that perfectly corresponds to the Industrial Revolution. Emissions aren't debatable, so why should there be a disconnect between the atmosphere and a changing climate? You can read more on climate change from NASA's climate website.

A problem or an opportunity for stability?
You can view the nearly vertical rise in CO2 emissions as a big problem or a big opportunity. Some of the greatest entrepreneurs in history have stamped their name on history by doing the latter, and I can only imagine that the next batch has already been born. The government should certainly wake up to the possibilities.

A recent study (link opens a PDF) conducted by MIT found that a carbon tax could generate annual revenue of up to $111 billion in revenue by 2015, $182.5 billion by 2030, and $337.2 billion by 2050 (all in 2012 dollars). The study found that 10-year revenue for the tax could be in the neighborhood of $1.5 trillion -- higher than the figure being squabbled over during recent budget talks. To understand the significance of those figures, let's view where Uncle Sam's tax revenue came from in 2011: It may seem like a drop in the bucket at first, but consider that a carbon tax would be an entirely new revenue stream that could be enacted without making tough "one-or-the-other" decisions between tax increases and cuts to social programs. Inaction on those tough decisions has added plenty of uncertainty to our country's financial future for a very long time. And if there is anything Mr. Market and the government love above all else, it's stability.

Why you, the investor, want carbon certainty
The London-based Carbon Disclosure Project recently announced that "investors wielding $87 trillion in assets -- or a third of the world's invested capital -- have asked more than 5,000 public companies to disclose their carbon emissions and climate change strategies." Why? Investors and companies are beginning to see the relationship between the environment and the use of their capital and value of their assets.

Last month, fellow Fool Travis Hoium offered investors ways to safeguard their portfolios against climate change, while I detailed some of the best emission reduction projects from just four of the most admired blue-chip companies. These are projects that require the voluntary allocation of capital, mind you. Why act if government handouts -- or penalties -- aren't on the other end? Reducing consumption, emissions, and waste reduces capital costs and creates happier workplaces -- both of which are reflected in the bottom line.

Here are several major companies that could benefit from a carbon tax or trade program at $20 per metric ton of carbon:

A comprehensive carbon policy could free billions of dollars in capital from the world's biggest companies by adding certainty and stability to the markets.

Why you, the individual, want a carbon tax
What are the drawbacks of a carbon tax? According to John Reilly, the co-director of MIT's Joint Program on Science and Policy of Global Change, a carbon tax has "virtually no serious trade-offs." The program's study, which I referenced earlier, showed that "the overall economy improves, taxes are lower, and pollution emissions are reduced."

A 2011 study (link opens PDF) by the EPA stated that the three largest sectors for carbon emissions in 2007 were energy (6,291 million metric tons), agriculture (426 million metric tons), and industrial ($351 million metric tons). So will consumers have to foot the bill for a carbon tax? That's usually how corporations handle taxes. However, consider that even cheaper natural gas resulted in climbing electricity prices in the past several years as the costs of infrastructure upgrades were passed along to consumers: 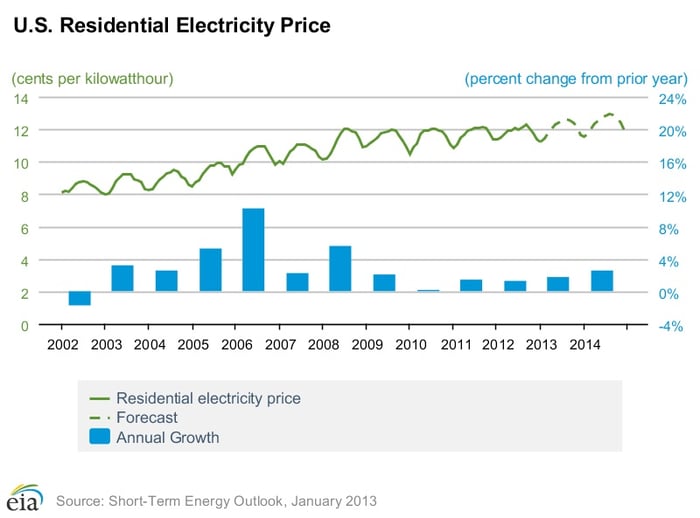 A carbon tax could offset this climb directly by establishing an Energy Security Trust, which the president mentioned last night, to protect consumers from price increases. Gradually, as the grid becomes greener and more efficient, taxing carbon could result in pricing benefits for consumers, which is something volatile natural gas cannot do.

The tax would also help reduce the unforeseen budget-bombs caused by the negative externalities of atmospheric pollution. As Marc Gunther, a contributing editor at Fortune magazine and a national leader on sustainability, told me:

Taxes are used to reduce things society wants less of. Humans currently treat the atmosphere as an unregulated garbage dump. We can pollute as much as we want without having to face any consequences, while taxpayers and governments foot the bill for public health and natural disasters.

In other words, we are already paying for carbon emissions. Until those accounts are labeled as such, we run the risk of never questioning why or demanding funding options other than our personal bank accounts. More frequent and more violent wildfires, hurricanes, snowstorms, and other forces of nature resulted in a national record 99 major disaster declarations in 2011. Rising sea levels are even forcing an island nation to move to higher ground. We cannot continue to be so ignorant to the effects of relentless carbon emissions or the economic opportunity they offer.

Foolish bottom line
Let's hope President Obama can make good on his promise last night to enact serious measures to curb the country's emissions, either through bipartisan collaboration or executive orders. The stage was certainly set for a national discussion on carbon legislation. To me, the efficiency of government is more important than its size. That includes a simpler tax code and less wasteful social programs that provide more bang for the buck. A carbon tax should be seen as a real part of the tax reform and budget deficit reduction discussions.

The revenue it generates could go to virtually anything. The important thing is that we bring it into the conversation.

Imagine just one possibility: A carbon tax is enacted that, by nature, frees politicians to sit down and raise tax revenue and/or take a hard look at wasteful social programs. Seeking just half of the originally sought debt-ceiling revenue from the latter two sources, or about $700 billion, and combining it with stewardship from the carbon tax could reduce our nation's deficit by nearly $2.2 trillion over a 10-year period.

The opportunity is too great to ignore.