Merck (NYSE:MRK) lost blockbuster asthma drug Singulair off the patent cliff last year, and the sales plunge quickly followed. With a mixed bag of pipeline projects, the company has to depend upon the existing strong sellers to maneuver through this first year sans Singulair. Leading that pharma pack is the type 2 diabetes treatment Januvia -- a DPP-4 inhibitor that brought in sales of over $4 billion last year.

Januvia continues to achieve double-digit growth, but a new danger lurks around the bend.

Januvia lowdown
Januvia hit the ground running following the 2006 Food and Drug Administration approval. The once-daily oral drug passed the $1 billion mark within two years and kept racing up. In 2012, Januvia accounted for 10% of Merck's pharmaceuticals segment -- matching only the dying Singulair. 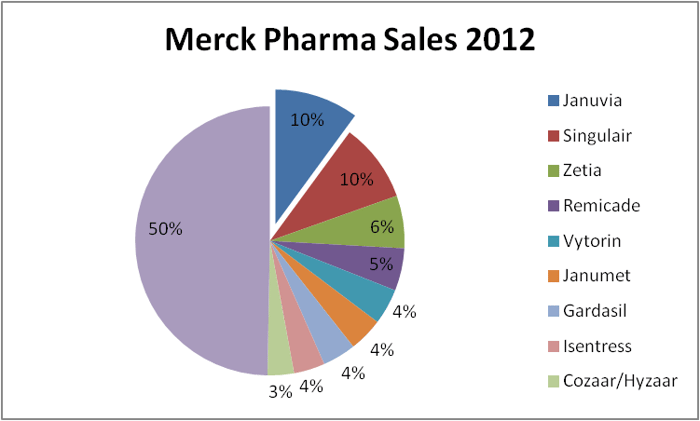 Diabetes is a growing market that's also quite populated. What makes Januvia stand out? The simple facts that it works and is generally well-tolerated in the majority of patients.

But Januvia isn't the only diabetes drug performing well for Merck.

Januvia's little buddy
Merck has expanded Januvia's potential with combination drugs. The greatest success thus far has been Janumet, which pairs Januvia with the popular diabetes medication metformin. Janumet appeals to a smaller group of patients with blood sugar levels not adequately maintained with Januvia alone.

Janumet's sales have been significantly lower than Januvia, but the sales growth has also been in the double digits. 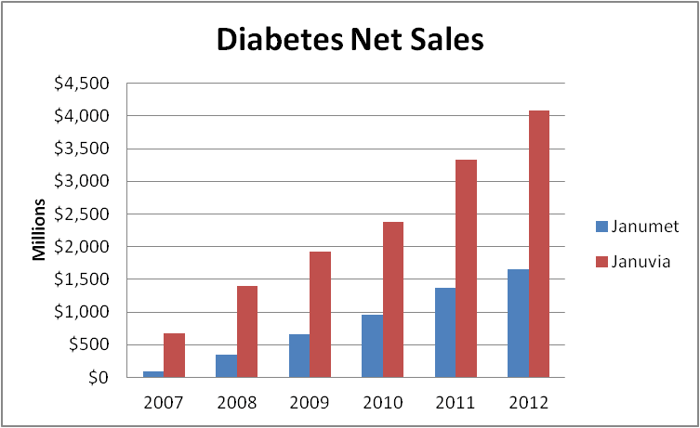 Merck would love to strike gold with another combination, but that could be some time. The company received approval in 2011 for Juvisync, which includes Merck's off-patent cholesterol drug Zocor. But Juvisync didn't amount to Janumet's potential. Another cholesterol effort included Pfizer's off-patent statin Lipitor, but the project was canceled  in late-stage trials with Merck citing business reasons.

Competition
Januvia has done a fantastic job holding back competing DPP-4 inhibitors. The diabetes partnership of Bristol-Myers Squibb (NYSE:BMY) and AstraZeneca (NASDAQ:AZN) have Onglyza and the combination form Kombiglyze. Those two drugs together brought in less than $500 million in 2011.

Merck might face cannibalization in the future if its own DPP-4 pipeline project makes it to market. The company reported positive phase 2b results last fall for the once-weekly DPP-4 inhibitor MK-3102, and the safety and efficacy nearly matched Januvia. Time will tell if MK-3102 has strong sales potential.

A more pressing concern is a potential competitor that could receive FDA approval next month.

Johnson and Johnson's (NYSE:JNJ) Invokana belongs to a rising new class of diabetes drugs called SGLT-2. Invokana proved more effective than Januvia  in early trials and would become the first-in-class. SGLT-2 drugs provide an advantage because they're insulin-independent, allowing the drugs to pair with insulin easier than other classes. This allows for treatment customization -- a huge issue in the diabetes market.

Invokana's has blockbuster earnings potential -- if it can make it to market. An FDA panel recommended approval, but a similar drug from Bristol-Myers was sent back to trials because of potential cancer risks.

Foolish final thoughts
Merck has a number of strong selling products left in the pharmaceutical portfolio. Normally, no one drug has a tremendous impact on the company's overall health. But Singulair's expiration has drawn attention to this segment and whether the strong sellers can help keep up revenues until some pipeline projects pay off.

Diabetes patients often have to adjust medications to find the best drug or combination. Januvia's sales prove it's working for many people. But the SGLT-2 class could become the new treatment standard in the future.