With an enterprise value approximately $14.5 billion, LINN Energy (OTC:LINEQ) – and by extension it's publicly traded sibling LinnCo (NASDAQ: LNCO) – is moving up the ranks as one of the leading independent oil and natural gas producers in the U.S. The companies pay an incredibly generous distribution of more than 7%, which is beginning to attract the attention of income-seeking investors. In order to sustain that distribution, LINN needs to have stable reserves that can continue producing for decades.

With those reserves being so important to the company we're going to look at them through the lens of the company's portfolio of production basins. By knowing more about what the company owns, we can gauge whether the company is something that's worth owning.

LINN has a large asset base comprised of about 5.1 trillion cubic feet equivalent of total proved reserves. For some perspective, we use about 24 trillion cubic feet of natural gas in the U.S. each year. The difference for LINN is that it's estimated that the company will produce from these reserves over an average of the next 21 years. While the company's reserves are substantial, it produces just a fraction of our energy needs each year.

LINN produces from about 15,000 wells, which yield a balance of 55% natural gas and 45% oil and natural gas liquids. These wells are spread across the company's six operating regions, each of which have a unique set of characteristics to consider. 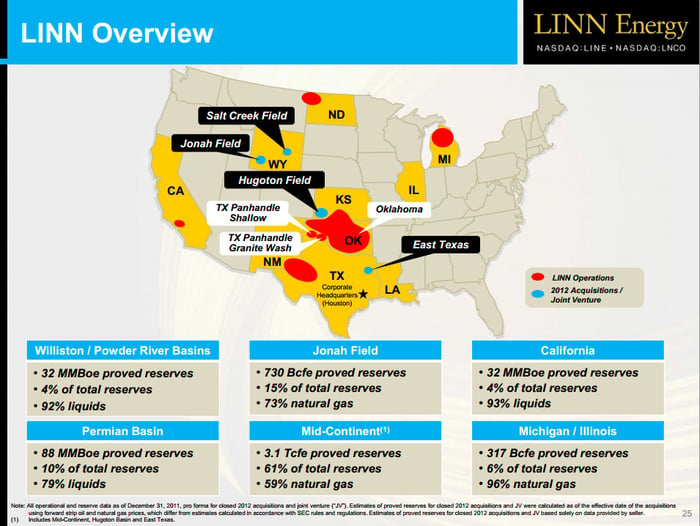 Let's take a quick look at each production region and how it fits into LINN's business model.

Midcontinent
At 61% of total reserves the midcontinent oil region holds the largest portion of LINN's total reserves and does most of its heavy lifting. The assets are primarily located in Oklahoma, Kansas, and parts of Texas, and hold 3.1 trillion cubic feet equivalent of proved reserves, of which 59% is natural gas. LINN also holds more than a thousand future drilling locations in the region which hold tremendous organic growth potential.

LINN has built up its position in the midcontinent through a string of acquisitions over the years. The company made its big splash back in 2007 when it acquired Dominion's (NYSE:D) operations in Oklahoma, Kansas, and the Texas panhandle for $2.05 billion. At the time Dominion was divesting its exploration and production assets to refocus its business into a pure play utility. Because of that repositioning LINN was able to acquire premier assets in a transformative deal which really took the company to another level.

More recently LINN closed a $1.2 billion deal with BP (NYSE:BP) to further strengthen its operations in the area. Those BP assets came with a low decline rate of about 7% and an estimated reserve life of 18 years. They also came with the underutilized Jayhawk processing plant which could benefit from gas production coming out of the region's Mississippi Lime. The takeaway for LINN investors is twofold, these core operations are ripe for continued consolidation while also holding upside from organic growth.

Jonah Field
LINN separates its Jonah Field in Wyoming, which it also acquired from BP last year, from the rest of its midcontinent assets. Production from Jonah is very heavily weighted toward natural gas; it's 73% natural gas. The decline rate here is still fairly low at 14%, though it is higher than a lot of LINN's other assets.

What's important to note about this field is that is comes with a lot of future upside. LINN estimates the field holds 1.2 trillion cubic feet equivalent of resource potential from drilling another 650 wells. That organic growth potential will be important as the company will need those reserves as its current production does deplete its reserves over time.

Permian Basin
LINN's position in the Permian comprises 10% of its total reserves, of which 79% are liquids. These more liquids-rich assets are important to LINN in an era of low natural gas prices. While the company is very well hedged, LINN's production growth through the drill bit is more profitable when targeting liquids. The company has an estimated 400 future drilling locations in the promising Wolfberry trend, which it can profitably drill until its more profitable to drill elsewhere.

Michigan/Illinois
Holding 6% of total reserves, the company's operations in Michigan and Illinois are primarily a natural gas asset with 96% of reserves being gas. Because of the company's hedging program these are still great assets for its structure, as they have an estimated reserve life of 24 years along with a low decline rate of just 6%. There's also upside here as the price of natural gas recovers.

California
Coming in at 4% of total reserves, LINN's California operations are very liquids-based at 93%. These are extremely long-life assets with an estimated reserve life of 38 years and a low decline rate of 3% per year. Few assets are more perfect for an MLP type investment like LINN than these California oil assets.

Williston/Powder River Basins
Last up are LINN's holding in the Williston and Powder River Basins which are unique in that they are more growth-type assets, which is why LINN packages them together. Together these make up the final 4% of the company's total reserves and are comprised of 92% liquids.

The Williston Basin assets are an investment in an average 7% non-operated working interest in wells drilled into the high-growth Bakken play. This is a unique asset for LINN; according to CEO Mark Ellis, the Bakken:

Provides LINN with a foothold position in a premier oil basin with vast resource potential. The non-operated nature of the deal allows us to accelerate our knowledge in the play from high-quality operators and reduces execution risk in the development of more than 400 highly economic drilling opportunities. Finally, the deal positions us in another oil basin with numerous mature producing assets providing LINN with the opportunity for further consolidation.

Meanwhile, the Powder River Basin entry came to LINN through its Salt Creek joint venture with Anadarko (NYSE:APC) last year. The 100% oil asset has an extremely long reserve life of 28 years and a low decline rate of 7%. The companies are using enhanced oil recovery (EOR) technology to increase production and the company expects this will enable the field to grow production for the next 10 years. This is an important joint venture for LINN as it can greatly benefit from Anadarko's extensive EOR experience and then potentially transfer this technology to its existing or acquired asset base.

The Foolish bottom line
For an MLP-type asset you want to see stable cash flow that has the potential to grow slowly over time. As we peer across LINN's portfolio we see just that – the company can continue to produce from its current asset base for an average of 21 years. As it does, it will return a vast majority of that cash flow back to investors. What it doesn't return it will reinvest to drill thousands of wells across its inventory of low-risk and liquids-rich opportunity. Along the way, expect the company to continue to use a balance of debt and equity to add additional assets into the mix, extending its reserve life and growing its stable of cash-producing assets. LINN has a great asset base which is perfect for its MLP-like structure, and one that should enable the company to keep producing a steady and growing distribution for years to come.