This has been a long time coming for NVIDIA (NASDAQ:NVDA): "Grey" is here. The graphics specialist turned mobile powerhouse has just announced its Tegra processor with an integrated LTE baseband, which promises to intensify its competition with dominant rival Qualcomm (NASDAQ:QCOM).

The news comes just over a month after NVIDIA unveiled its next-generation Tegra 4 processor, previously known as "Wayne." The new Tegra 4i with the integrated cellular connectivity has been known as "Grey" and is a major milestone in the company's mobile ambitions.

Make no mistake: this is a big deal.

The Tegra 4i uses a similar architecture to both the Tegra 4 and previous generation Tegra 3 in that there will be four primary processing cores with a fifth "companion core" for low-power tasks. However, there is a big difference in the specific cores doing the heavy lifting in each chipset. 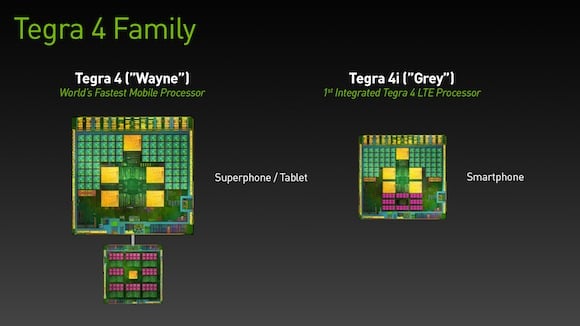 That statement also has negative implications for Broadcom (NASDAQ: BRCM), which just launched a discrete LTE modem that has a chance of grabbing the Apple win from Qualcomm. Broadcom's chip is smaller than rival offerings, which the company hopes will differentiate it from the rest. As far as Apple is concerned, a smaller die size appeals more than integrated cellular connectivity right now, since the iPhone maker uses its own A-X processors.

At the same time, Huang expressed confidence in the company's tablet prospects, with the "vast majority" of NVIDIA's growth coming from that form factor. NVIDIA has had more design wins in tablets than Qualcomm, including high-profile wins in the Google Nexus 7 and Microsoft Surface RT.

We've only just begun
Launching an applications processor with an integrated baseband will give NVIDIA more ammo in its battle with Qualcomm. Intel has also been trying to land design wins in mobile devices, but has negligible traction thus far. However, Intel won't achieve this level of cellular integration with its mobile processors until 2014.

NVIDIA is hoping to see Tegra 4i devices start shipping by year's end, although the majority of gadgets probably won't appear until early 2014. That will also be somewhat of a challenge considering the core being used in the chip. By 2014, the market will mostly be transitioned to more powerful processors so the Cortex-A9 r4 might not look as competitive in a year, especially compared to the regular Tegra 4.

Up until recently, Qualcomm has had a firm grip on both the discrete LTE baseband and integrated LTE baseband markets. Both segments will come under fire from Broadcom and NVIDIA, respectively. This competition is only now really just beginning.