Heading into the Consumer Electronics Show in Vegas, which officially begins tomorrow, NVIDIA (NASDAQ:NVDA) has unveiled a pair of new offerings to start off 2013. Let's dig in to see what the announcements mean for investors.

NVIDIA is introducing the latest version of its popular Tegra mobile processor. The Tegra 4 follows in the footsteps of the Tegra 3 and NVIDIA is calling it the "world's fastest mobile processor." The Tegra 4 previously carried the code name "Wayne," a reference to Batman, while the previous generation Tegra 3 was known as "Kal-El" in a nod to the Dark Knight's ally from Krypton.

The new processor has a similar architecture to the Tegra 3: four cores along with a fifth low-power companion core. However, this time we're talking about ARM Holdings' (NASDAQ:ARMH) latest Cortex-A15 cores as opposed to the Cortex-A9 cores found in the Tegra 3. NVIDIA says this is the first quad-core implementation of Cortex-A15 cores. Samsung's new Exynos 5 chips that launched last year in devices like Google's (NASDAQ:GOOGL) Chromebook were dual-core applications of Cortex-A15 cores.

Tegra 4 can also serve up 4G LTE voice and data connectivity, but these functions aren't integrated directly into the chipset. Instead, LTE is facilitated by NVIDIA's Icera i500 discrete baseband processor. That means that NVIDIA is still lagging in the connectivity department relative to Qualcomm (NASDAQ:QCOM), which remains the only mobile-chip maker offering integrated LTE. 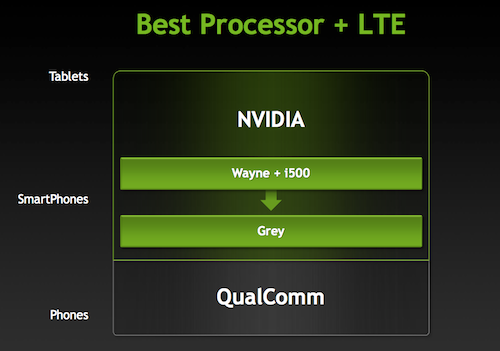 NVIDIA will integrate LTE into its "Grey" (for X-Men's Jean Grey) Tegra chip later this year, which could be an inflection point in its competition with Qualcomm. Until then, Qualcomm will likely keep its advantage in smartphones, but NVIDIA may also retain its tablet lead thanks to its graphics specialties.

NVIDIA reported the second consecutive quarter of record Tegra revenue in November, contributing to a record overall top-line last quarter. Tegra was also 16% of total revenue, showing how important the business is to NVIDIA's mobile future.

The best defense is a good portable gaming device
NVIDIA caught investors off guard with the announcement that it's getting into the portable gaming market with Project Shield. Naturally, the handheld device is also powered by a Tegra 4. It features a controller, 5-inch multitouch display, and integrated speakers. Project Shield is powered by Google Android, although it can also stream games from a Microsoft (NASDAQ:MSFT) Windows PC over Wi-Fi. Streaming from a PC requires one of NVIDIA's newest Kepler GPUs.

NVIDIA didn't announce specific pricing or availability, but said the device would launch in the second quarter at a "price competitive with other mobile gaming systems and tablets." That means it should retail in the ballpark of $200 to $300.

On one hand, Project Shield can potentially gain immediate traction since it plays existing Android and Windows gaming titles, piggybacking on both of those enormous platforms. On the other hand, stand-alone single-function portable gaming devices are on a broad decline, disrupted by multifunction devices like Google's Nexus 7 or Apple's (NASDAQ:AAPL) iPod Touch and iPad Mini.

For example, Sony (NYSE:SNE) lowered its portable device unit forecasts (which include both the PlayStation Portable and PlayStation Vita) several times last year. Last Spring, Sony was expecting to sell 16 million units through this coming March. That figure was brought down to 12 million in August and then further reduced to 10 million in November.

This is a low-volume and shrinking sector that NVIDIA is getting into, especially compared to the large-volume and booming smartphone and tablet markets that NVIDIA is making progress in with Tegra. Investors shouldn't expect much upside from Project Shield, and its only saving grace will be if NVIDIA isn't spending a lot of research and development dollars on the initiative.