Apple (NASDAQ:AAPL), the former golden child that could do no wrong, now can't seem to get anything right. After peaking at $705 back in September, the company lost its way with the Maps fiasco, followed that up with reports of lackluster sales at the iPhone 5 launch, saw those that were sold arrive pre-damaged, disappointed with the pricing on the iPad Mini, offered up a big earnings miss, gave gloomy guidance for the coming holiday season -- and we hadn't even gotten out of October yet!

Today Apple's stock trades at $446, a loss of more than one-third of its value, and all the suppliers that had been riding its gravy train with biscuit wheels went off the rails with it. TriQuint Semiconductor (NASDAQ:TQNT) is down 38% since September, Skyworks Solutions (NASDAQ:SWKS) is 33% lower, and Cirrus Logic (NASDAQ:CRUS), feeling the pain most acutely than most, has tumbled more than 45%. 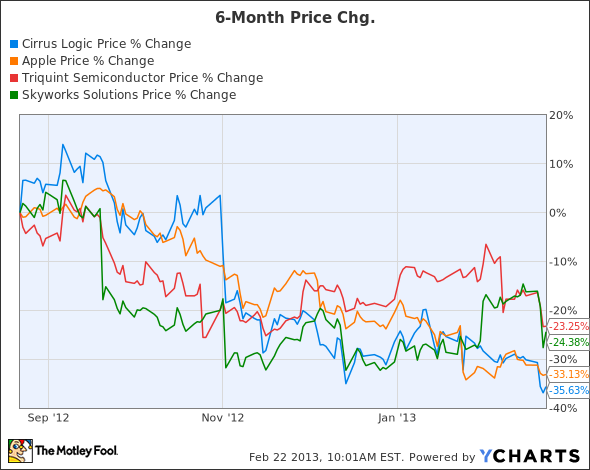 That could be because more so than most other suppliers, Cirrus lives and dies by Apple, selling almost all the integrated circuits it makes to the iPhone and iPad maker. It counted on Apple for 91% of its revenue in its fiscal third quarter! In comparison, TriQuint counts on Apple for just under a third of its revenue (Foxconn, the builder of many of Apple's products, represented 31% of its sales in the latest quarter). Skyworks was similarly situated with 29% of its revenue coming from Foxconn.

With Apple seeing demand for its iPhone 5 weaken, it naturally cut back on orders for them and the components that go with them. And its suppliers are falling as the markets tremble at what that portends.

But the Fool's senior tech analyst Eric Bleeker thinks investors are missing an important driver for Cirrus's future growth and valuation. He points out the iPhone 5 has more of its ICs in it than the 4S does, but both phones were the top-selling smartphones on the market, beating out the heralded Samsung Galaxy series. So when the next iteration of the iPhone rolls around, Cirrus Logic will most likely not have lost any positioning in the hardware and may just see even more placement inside.

Famed value investor John Neff once noted investors are great at drawing straight lines out to infinity. When a stock is rising, they extrapolate that growth as they imagine the good times continuing forever. Similarly, when a stock is falling, they tend to picture it falling to zero. Neither scenario is correct, and when it comes to Apple, I feel pretty confident saying the stock ain't going to zero!

This is simply momentum looking in the rearview mirror and giving Apple critics their day in the sun. Sure, they've been given plenty of ammo by Apple to launch a fusillade against it, but that doesn't mean the iPhone 6 (or is that the 5S?) when it's finally unveiled won't wow the fanboys and reinvigorate Apple's mojo as iterations gone by have done.

The burned hand learns best
Apple may have already learned its lesson from the iPad Mini mispricing brouhaha, as analysts seem fairly confident we'll see the next iPhone offered at a much lower price to woo smartphone users back. I don't think we'll watch Apple follow Nokia down the path of offering cut-rate phones to stem customer losses, but we'll likely see some sort of discount, which is all well and good for Cirrus Logic. Because its fortunes are so intimately entwined in those of Apple, upon the latter's resurrection, we'll see the chip maker rise spectacularly again, too.

Yet it also leads one to wonder why, if Apple is essentially buying up every last bit of product Cirrus Logic is churning out, it doesn't just buy the company outright? It has almost $40 billion in cash and equivalents (excluding long-term investments) sitting in the bank and the chip maker's market cap is just over $1.6 billion. It could offer investors a pretty premium and not even break a sweat. In the end, either scenario works out well for investors.

Cirrus Logic is not a broken company, and that represents opportunity for investors.