You're reading this article because it promises an analysis of how demographic changes will affect the economy. Most of you probably think I'm about to talk about aging baby boomers shifting into retirement.

But I won't. There's another demographic trend that could have a big impact on the economy. So much attention has been given to the aging boomers that this separate shift has gone mostly unnoticed, though it may be more important over the coming decade. 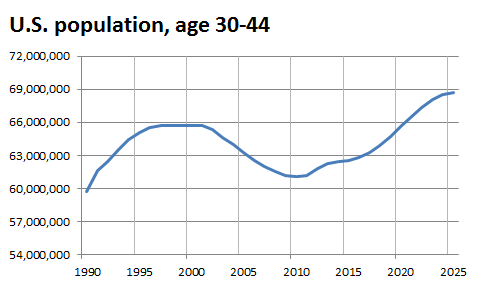 None of this is a surprise. After the baby boom ended in the 1960s, the birth rate plunged. The baby boom peaked in 1957, when 4.3 million babies were born. By 1976, that number was down to 3.1 million. The sharp drop-off in births between the 1960s and the 1970s meant that the population of Americans aged 30 to 44 would decline in the early 2000s -- which is exactly what happened. But the birth rate tipped back up in the late 1970s and 1980s. By the 1980s, Americans were back to having close to 4 million babies per year. That cohort is now approaching its 30s, so the population of Americans aged 30 to 44 is about to begin rising again.

That's important for economic growth, because we know a few things about Americans aged 30 to 44.

For one, they start a lot of businesses. According to the Kaufman Foundation, the median age of a company founder when beginning his or her current business is 40. This should make sense -- old enough to be experienced; young enough to be ambitious. And it bodes well for jobs growth. Despite what you might hear, most jobs growth doesn't come from small businesses, per se. Instead, new businesses are the key driver to new jobs. A separate study by the Kaufman Foundation found that from 1980 to 2005, "nearly all net job creation in the United States occurred in firms less than five years old."

The group of 30- to 44-year-olds also buys a lot of homes. The median age of a homebuyer is 39, according to the National Association of Realtors. The median age of a first-time buyer -- the group expanding homeownership rather than merely shuffling it around -- is 30. This will create more natural demand for housing over the next decade than there was in the last one. Still trying to recover from the housing bust, new-home construction is already far below average. It will need to rebound sharply just to keep up with normal population growth. Add in this demographic tailwind, and it could be a remarkable decade for the housing industry.

The group also buys a lot of cars. A decade ago, 28% of new-car purchases were by those aged 35 to 44 -- the highest of any age group, and more than the cohort's 22% share of the overall population. The recession pushed the average age of a new car buyer from 48 in 2007 to 51, according to industry analysis group Polk. But the 30-to-44 cohort may take the reins again, because their average income has rebounded from the recession faster than any other group in the working-age population. Factor in used-car sales, and those aged 35 to 44 on average spend more for vehicles than any other age group. Investors bullish on the U.S. auto industry tend to cite an aging fleet of vehicles that needs to be replaced. But there's another boost many are ignoring: growing ranks of prime-age car buyers.

Go down the Census Bureau's list of spending by age group, and our rising cohort leads in several categories. Per person, they spend the most on food. The most on housing services. The most on furniture, apparel, footwear, and entertainment. In many ways they are the driver of U.S. economic growth. And they're about to begin growing again for the first time in a decade.

The aging of the baby boomers and the strain it will place on entitlements will probably be the biggest demographic story of the next several decades, particularly after about 2030. But demographics might actually work in our favor over the coming decade, especially compared with the last decade. Be thankful.