Cleaning up trillion-dollar balance sheets is no small task.

The process is a lot like the initial struggle when deciding to eat healthier, count calories, and sweat tirelessly in the gym after years of gluttonous behavior. And over the last two years, as the Federal Reserve conducted stress tests and capital reviews of the major U.S. bank-holding companies, Bank of America (NYSE:BAC) has continuously been the overweight guy who just couldn't seem to find his way to the treadmill.

After its dividend-increase proposal was rejected in late 2010, the bank didn't even ask for the Fed's permission to raise its dividend or initiate share buybacks in 2011. Meanwhile, rival Wells Fargo (NYSE:WFC) almost doubled its quarterly dividend. When the Federal Reserve releases this year's stress test and Comprehensive Capital Analysis Review (or CCAR) results on March 7 and 14, respectively, all eyes will be on Bank of America as it steps on the scale.

Not his first scrum...
When Brian Moynihan took over as CEO on Jan. 1, 2010, shareholders knew what they got: A crafty lawyer and a man with a vision for a simpler bank. Furthermore, they got an ex-rugby player who was going to put up a fight. And fight he has. Since the 2011 CCAR results were released in March 2012, Moynihan and his management team have ushered B of A's balance sheet into the gym and are helping it flex its capital muscles. 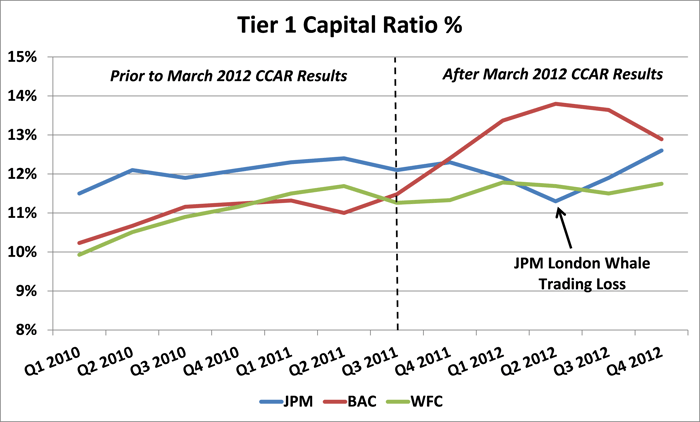 The tier 1 capital ratio equation is equity divided by total risk-weighted assets. Bank of America is driving the change in its ratio by reducing the denominator, rather than drastically increasing the numerator. However, going forward, there will be increased pressure to drive top-line revenue, and thus, the equity piece of the equation. 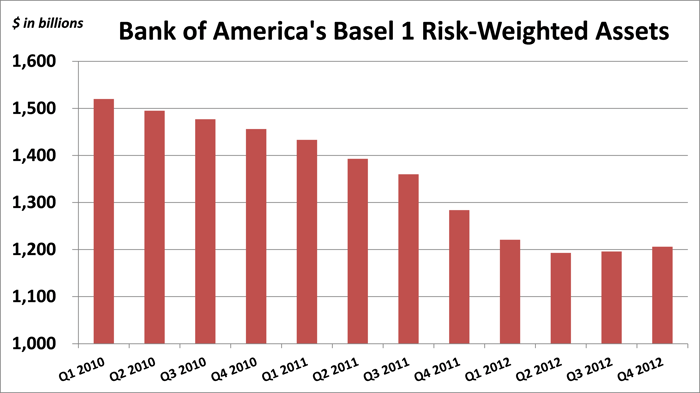 Better but still recovering
While media pundits and disgruntled shareholders love to poke and prod at Moynihan's lack of charisma and eloquence, few can deny the progress that he has made in cleaning up the company's distressed legacy assets and navigating the legal minefield. There are still legal challenges ahead, as fellow Fool John Maxfield points out, so despite the vastly improved capital structure, B of A is still not a lock to increase its measly $0.01 quarterly dividend.

Since Moynihan snagged the top spot at B of A, the challenging, low-rate environment and depressed consumer spending have made banking a much thinner-margin business. Despite the environment, Moynihan has solidified the bank's capital structure and positioned the business to thrive in a steeper yield curve environment. Long-term investors should not be spooked if a dividend raise does not follow the CCAR release because Moynihan and his management team understand the importance of patience and the potential for sustainable future dividends if the capital structure is strong and respected.