Stocks won't get much help from today's fourth-quarter GDP revision: The S&P 500 (SNPINDEX:^GSPC) and the narrower, price-weighted Dow Jones Industrial Average (DJINDICES:^DJI) are up just 0.25% and 0.11%, respectively, as of 10 a.m. EST.

Growth, sort of
Well, at least it wasn't a contraction. Last month, when the Commerce Department released its initial estimate for fourth-quarter GDP, analysts and pundits were shocked to learn that the economy might have shrunk (the data showed a 0.1% contraction). This was quickly followed by all manner of rationalizations and predictions that the figure would later be revised upward significantly. Well, the first revision came in this morning, and it does posit growth in the fourth quarter -- rather underwhelming growth of 0.1%, which is essentially indistinguishable from the prior figure.

Today's revision puts GDP growth for 2012 at just more than 2%. The U.S. economy is performing better than many of its advanced-economy counterparts, but it's hardly firing on all cylinders. Nearly four and a half years after the collapse of Lehman Brothers, there is plenty of slack left in this economy.

In that regard, it sometimes appears that we're stuck in a kind of "Groundhog Day" scenario, where fits of optimism and a run of positive indicators perpetually alternate with bad numbers and investor worries. The following graph shows the performance of the S&P 500 for 2011 (red line), 2012 (blue line) and 2013 (year to date, green line). All have been rebased to a starting value of 100. 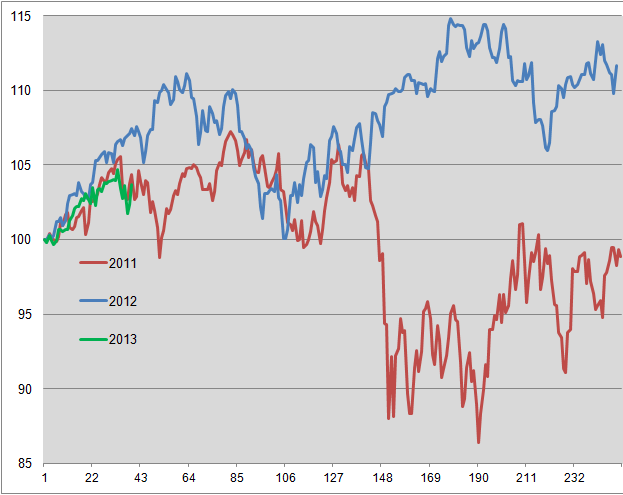 Stocks' beginning-of-year performance has been very similar in each of the last three years, with a solid rally followed (in 2011 and 2012) by a sharp correction. I don't want to overstate the comparison, but it's worth noting that the end-of-year performance diverged significantly. Which way will we go in 2013?