In that spirit, we three Fools have banded together to find the market's best and worst stocks, which we'll rate on The Motley Fool's CAPS system as outperformers or underperformers. We'll be accountable for every pick based on the sum of our knowledge and the balance of our decisions. Today, we'll be discussing J.C. Penney (NYSE:JCP), one of the oldest and most well-known apparel retailers in the U.S.

J.C. Penney by the numbers

Here's a quick snapshot of the company's most important numbers:

Source: Yahoo! Finance, Morningstar. TTM = trailing 12 months. N/A = Earnings are expected to be negative over the next 12 months.

Sean's take
I don't have a word to describe just how horrific J.C. Penney's fourth-quarter results were. It obliterated every imaginable barrier for how bad a company could perform on a year-over-year basis. Total revenue plunged 28.4%, same-store sales fell 31.7%, and direct-to-consumer sales caved 34.4%. Cumulatively for the entire year, Penney's reported a loss of $985 million. These results have left Penney's and investors at a crossroads. We know something needs to be done (and quickly), but the question is whether or not management has all the right answers now.

Looking at this from the bulls' perspective, Penney's is now as cheap as it's been relative to sales and book value since the height of the recession. Penney's is a well-known department store that's one of the anchor brands often found in malls. In addition, it doesn't have a novice at the helm. CEO Ron Johnson has a history of success under his belt, having led Target (NYSE:TGT) to success in the mid-1990s after he altered the company's strategy to go after designer brands. Johnson understood early that consumers crave designer brands and moved Target back into relevance. His greatest victory came with the opening of Apple's first retail store in 2001; I think we all know how well that turned out.

However, investors couldn't care less about Johnson's past successes because his current plans have failed to produce anywhere near the desired results. Johnson attempted to remove sales from Penney's stores and instead introduced a low everyday pricing strategy. The plan backfired after roughly a year with comparable-store sales nose-diving. Kohl's saw a blistering January same-store sales rise of 13.3% and Macy's solid fourth-quarter results showed it grew same-store sales 3.9% (and 11.7% in January). It doesn't take a rocket scientist to figure out where these sales are coming from... J.C. Penney! Johnson has since backpedaled on his pricing stance, but I feel it could be too little, too late.

The biggest problem current facing Penney's is that Johnson has tried to dictate consumer habits from the get-go. He did it at Target and Apple, and it worked. However, without his mini-shop platform in place before he changed the pricing strategy, he alienated many of Penney's most loyal cost-conscious customers. Will those customers come back? Perhaps, if the price is right...

The pending litigation in New York between Macy's and Penney's over the right to sell Martha Stewart Living Omnimedia products does have some bearing, as the brand would be a major traffic driver into its stores. While a win here would not be single-handedly capable of saving Penney's, it could be the impetus that drives alienated consumers back.

All told, I'm pretty convinced that Penney's management team is a deer in the headlights. They seem completely lost as to what to do next, and I'm not sure the damage of its pricing practices can be reversed quick enough to stave off the inevitable. One thing I know for certain is that Penney's can't deal with another nearly $1 billion annual loss, so I'm recommending a call of underperform on the company.

Alex's take
What else can I say about J.C. Penney's abysmal performance that Sean hasn't said already? Not much. What I can do is compare its performance to its peers with a few graphs: 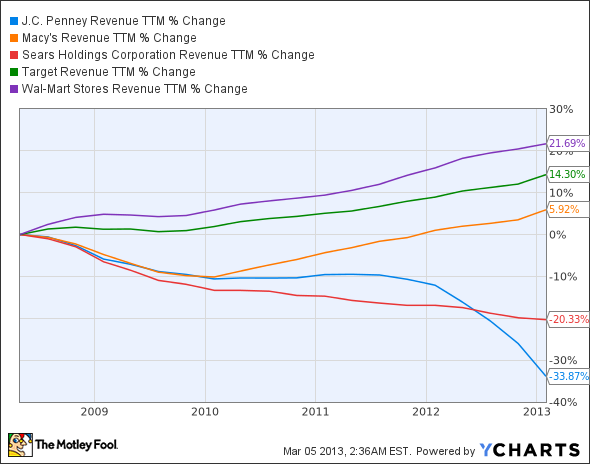 Sears' persistent weakness is well known and widely mocked, but Penney's is worse. Shoppers are abandoning Penney (and Sears) in droves. Its consumer perception, according to YouGov's BrandIndex, actually held up better than Sears' did over the last holiday shopping season -- but that was only good for eighth place out of 10 retailers. Target scored nearly twice as well on a ranking of retail values as Penney. Penney actually scored better than Macy's on a BrandIndex "recommend" scale focusing on female shoppers around the same time frame, which indicates that Penney's problems may actually be worse than they appear. It doesn't much matter if women say they'll recommend a store if: 1) they don't actually recommend it, and 2) no one actually listens to these recommendations anyway.

When customers don't come, it tends to be harder to keep a retailer in the black. Obvious conclusion, right? Well, Penney's losses have increased at more than double the rate of its sales declines: 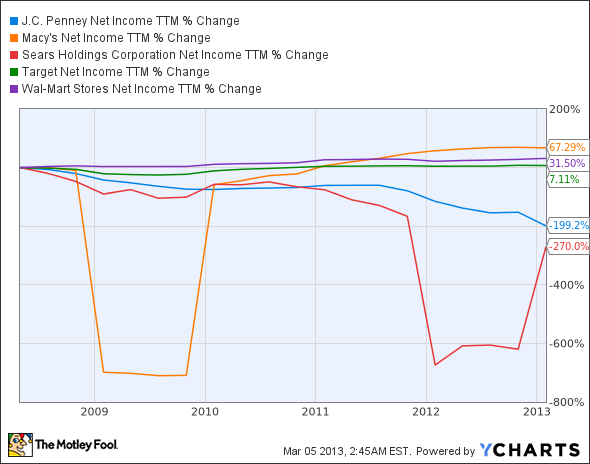 That's not just a result of accounting (at least not in Penney's case). No retailer has suffered a steeper decline in free cash flow over the past five years: 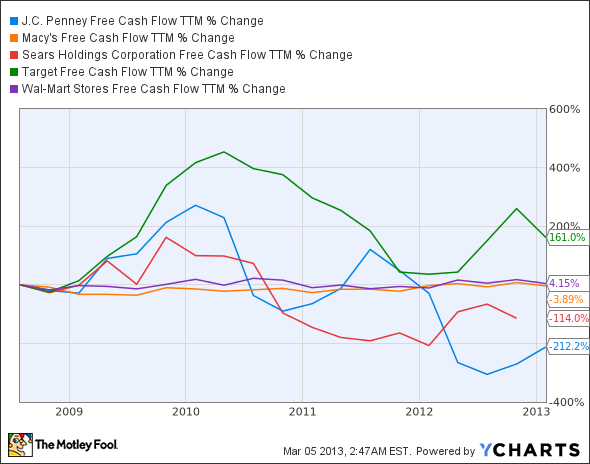 Sears might be a brand in slow decline. J.C. Penney is in free fall. Find me an example of a down-on-its-luck retail chain of Penney's scope that managed a successful turnaround after consumer perception turned against it and I'll show you 10 more that never recovered.

The plight of J.C. Penney in a world where Target is ascendant reminds me of a classic exchange from The Simpsons:

Marge: Well, I guess Macy's and Gimbels learned to live side by side.
Agnes: Gimbels is gone, Marge, long gone. You're Gimbels.

Gimbels was the largest department store company in the world at one point, but consumer perceptions changed. Ask Sears how that works. Even after merging with Kmart, Sears posted a real net revenue decline from the time it ended its catalog operation in 1993 to 2013. Now, go ask your female friends, neighbors, and relatives if any of them are planning to go shop at J.C. Penney anytime soon. I'd be surprised if you found any affirmative answers.

Travis' take
I'll admit that I've never understood the general idea of the department store. Why do I need to walk by the makeup counter to get to menswear? Why are there dishes in the same store as lingerie? I just don't understand why I would want to shop for random items in the same store when they all have their own dedicated store a few steps away in the actual mall.

To me, this debate comes down to two things: Is the department store dead? and Can J.C. Penney survive?

To the first question, I don't think we need all of the department stores currently in existence, so some are going to fail. There's simply too much competition from online retailers, and big brands have chosen to build their own stores instead of attaching their reputation to someone like J.C. Penney. The department store is slowly being relegated to antique status by most shoppers.

With my bearish view of the department store in mind, I see Sears being in worse shape long term because it doesn't even seem like it cares anymore. At least J.C. Penney is trying to be hip and cool with nice styles and a brand that a designer spent more than 20 minutes contemplating. But there's no reason both Sears and J.C. Penney can't fail miserably in staying relevant to the modern consumer.

My concern with an underperform call is: With a $3.7 billion market cap, there's only significant upside on the call if the company fails. There's a ton of risk if Ron Johnson is able to pull a rabbit from his hat and even marginally improve financial results. With that said, I'm in for an underperform call, but I'd like to keep this on a short leash and be willing to take a profit even at a 15% gain.

The final call
It's quite rare for all three of us to come to the same conclusion, but chalk us up for a unanimous underperform CAPScall on J.C. Penney. Penney's management team appears clueless, its comps relative to its peers' are a joke, and the longevity of the business model is even in question. It will take nothing short of a miracle to bring the consumer back to Penney's.

Currently, our TMFYoungGuns tracking portfolio is outperforming the broad-based S&P 500 by 350 points, good enough for an average gain of 14% per pick. If you'd like to see more of our selections, please visit the TMFYoungGuns portfolio page.