To be clear, tomorrow's stress tests are not the much-awaited Comprehensive Capital Analysis and Review (CCAR). Some confusion on that point is understandable -- the CCAR is also referred to generically as "bank stress tests." Also, both the CCAR and the Dodd-Frank stress tests are run by the Federal Reserve. And the testing criteria are very similar across both tests as well.

However, a key difference is the fact that it's with the CCAR that the Fed approves or gives a thumbs-down on tested banks' capital plans. So investors wondering whether Regions might be raising its dividend or buying back stock will have to wait another week until the CCAR comes out.

That said, the Dodd-Frank tests will give investors some insight into what the CCAR is going to reveal next week, so there's very good reason to tune in.

In Regions' case, there doesn't appear to be a whole lot to worry about in the Dodd-Frank test results. When compared to last year, Regions is on steadier footing. 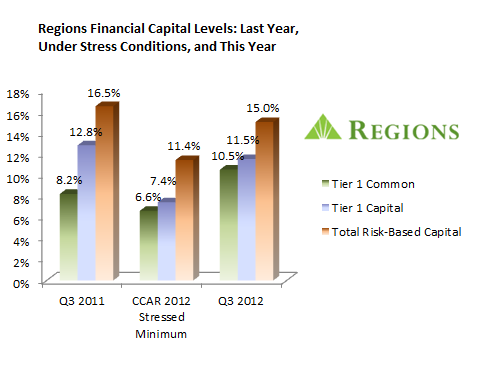 Notable here is the fact that year over year, Regions' tier 1 common ratio -- arguably the most important of a bank's capital measures -- is up markedly. The bank's stressed capital ratios were also above average during last year's CCAR tests. Given the pummeling that Regions took during the financial crisis, it may seem surprising to see its CCAR results above the likes of US Bancorp (NYSE:USB) and Wells Fargo (NYSE:WFC) -- two banks that are seen as very conservative lenders and that performed quite well through the crisis. But the comparison is hardly fair. While the capital plans of both Wells and USB included hefty dividend increases and share buybacks, Regions' included a big share sale so that it could repurchase the government's TARP preferred stock (yeah, that TARP).

But, hey, that was then. Fast-forward to today and Regions has paid down TARP -- all $3.5 billion of it -- and can still boast strong capital ratios.

Because these are ratios based on risk-based assets, it helps this time around that Regions' total assets are down 6% year over year (based on Q3 2012). But the mix of assets also makes a difference because Regions was among the banks that the Fed expected would see higher-than-average loan losses based on last year's CCAR scenario. Some of Regions' riskier loan exposures have fallen since the last round of stress tests -- loans to real estate developers and home equity loans both declined. At the same time, impaired loans at Regions have dropped.

Add this all up, and I don't think there's much for Regions investors to worry about when the Dodd-Frank stress test results come out tomorrow.