Over the past decade, Class I railroad CSX (NASDAQ:CSX) has decreased its operating ratio from 88% in 2003 to 71% in 2012. Railroad investors care about this measure of efficiency because a lower ratio leads to higher earnings before interest and taxes, or EBIT, which results in a healthier bottom line, all else remaining constant. And railroad operators dream of this type of a turnaround, from a laggard to one of the leaders in the industry.

The flip side of CSX's operating ratio is an EBIT margin that's ballooned from 11.6% to nearly 29% in less than ten years. Not surprisingly, the stock performance has closely mirrored CSX's earnings growth. As net margins grew from 3.2% in 2003 to 15.8% recently, CSX's stock proceeded to wallop the market, returning 420% versus the S&P 500's 82% return.

Of course, the industry as a whole is currently confronted with some unnerving secular trends, specifically rock-bottom natural gas prices leading to declines in coal traffic. Will these two commodities thwart CSX's plan to decrease its operating ratio and ultimately lead to lower profits for shareholders? To answer that, we've compiled a premium research report with in-depth analysis on CSX's future prospects. Today, you can get a sneak peek into this report and see just how CSX can deliver consistent growth despite strong headwinds in the all-important domestic coal markets:

Over the past few decades, major American railroad companies have experienced what industry insiders refer to as a "rail renaissance." Driven by heavy consolidation, operational improvements, and massive investment in new infrastructure, America's Class 1 railroads became leaner, more resilient carriers that are the envy of the rest of the world.

Recognizing the opportunity in 2009, Warren Buffett endorsed the railroad industry by acquiring West Coast carrier Burlington Northern Santa Fe in its entirety for $44 billion. At the time, he noted, "It's an all-in wager on the economic future of the United States ... I love these bets."

Suddenly, this slow-but-steady sector was attracting a great deal of attention in the investing world. CSX, now the second-largest publicly traded railroad, was no exception. Since 1960, CSX has consolidated a huge network of rails that reaches from Florida to New England and expands west to the Mississippi River. The map below shows the density of CSX's rail lines in the middle of the network, which revolves around the coal-rich Appalachian mountain range. 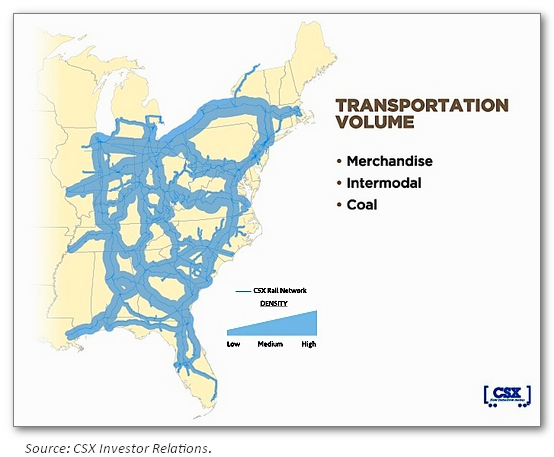 Access to such a resource-rich area of the country has always been a boon for CSX. Utility plants in the eastern U.S. historically relied on coal for power generation, and railroads provide the most economical means of transporting this heavy commodity. In fact, more than 70% of the coal delivered to coal-fueled power plants is delivered by rail. For CSX, coal traffic amounted to 32% of overall revenue and 24% of volume as recently as 2011. During 2012, however, the tide turned quickly in the coal market. Coal volumes declined by 16% during 2012, amounting to only 27% of CSX's revenue and 20% of overall volume.

Why the sudden downturn? In the U.S., three specific factors limited the use of coal by utility companies in 2012: warm winter weather, near record-low natural gas prices, and newly proposed Environmental Protection Agency regulations that restrict carbon dioxide emissions from coal-generated power plants. As a result, demand for a key component of the railroads' success story deteriorated during 2012.

For investors, the domestic coal situation is critical, but railroads have grown more nimble over the years and CSX shows signs of strength in other markets. The resurgence of the auto sector, for example, has partially offset the decline in coal transports. In addition, CSX's operating efficiency has remained relatively intact. The company took steps early on in 2012 to cut costs by furloughing workers and placing locomotives in storage. Finally, export markets remain a saving grace for future coal traffic. Only four years ago, China was a net exporter of coal, but it has since emerged as a massive consumer of this commodity, importing an estimated 254 million metric tons of coal in 2012 alone. By providing critical connections to eastern and Gulf Coast ports, CSX is well positioned to capitalize on the coming export boom that will propel the U.S. economy for years to come.