Berkshire remains one of Wall Street's favorites, and for good reason, but its insurance operations are not the only positive aspect of the company. With its varied subsidiaries, Berkshire presents ample opportunities for investors interested in financials, manufacturing, media, transportation, and other business segments. While Berkshire is a multifaceted company (to say the least), at its core is a huge insurance operation, with GEICO as its largest consumer-facing component.

Since Berkshire is a perennial investor favorite, why not compare it to Wall Street's latest hedge fund darling, AIG (NYSE:AIG)? One of the nation's largest insurers, AIG is back in the investment spotlight (the good kind) after years of being shunned. By comparing the two companies in five categories, we'll be able to see which one is a better insurance investment.

1. Breadth of services: AIG
AIG wins this round based on its expansive products that range from basic property and casualty coverage to life and retirement policies. While Berkshire has exposure to all of the same types of products, its insurance operations mainly focus on life and retirement services through reinsurance, which is where Berkshire provides support to the main insurance companies offering the products to clients. AIG does not provide reinsurance to other companies, but focuses on consumer-facing products.

2. Premiums growth: Berkshire
The Gecko is doing his job, as Berkshire totally kicked AIG's butt in 2012. With an 8.6% improvement in premiums written, Berkshire is the clear winner. AIG had a small 1.3%decline in premiums written, which the company offset with an increase in commercial rates around 6%. The chart below shows detail on the premium growth for both companies during the past five years. 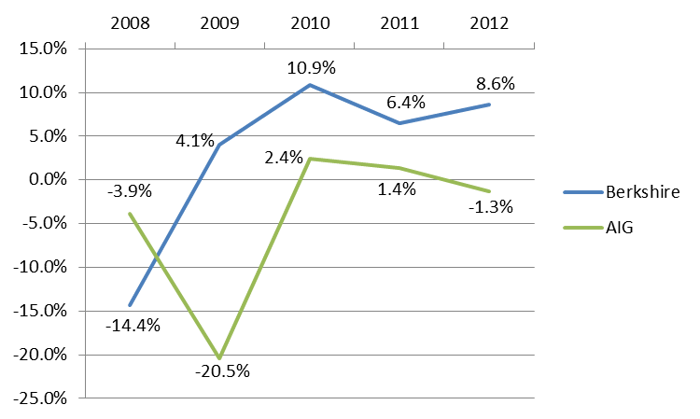 Berkshire has enjoyed GEICO's impressive climb toward the top of the auto-insurer totem poll -- it has improved its market share from 2.5% to 9.7% for personal auto coverage since 1995. AIG, on the other hand, had a huge decrease in premiums following its federal bailout, which is not a huge surprise. The company has been working its way back to pre-financial crisis levels and currently matches its 2009 premiums total.

3. Underwriting gains: Berkshire
Buffett's operations once again trounced AIG in the underwriting gains department. With a gain of $1.05 billion, Berkshire handily beat AIG's underwriting loss of $3 billion. Though it should be said that Hurricane Sandy contributed $2 billion to that loss. While AIG provides coverage for all types of property damage, Berkshire's exposure to Sandy was relatively limited to damaged cars, creating a lesser strain on the business' bottom line.

4. Investing returns: Tie
You would think this would be a no-brainer, right? But even though the Oracle from Omaha is in charge of investments at Berkshire, AIGkept up with the juggernaut and matched its 4.7%return on investment for 2012. AIG may have even gained a bit on the master, with a 0.2% improvement from 2011, while Berkshire's return actually slipped from 5.1% in 2011. The chart below tracks the companies' investment returns since 2008 and tells an interesting story about how each insurer has been performing. 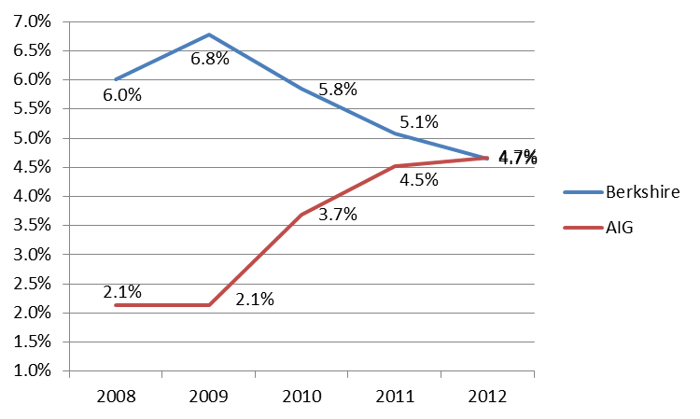 Since AIG was (and continues to be) under strict supervision, the company has tamed its investing habits, producing a stabler and more profitable investing strategy for the firm. Berkshire has been having a harder time producing the same returns as its previous years, despite increased capital available for investment.

5. Global presence and expansion opportunities: AIG
With most of Berkshire's operations focused on the U.S., AIG has a big advantage here. As one of the largest insurers in the world, AIG operates in 130 countries and has big plans for expansion into emerging markets. With its very strategic investment in the PICC Group, AIG has introduced itself to the growing Chinese middle class, who are presenting new opportunities for both property and casualty insurance and life and retirement policies. AIG will also be the exclusive provider of non-life insurance products in Turkey and France.

And the winner is... AIG.
Though the five categories above ultimately produced a tie, AIG has some major advantages over Berkshire going forward. With its underwriting losses mainly due to one-time items and catastrophic events, AIG is not as far behind Berkshire as first glance might lead you to believe. And an apt investing strategy is also paying off for the insurance giant, which will be a major boon for the company as it moves into new territory with its international operations and product-line expansions.

As the new hedge fund darling, AIG is primed for the spotlight going forward. With many big names in investing behind the resurgent insurer, you can be certain that AIG will be gaining favor on Main Street in no time.