Every investor can appreciate a stock that consistently beats the Street without getting ahead of its fundamentals and risking a meltdown. The best stocks offer sustainable market-beating gains, with improving financial metrics that support strong price growth. Let's take a look at what Cirrus Logic's (NASDAQ:CRUS) recent results tell us about its potential for future gains.

What the numbers tell you
The graphs you're about to see tell Cirrus' story, and we'll be grading the quality of that story in several ways.

Growth is important on both top and bottom lines, and an improving profit margin is a great sign that a company's become more efficient over time. Since profits may not always reported at a steady rate, we'll also look at how much Cirrus' free cash flow has grown in comparison to its net income.

A company that generates more earnings per share over time, regardless of the number of shares outstanding, is heading in the right direction. If Cirrus' share price has kept pace with its earnings growth, that's another good sign that its stock can move higher.

Is Cirrus managing its resources well? A company's return on equity should be improving, and its debt-to-equity ratio declining, if it's to earn our approval.

By the numbers
Now, let's take a look at Cirrus' key statistics: 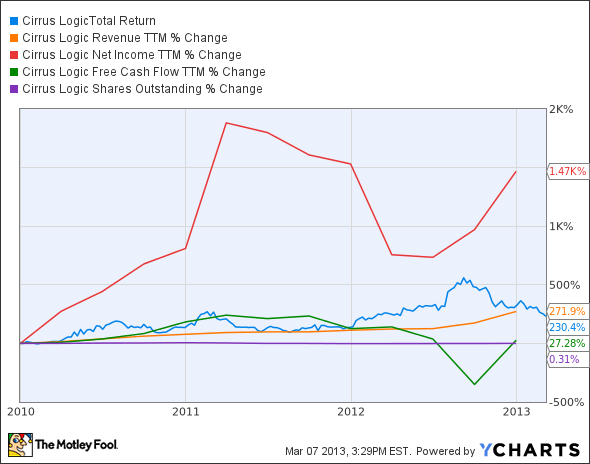 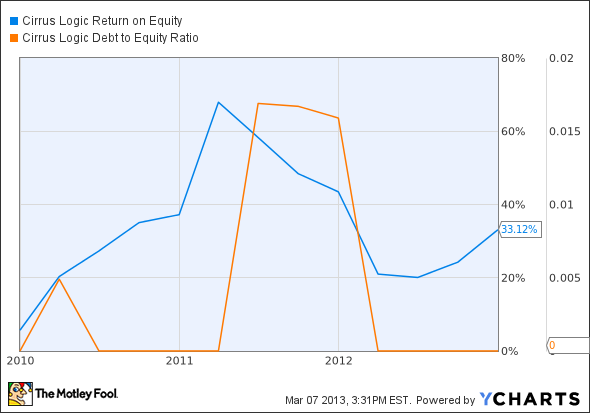 How we got here and where we're going
Cirrus turns in one of the strongest performances possible from a non-dividend stock, earning six out of seven passing grades with ease. Its only red flag is flattish levels of free cash flow compared to net income. Over the past three years, those two metrics have diverged from a nearly identical starting point to reach a point at which Cirrus is reporting nearly eight times as much net income as free cash flow. Then again, Cirrus may simply be a levered play on Apple's (NASDAQ:AAPL) future growth, as two of my Foolish colleagues debated last month. Given Cirrus' extreme reliance on Cupertino, is it still possible for the company to continue putting up market-destroying growth rates now that Apple's own growth seems to be returning to earth?

The recent performance of Apple's key suppliers highlights the risks of holding their stock alongside Apple's. Fellow Fool Rich Duprey recently pointed out that Cirrus, TriQuint Semiconductor (NASDAQ:TQNT), and Skyworks Solutions (NASDAQ:SWKS) have all been moving in a nearly identical direction as Apple since its slide began last fall. However, Apple isn't actually in slowdown mode yet -- it's just growing at a less fevered pace. TriQuint and Skyworks rely on Apple only about a third as much as Cirrus does -- neither earns more than 31% of revenue from the Mac maker, but Cirrus' third quarter saw 91% of all revenue coming from Cupertino.

The numbers are hard to dispute, though. Cirrus posted triple-digit year-over-year revenue growth in its latest quarter, a fact that did not escape the notice of the analysts behind The Motley Fool's 25 Best Companies in America. We can certainly appreciate this sort of growth more in a crowded field of Apple suppliers that are largely struggling to advance. Cirrus' dominance in the audio codec niche has been difficult for other chip makers to crack.

Cirrus' future is so dependent on Apple that it may not be right for investors who aren't certain that Apple will continue to grow. However, if you're still sold on the enduring popularity of iStuff, then Cirrus is one stock to keep a close eye on for the next few quarters.

Putting the pieces together
Today, Cirrus has many of the qualities that make up a great stock, but no stock is truly perfect. Digging deeper can help you uncover the answers you need to make a great buy -- or to stay away from a stock that's going nowhere.