A battle is brewing over natural gas exports, which is likely the first of many battlegrounds we must navigate as we continue to move forward without a real energy policy. At stake is the United States' dream of energy independence. By selling a piece of our future natural gas supply through LNG exportation to the highest bidder, we have the potential to let our dream of energy independence slip away. However, if we mandate that the supply of natural gas stay within our boarders, we restrict oil and gas companies from being participants in a true capitalist market, restricting economic profits and jobs creation.

According to the American Petroleum Institute:

The case for more exports is clearer than ever, and consistent with basic principles of economics. Trade is good. Exports are good. And if we allow natural gas producers to export natural gas when they find opportunities to do so, American workers and our nation's economy will be better off.

Understandably, not everyone agrees.

In a classic battle of the titans, ExxonMobil (NYSE:XOM) and Dow Chemical (NYSE:DOW) are in a rather public dispute over exports. As the nation's top natural gas producer, Exxon wouldn't mind to see the price of gas a little higher, while Dow is very content keeping things status quo, as it stands to benefit if the price of natural gas stays low. With exports likely to increase the price of gas, and eat into Dow's profits, it's chosen to fight against the rising tide to export our excess gas.

Dow is not alone in its fight, as other heavy manufactures that currently benefit from low natural gas prices have joined the crusade. The group of manufacturing heavyweights that includes aluminum maker Alcoa (NYSE:AA) and steel manufacturer Nucor (NYSE:NUE) have  joined an organization called America's Energy Advantage. Together, they make a very compelling argument to keep a lid on gas exports.

For every one manufacturing job we create, five more support and network jobs are added to the economy. Further, for every $1 of final sales of a U.S.-manufactured product, we receive $1.34 in output from other sectors of the economy. Those are just some of the reasons why Dow CEO Andrew Liveris has said that, "Rushing to sell natural gas to Europe and Asia risks damage to the U.S. Economy."

Alcoa's position is that we take a step back and consider the complete picture. The company:

Favors a balanced approach to energy policy, developing domestic and international markets while avoiding distortions that increase domestic price and/or price volatility. Stable and competitive energy costs help grow employment in industrial jobs, an important contributor to strengthening the middle class and the communities and regions where these employers are located ... While Alcoa agrees that there is a role for reasonable exports of LNG in the US gas market, we caution that quickly expanding exports of US LNG to non-Free Trade Agreement (FTA) countries, which represent over 80 percent of global LNG demand, could raise US prices substantially.

The worry here is that exporting our gas would drive up the price of domestic natural gas, thereby stifling growth as this key competitive advantage is eroded  The problem is that we can only estimate the effects exports would have on the market and, as you're probably well aware, few estimates actually prove true. In this case, according to estimates (opens into a PDF)  by the Energy Information Administration, the price of natural gas will rise in the future, whether or not we export. However, under a low volume export scenario, prices would increase by a further 14% over the next decade.

While that sounds like a lot, once you consider the overall volatility of natural gas, it makes it hard to put too much weight behind that number. For example, over the past year, natural gas has traded as low as $1.95 per million BTUs, and as high as $3.90 per million BTUs. So, rumors of a cold winter could, in theory, have more of an impact on the price of natural gas than exporting it overseas.

However, the other thing to consider, as Alcoa points out in its position statement, is that price increases could be as much as 54% under some scenarios if LNG exports hit 12 billion cubic feet per day. That's just half of the capacity represented by applications that have already been filed, which you can see from the following map: 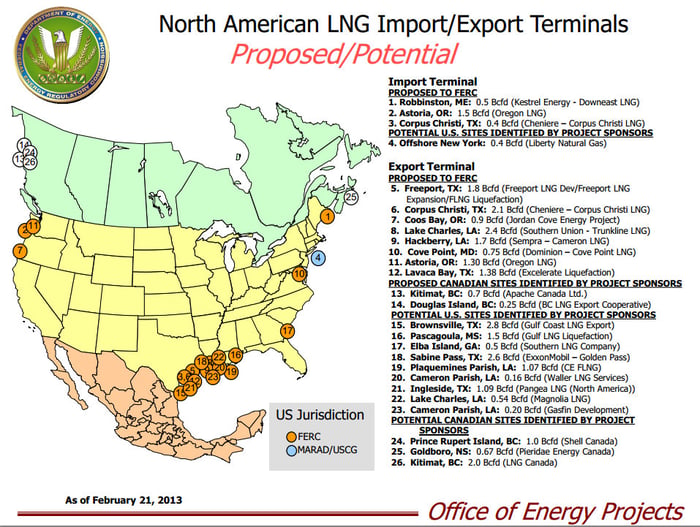 The real question is, are rising natural gas prices are such a bad thing? You'll note that, among the projects on that list, there is one by ExxonMobil. The company's Golden Pass Terminal, if approved, would enable the energy giant to sell natural gas overseas at higher prices. That means more drilling jobs, construction jobs and, of course, profits for investors. As a widely held stock by both mutual funds and exchange traded funds, those profits will touch many Americans.

On the other hand, higher natural gas prices could hurt the consumer, and has the potential to derail our manufacturing renaissance. As you can see, this is a real political hot potato with clear winners and losers, with a lot of questions in between.

That's one reason Nucor, which is completing the construction on a $750-million plant in Louisiana, isn't taking any chances. The new plant uses natural gas to strip oxygen from iron ore to make direct-reduced iron. This, when combined with scrap, can make steel at a much lower cost than scrap alone. However, without cheap natural gas the economics aren't as favorable.

The company has joined America's Energy Advantage to help curb exports in order to keep natural gas prices down. Right now, access to low-priced natural gas is a huge competitive advantage for the company. That's one reason why the company entered into a 20-year supply agreement with Encana (NYSE:OVV) to lock in its gas costs. It won't use the gas to fuel the plants; instead, it will sell the gas as a hedge against any price spikes in gas it buys locally.

The whole issue here is that there simply isn't enough demand coming from these heavy users to produce enough profits for companies like Encana and ExxonMobil. It's this classic battle of supply and demand that only has a clear solution depending on which side of the equation you stand on. If you're invested in producers, then you want to see gas go higher. However, if you're a consumer who looks at your utility bills, or is invested in heavy gas, you'll favor curbing exports.

That's what makes this such an intriguing issue to follow. Both sides are, of course, motivated by profits and, therefore, have a self-interest to protect. Not only that, but both have reasonable, if not compelling, arguments that deserve to be heard. Personally, I lean toward allowing exports, though my preference is to see us develop more ways to use it here at home.