Recently, I've been wondering if oil and gas asset sales to national oil companies have the potential to jeopardize our dreams of energy independence. In the past couple of years, we've seen domestic energy producers such as Devon Energy (NYSE:DVN) and Chesapeake Energy (OTC:CHKA.Q) rake in billions of dollars by selling a piece of future oil and gas production. It's becoming pretty clear that more deals are on the way.

Probably feeling the pressure of competition following Chesapeake's $1.02 billion Mississippian Lime joint venture with rival Sinopec, China National Petroleum Company's chairman recently said that it's currently studying whether it, too, will join the fray. As that nation's largest oil company it has the financial firepower to pursue a big deal. Overall, Chinese explorers have an estimated $40 billion to spend on locking up production.

One of the issues is that these companies could be bidding for our production assets with an unfair competitive advantage, as they can use Chinese government loans to stake their claim. Most of the U.S. deals involve having these companies simply buying joint venture stakes in production assets, with Chesapeake's sale involving a 50% stake in 850,000 net acres. Devon also recently completed a transaction with Sinopec totaling $2.5 billion in which it sold a 33% interest in three emerging energy plays, including the Mississippian. The company uses these to minimize exploration costs by de-risking the acreage and increasing exploration activity. A larger looming issue will be when a Chinese national bids for control of a U.S. oil and gas producer.

The question is, what are the Chinese and other foreign buyers after? It's not to lock up supply and ship it back to China, as instead the production will be sold in the states. The profits, on the other hand, will eventually make their way back to the mainland, which can then be used to purchase oil and gas on the open market. However, that's probably not the real reason behind these deals. Instead, it's more about the technology being used to unlock our vast shale resource.

You see, China has its own untapped resource potential, as the country is believed to hold the world's third largest recoverable natural gas reserves. The problem is that most of these reserves are trapped in shale: 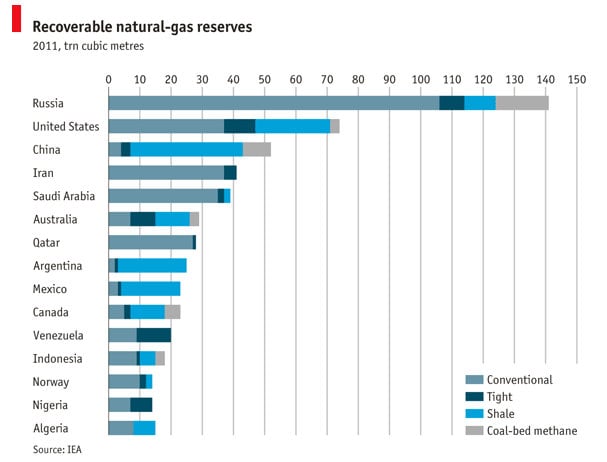 To best understand how to tap its own reserves, the country's oil and gas companies are investing in the U.S. companies that have harnessed the technology to unlock our shale. Because our assets are cheaper on a relative basis and our political climate is stable, it makes the most sense to invest directly in U.S. production and learn firsthand.

In conjunction with a growing number of asset transactions, U.S. oil-field service companies with expertise in fracking are setting up shop in mainland China. Both Baker Hughes (NYSE:BHI) and Halliburton (NYSE:HAL) have set up strategic partnerships with Chinese companies. Baker Hughes is setting up a research center for unconventional energy as well as investing in the development of technologies specific to China's unconventional resources. Meanwhile, Halliburton is providing key software solutions to map out the resources so that Chinese operators can determine how to best extract the energy underneath its soil.

Because China plans to cap its crude imports to 61% of the country's total consumption by 2015, it needs to work fast to get up to speed on these technologies so it can meet its goal. Currently, the country relies on imported crude to meet 56.4% of consumption, but the concern is how fast its consumption is growing. That's where the third leg of its plan comes into play, and that's where international oil companies are investing in mainland China to exploit these shale resources.

Think of this as the reverse of what's happening here in America. In one such example, leading U.S. independent oil and gas producer ConocoPhillips (NYSE:COP) has two joint study agreements covering 1.5 million acres on mainland China. These ventures give the company access to high-quality shale plays while the Chinese operators, Sinopec and PetroChina, get both capital and expertise.

While on one hand we might fear that we are jeopardizing our own future of energy independence, as we look at the whole picture we can get a better understanding of what's truly happening here. China is facing its own energy challenges, so it's investing here in the U.S. so that it can reinvest back home to meet that challenge. While some might worry that our energy will one day be stamped "Made in China," that's a highly improbably outcome given the challenges that country still must overcome.

Will Our Energy Be Stamped "Made in China," Too? @themotleyfool #stocks $CHKA.Q $DVN $HAL $BHI $COP Next Article
Current