I'm an unabashed growth investor. Not just any old growth, but the kind of earth-shaking hypergrowth that comes with disrupting traditional business ideas. If our Rule Breakers newsletter had a star constellation in the zodiac, I'd be born under it.

So I hope you're not surprised to learn that 4 of my 15 stock positions come straight from David Gardner's growth-focused newsletter. Two more live on David's side of the scorecard in our Stock Advisor service.

Netflix: Through thick and thin
Video maven Netflix is not just my largest holding but also my oldest. I first got into the stock at $28 per share, way back in 2006. That was when Blockbuster made a serious attempt to kill its newfangled rival, only to fatally weaken its own financial health instead. I had just done several months of intensive research on the movie rental industry, and came away convinced that Netflix had that game in the bag. That's when I bought my first Netflix shares.

The stock price has multiplied more than five-fold since then, which goes a long way toward explaining its large stature in my portfolio. But that's not the whole story.

Many investors might have taken their profits and headed for the exits when Netflix traded at $300 per share. I didn't because I saw even higher values in the years ahead. The all-digital strategy of global domination had barely started to play out in those heady days of early 2011.

Many more might have -- and did -- run away when Netflix changed its service prices, separated the digital church from its DVD state, and wanted to cram a totally separate DVD service named Qwikster down our throats. This trifecta of management errors played out in a matter of weeks, and the stock lost three-quarters of its value.

I thought about the mistakes and, yes, I briefly considered selling. But CEO Reed Hastings saw the error of his ways, reversed the unforgivable Qwikster mistake (which might have worked just fine in 2013, mind you!), and vowed to tread more carefully when making large changes to the core business plan.

Netflix is still way ahead of the admittedly growing pack of hungry rivals. Everyone wants to rule the just-blossoming era of digital video distribution. So far, only Netflix has found a business model that works, and the company has a lead time of several years as the others figure out its secret sauce for customer satisfaction.

So I stayed. Not only that, but I bought more shares at $83. Hastings has done nothing to lose my long-term trust since then, and I still see outsized value in the stock.

This growth story is just getting started. I'm letting this winner run for the long haul. Quite possibly decades.

The company makes surgical robots that help human surgeons make smaller, cleaner, and more precise operations. They're not a replacement for trained doctors, but a powerful tool in their skilled hands.

What's so disruptive about that?

It's a combination of several important factors: 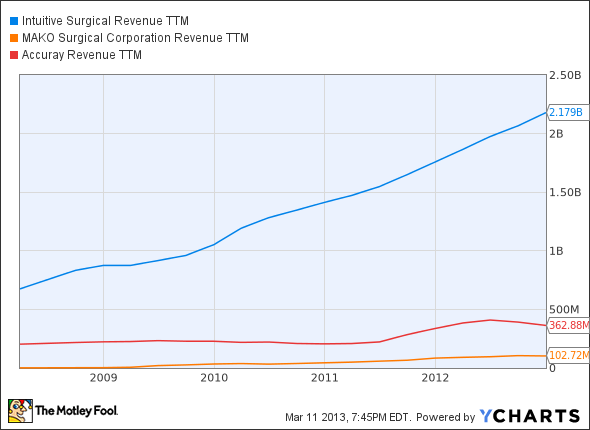 This stock has just about doubled since I bought it in 2010, and I expect it to double again in the next five years. That being said, I recently took some profits on my position to diversify my holdings a bit. (What did I buy? The best stock for new money now, of course!) The position had grown almost as large as my Netflix holdings, and I'm somewhat more confident in Netflix staying sharp for decades to come. I'm more of a tech guy than a medical expert, after all.