This month, when Ford (NYSE:F) releases its documents and reveals Alan Mulally's compensation, two things are guaranteed. One is that Mulally makes a lot of money, and the other is that people will complain that it's too much money for one executive to earn.

My response to the complainers? Get over it.

In fact, let me show you why Mulally's worth every single dollar as we review Ford under Mulally's reign over the past six years.

When Mulally first took over in September 2006, he had quite a hill to climb. Ford had long since deteriorated from the company that invented the assembly line and envisioned an automotive industry far ahead of its time. In 2006, Ford reported a $12.6 billion loss, almost $2,000 for every car or truck sold that year. That's a staggering amount, and it was the worst loss in more than 100 years of Ford's history. From 2006 to 2008, the company managed to lose a whopping $30 billion.

Now, take a look at how things have changed under Mulally. 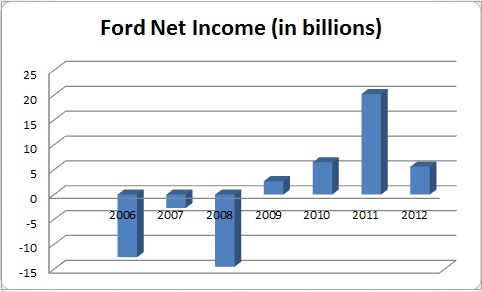 The spike in 2011 was due to a one-time write-off, but you can clearly see the incredible turnaround. The stock price has reacted as well, gaining more than 50% since 2006.

From red to black
At the end of 2008, in the midst of a recession, Ford announced that it was confident it would return to profitability by 2011. It was hard to believe Ford at the time, since GM and Chrysler had asked Uncle Sam for billions to stay afloat, and Detroit's Big Three could barely give cars away. Yet a mere year later, Ford was able to report its first annual profit – for the full year 2009 -- in four years. It was two years ahead of schedule because of $5 billion saved in manufacturing and advertising cuts. It also benefited from a $1.3 billing profit from Ford Credit, which is now helping offset losses in Europe.

Let's see why Mulally is responsible for those $5 billion in cuts and how it's linked to his bonuses.

Mulally's vision
Mulally put together a plan to unite the company under one mission and named the initiative "One Ford." Here are two points from that plan, the first of which directly helped the company save billions.

1. Aggressively restructure to operate profitably at the current demand and changing model mix.
After the recession, Ford sold off slacking brands, helping it return to its core vehicle portfolio. In 2007, when Ford owned Volvo, Jaguar, Land Rover, and Aston Martin, its market share was 15.8%. After it went on a diet and cut all those brands, its share today sits at 15.5%. It saved a lot of operating costs and didn't lose market share or net income.

In addition to trimming fat from the top-level brands, it also created efficiency at the most basic level. By the end of 2013, Ford plans to continue its platform consolidation, with 85% of global sales to come from nine vehicle platforms.

This first point of Mulally's vision is definitely responsible for helping Ford return to profitability ahead of schedule. Let's look at another point from the "One Ford" plan.

2. Accelerate development of new products our customers want and value.
Ford has pushed out new vehicles in popular segments that are selling well, and February offered further proof. The refreshed Fusion posted a record month, with a 28% gain over February 2012. The refreshed Escape, meanwhile, set two consecutive record sales months in a row, with February bringing a 29% gain over last year. And not to be left behind, sales of the Explorer surged 59% over last year for its best February in seven years.

Don't take it from me. Here's Ken Czubay, Ford's vice president of U.S. marketing, sales and service: "As more new vehicle buyers continue returning to the marketplace, our fresh new product portfolio of fuel-efficient vehicles is winning over customers. People are buying our all-new Fusion and Escape in record numbers, thanks to strong fuel economy and innovative new technologies."

Thus far, both of these points from Mulally's One Ford plan have been home runs, with manufacturing costs in decline and consumers buying into the new vehicles. Now, let's check out how this all links to his recent bonus.

Vested, or not?
For completing an incentive program that cut the number of Ford's platforms, creating a leaner operation, the company has awarded Mulally shares of restricted stock this week -- 909,179, to be exact, roughly equaling $12 million at today's stock price. He won't touch the stock until 2015, when it becomes fully vested. The next time you hear people complain about Ford's bonuses, tell them Ford became profitable two years ahead of schedule because of the "One Ford" vision Mulally set forth. The bonus figures have been released, but it won't be known until later this month what his actual 2012 base salary was. But for comparison, in 2011 he received $2 million in salary and $5.5 million in cash bonuses, not including stock options.

Bottom line
One important thing to look for while investing is a management with a vested interest. I'd much rather own stock in a company that has high inside ownership. This is especially true with Ford, as the family still owns a massive amount of stock, as does Mulally. You can complain that through bonuses he has amassed a large amount of stock in a short period of time. My response is that it merely strengthens his interest in seeing the company perform up to its highest potential. Ford has flipped right-side-up since he took over in 2006 and is producing record profits. If you want my opinion, as a shareholder, I'd offer to double his salary if he'd agree to stay on until 2020. He's worth every penny, and he's proved it time and time again.