With just hours to go ahead of Samsung's Galaxy S IV unveiling, Apple (NASDAQ:AAPL) marketing chief Phil Schiller has stepped out into the spotlight in an attempt to rain on Google (NASDAQ:GOOGL) Android's parade.

Tim Cook's Apple is very different than Steve Jobs' Apple in many ways; one such way is that the company is much more talkative and engaged with the press. Cook himself did a couple of media interviews three months ago with NBC and Bloomberg Businessweek, and Apple issues more press releases nowadays to increase communication with the public.

Schiller's pair of sit-downs was with The Wall Street Journal and Reuters. What did Apple's main marketer have to say?

The executive called Android a "free replacement for a feature phone," which is certainly true in many cases since the open-source platform is able to target remarkably low price points at times. Of course, there are plenty of high-end flagship devices running Android, and everything in between.

Schiller says that when you first open an Android gadget, you're required to sign up with "nine" different accounts with different companies just to get the same experience that one single iOS login delivers. Since so many companies pitch in to the end product, all of the different aspects "don't work seamlessly together" either.

What Schiller is likely referring to is the Android version distribution stats that Google posts for developers.

Jelly Bean is Android's latest and greatest, but is only on 16.5% of devices. Gingerbread was initially released in December 2010, and is now over two years old. Gingerbread and older versions still comprise 53.7% of devices, since third-party carriers and OEMs bottleneck software updates.

Schiller cites the iPhone maker's internal research data as indicating that four times as many consumers switch from Android to iOS than vice versa. That may be in part because Apple's ecosystem has been shown to be much stickier than Google's. iOS users have a much higher propensity to spend money on apps and content, which dramatically increases switching costs should they ever wish to defect.

In related news
A week ago, Schiller also tweeted another jab at Android: "Be safe out there." He shared a link (opens PDF) to a third-party research report from security specialist F-Secure that outlined mobile threats in the fourth quarter. The report showed a precipitous rise in Android malware, which had nearly doubled sequentially from the third quarter. F-Secure concluded, "Android malware has been strengthening its position in the mobile threat scene." 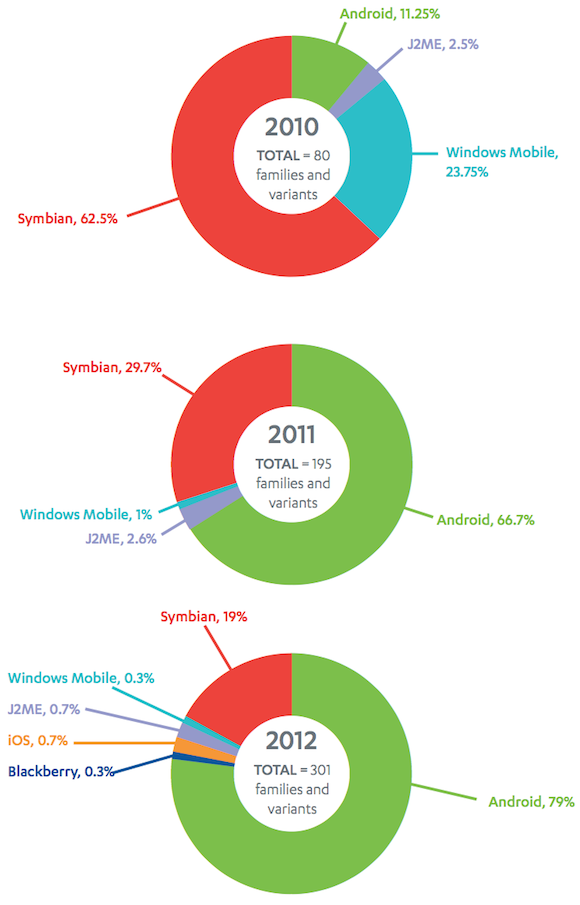 The rise was attributed to Android's dominant market share position, since unsavory types tend to target the widest audiences. By that rationale, it makes sense that hackers are giving up on Nokia's Symbian platform, since the Finnish company has effectively abandoned it also in favor of Microsoft Windows Phone. The security threats on Symbian have declined steadily in accordance with its market share.

Time well spent?
Schiller's been busy making the rounds at undermining Android. At the same time, Apple's marketing campaigns have notably lacked the appeal that the company is known for, while Samsung has been gaining ground with brand appeal. Perhaps Schiller should focus more time on reinvigorating Apple's marketing.