Frequently lost behind the multitude of stories about America's bursting-at-the-seams oil production is that much of this newly produced oil is just sitting around because of a lack of takeaway capacity at America's oil hubs.

Many of our domestic oil plays lack the necessary pipeline infrastructure to bring oil to market, and that has resulted in a prolonged period of low oil prices. That's great for refiners, but it can be rough on producers. Much of the problem is expected to be resolved by 2014, after a number of pipeline projects come online. However, oil producers in the Permian Basin are starting to see some important changes right now. Today we'll take a closer look at what's going on in the West Texas oil game.

Stretching across West Texas and into New Mexico, the Permian Basin features a mix of carbonate and sandstone formations. Some formations, in fact, are stacked on top of each other in certain locations, making the region home to some pretty enticing drilling opportunities, both horizontal and vertical. 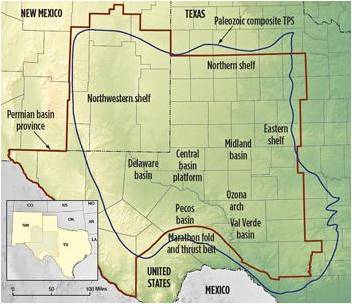 Historically, this West Texas oil play is one of the most prolific oil-producing regions in the United States. Production in the Permian Basin peaked in 1973 at 2.085 million barrels per day. Current production is estimated to be close to 1 million bpd but is expected to grow significantly, reaching 1.86 million by 2016, according to Bentek Energy. The top dog in the play, Occidental Petroleum (NYSE:OXY), produced 146,000 barrels of per day there in the fourth quarter of 2012.

Finally, earlier this week WTI-Midland rose to a premium over WTI-Cushing for the first time in nearly three years. The increase comes on anticipation of the start of Magellan Midstream Partners' Longhorn Pipeline system, which should commence shipping crude to the Gulf Coast in mid-April.

Magellan reversed the Longhorn and will be capable of transporting 75,000 barrels per day from the Permian to the Gulf. That number is expected to climb to 225,000 by the third quarter of this year.

DCP Midstream (NYSE: DCP) will also bring a Permian-Gulf Coast pipeline online this summer. This pipe will have an initial capacity of 200,000 bpd, eventually expanding to 350,000 bpd.

The Midland premium was only $0.10 as of Tuesday, but it's the first premium since May of 2010, and that's significant. West Texas Sour narrowed its discount to $0.25, the smallest gap since April 2009.

While Gulf Coast refiners may be disappointed that the price of oil is going up, it's still cheaper than imported crude, and higher prices typically incentivize producers to keep drilling, which bodes well for the long-term outlook for investors of both types of companies.

Recent deals
The resurgence of the Permian has also affected merger and acquisition activity. This is a very hot play right now -- so hot that some companies are buying into it for the first time, and another is coming back after a 20-year absence. Let's look at some of the deals that have been announced over the past few weeks:

That is an awful lot of activity in a short period of time. Growing production and improved takeaway capacity will only encourage more deals in the future.

Foolish takeaway
The combination of enhanced oil recovery techniques in the mature fields and horizontal drilling in others mean that production in the Permian will continue to climb in the years ahead, which means there may be significant upside to oil producers like Occidental, as well as midstream infrastructure companies.