Diversifying your portfolio geographically is critically important. Not only does it allow you to participate in the turbocharged growth of developing nations, but it also protects your investment returns from regional economic downturns. Let's first take a look at the benefits of global diversification. Then we'll examine one of the simplest ways to achieve it.

The ying and yang of investing abroad
Gaining exposure to the developing world's economic growth is the single most obvious reason to diversify globally. Over the past decade, emerging-market economies grew much faster than the developed world. From 2002 to 2012, developing Asian nations' GDP grew an average 8.6% annually, while major advanced economies grew 1.3% per year.

Global diversification also hedges against regional economic downturns. From the precarious 2007-2009 time period, developing economies bounced back faster than developed economies. In 2011, the GDP of developing and emerging economies increased by 6.2%, while growth in the developed world sputtered at a 1.6% growth rate. But we're now witnessing strength in many developed markets like the U.S. and more tempered growth in emerging markets.

Best of both worlds
The most effective way to balance the benefits of global diversification -- without exposing your portfolio to unnecessary risk -- is by investing in U.S.-based companies that derive significant portions of their revenue overseas. One of the world's most respected companies and a great example of a company with global exposure is Coca-Cola (NYSE:KO).

Brand consultancy firm Interbrand crowned the ubiquitous cola company’s flagship brand "The Best Global Brand" in 2012, a distinction Coca-Cola has received every single year since the survey’s 2001 inception! That's what you call a blockbuster brand. With its products enjoyed nearly 2 billion times a day, Coca-Cola is ruler of the nonalcoholic beverage space.

It comes as no surprise that Coke is well recognized internationally. The company sells its 500 beverage brands in more than 200 countries. Of its 27 billion cases sold annually, almost 80% are sold outside North America. Unit case volume growth was up 5% in 2012 in Coke's Latin American division and up 11% in Eurasia and Africa. In fact, Coca-Cola and Minute Maid were voted China's favorite brands, and Sprite is the country's largest sparkling brand.

And by no means is Coke done quenching parched mouths around the globe. In fact, during a recent interview with Charlie Rose, Coca-Cola CEO Muhtar Kent stated, "Roughly 4% of the population of the world live in the U.S., and we’re a consumer goods company. So we sell where the people are." As a result, Coke is spending billions of dollars in growing its presence in emerging nations such as India and China.

A win for investors
This global diversification has greatly contributed not only to Coke's revenue growth, but also to its solid stock performance. Amid fierce macroeconomic headwinds in the developed world since 2007, Coke's total revenue has grown an impressive 65%, from nearly $29 billion to $48 billion in 2012.

And Coke's stock price has responded accordingly. During the past decade, an investment in Coke returned 215% for shareholders, beating both the S&P 500 and consumer staples sector by almost two times. 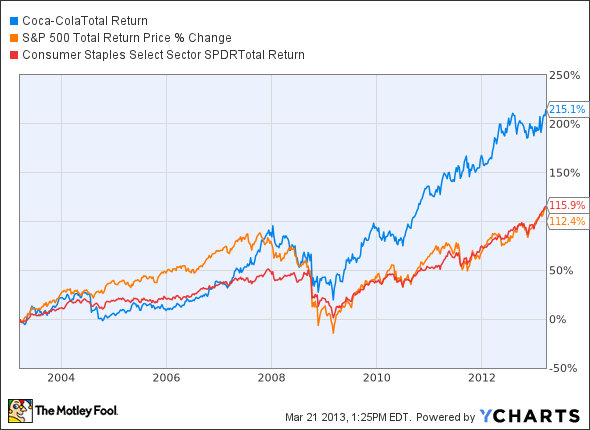 But these three competitors don't even come close to Coke's sales diversity. Major rival PepsiCo derives 43% of its revenues internationally. But PepsiCo has recently been a tale of two segments -- an innovative and well-performing snacks division, led by market-share-leading Frito Lay, and a beverage segment that's been losing market share to Coke. Meanwhile, Dr Pepper Snapple operates primarily in mature North American markets. And while California-based Monster Beverage is now selling its beverages in new international markets, most of its sales are in the U.S.

Foolish bottom line
There's no question that Coke faces challenges. In addition to legislative and regulatory risks, every other cola company on the planet would love to dethrone the king of cola. But its global diversification and ample international growth opportunities give Coca-Cola a leg up on the competition.