Canada has a problem. While it might have the world's second-largest crude oil source, right now its oil is way too cheap. Before you start to get excited that the price might come down at the pump, I should warn you: The reason that oil is cheap is that its stuck up there. Blame the lack of pipeline capacity to take that oil to the refining marketplace. So, just how cheap is Canadian crude oil you ask? Take a look at the chart below: 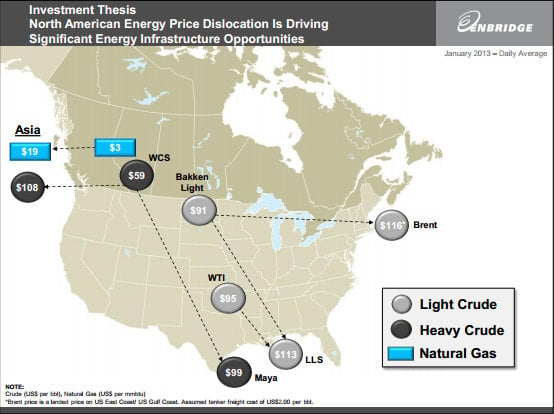 A price differential that large -- more than $40 -- is causing producers to get creative to get Canadian oil to market. They need to be creative, because as tough as it is for current producers, it could get much worse. There is an impressive list of projects expected to begin production over the next few years. Among them is ExxonMobil's (NYSE:XOM) massive Kearl oil sands project. The $12.9 billion project is eventually expected to produce 345,000 barrels of oil per day.

That oil, along with the myriad other production projects ramping up over the coming years, needs access to the refining market. The good news is that there are two catalysts on the horizon that, when taken together, should help provide a boost to the price of oil even as more of it starts flowing. While that might not be what your wallet wants to hear, it is better than shipping that oil to China or continuing to import it from the Middle East.

While Canadian producers aren't fond of selling lower-priced crude, oil refiner Phillips 66 (NYSE:PSX) is working overtime to increase its access to this price-advantaged crude oil. For every dollar per barrel the company can save, it equates to $450 million being added to its bottom line. To help make this happen the company has ordered 2,000 rail cars to transport crude oil to its refineries. It also recently signed an agreement to have Canadian crude oil shipped by rail and then barge to its refinery in Washington State.

Many others are joining the crude oil by rail bonanza. Among them, Canadian National Railway (NYSE:CNI), which didn't move any crude oil two years ago. This year the company is projected to move 30,000 carloads of oil. What's really quite amazing is that everyone wins. Refiners access cheaper crude oil, rail company's enjoy the transportation earnings and producers are able to earn $18 per barrel more than oil shipped by pipe because of all those pipeline bottlenecks. The big question is if these are just temporary profits until those pipeline bottlenecks get sorted out.

Significant pipeline expansions
Rail is hot today, but will it be needed tomorrow. The U.S. imports 15% of its oil from Canada. Of that, more than half of it comes through a pipeline owned by Enbridge (NYSE:ENB). The company is spending billions to keep it that way. The good thing for producers is that the company is not alone.

Pipeline operators are working feverishly to build additional pipeline capacity to get this crude oil to market. While TransCanada's Keystone XL gets a lot of the press, it is just one of many projects aimed at moving crude oil. There problem is that these projects aren't cheap and take years to complete. Take the Trans Mountain expansion by Kinder Morgan Partners (NYSE: KMP) which is the only oil sands pipeline serving the West Coast. The $5.4 billion project, which will increase the pipeline's capacity from 300,000 to 890,000 barrels per day, wouldn't be operational until 2017. Right now the cost and construction time frame is opening up a massive opportunity for crude oil transportation by rail. However, there's a lot of planned infrastructure coming on line over the next few years which could change that.

My Foolish take
In the near term, expect crude oil shipments by rail to continue to gain prominence. It's the quickest way to get oil to market while these pipelines are being built. Longer term, pipelines will offer the cheaper shipping option; however, it is possible that shipping costs will come down enough to make it more practical to continue to ship crude by rail. The big takeaway here is that Canadian crude oil won't stay cheap for long.