What does the future hold for GT Advanced Technologies, Power-One, and First Solar?

The alternative energy industry is going through a major transition, which has left a number of companies in bankruptcy. Most recently, Suntech Power, formerly the largest solar manufacturer in the world, defaulted on loans and was forced into insolvency.

Today, I will take a look at the hopes for survival of three high-profile companies in alternative energy that have many challenges ahead.

GT Advanced Technologies
A year ago, I was very bullish on the businesses GT Advanced Technologies (NASDAQ: GTAT) operates in, and optimistic about the future of the company. But since then there's been a continuation of falling prices in end markets, and equipment orders aren't coming through as quickly as investors once hoped.

The HiCz System was supposed to change the game for solar, bringing cell efficiency from 18.5% to over 22%, a huge improvement for the industry. But its commercial launch has been pushed back to 2014 and it appears that order intake is slower than expected.

Sapphire technology started with a bang for GTAT and could be used for everything from lighting to cell phone screens, but similar cost pressures as those in the solar industry have hurt orders. During the second half of 2013 the industry is expected to pick up as new applications begin to gain market adoption.

The company fell to a $159.4 million loss in Q4 2012; with $297 million in debt versus $418 million in cash the company can't afford to have many more quarters like that. The problem is that management expects to lose money on a GAAP basis again this year, despite a $1.2 billion backlog.

Will GTAT survive? I think so because the company has a decent balance sheet and should have long-term growth in the markets it serves. But this isn't a bet I'd make until we see demand and cash flow pick up, something for which we've been waiting a long time.

Power-One
The inverter market is supposed to be hot, but Power-One (NASDAQ: PWER) can't seem to gain any traction on the stock market. Micro-inverter competitor Enphase (ENPH -4.20%) has actually been the hotter stock recently, while Power-One bounces around near 52-week lows. 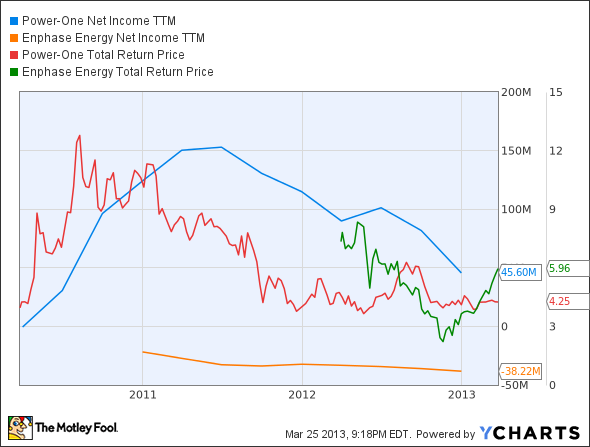 Investors are struggling with the direction of results, both on the top and bottom lines. A great balance sheet is only a strength until you start burning cash with losses, something we've seen before in alternative energy. If declining sales continue that's where Power-One is headed.

In the end, Power-One is in a growing business, it's making a profit, and it's generating free cash flow. I'm not confident enough to say Power-One will outperform the market but I think this is one company that will survive for years to come.

First Solar
The story of First Solar (FSLR -0.19%) over the past decade encapsulates that of the entire solar industry. There was euphoria in the mid-2000s when European countries handed out generous subsidies and there was more than enough demand for all the panels First Solar could make. But as the decade wore on, China began building a solar behemoth, driven by easy money from state-run banks. The solar bubble burst and companies began dropping like flies across the industry. At the same time, First Solar's stock dropped like a rock. 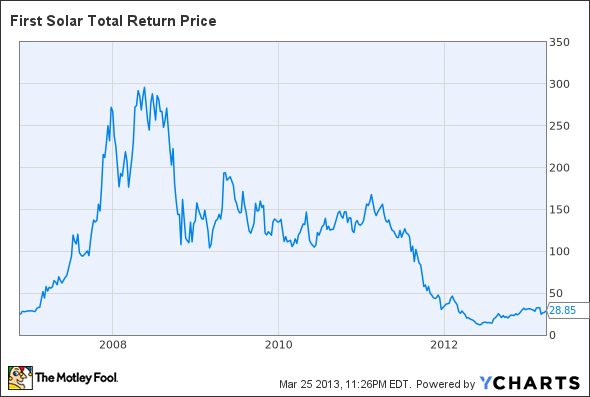 So far, the company has survived the worst, but the real challenge lies ahead. First Solar's thin-film technology is falling behind its rivals', particularly those making high-efficiency panels like SunPower (SPWR -4.97%). First Solar has virtually no share in the steady growing residential market, also dominated by SunPower, relying instead on giant projects to generate revenue.

The problem is, these huge projects are drying up. Utilities in the U.S. are getting enough renewable energy from distributed solar (residential and commercial) and don't have to sign up for huge projects to meet mandates anymore. Worldwide, First Solar is having some success signing big deals, but it's not enough to fill its backlog.

First Solar is one company I'm confident won't survive without major strategic changes. The company is setting up to make that happen but investors shouldn't buy into the future until they know how this plays out.

Foolish bottom line
I'm confident Power-One will survive but GT Advanced Technologies and First Solar have much larger challenges ahead. Which companies do you think will survive and who will thrive? Leave your thoughts in our comments section below.

Why Chevron's Modest Dividend Hike Was the Right Call