For years, it seemed like the housing market would never turn around. However, recent data indicates that the U.S. is finally in the midst of a housing recovery. But have investors missed out?

Pointing to a recovery

New home purchases recently spiked to numbers we've not witnessed since 2008. Builders are constructing new homes at a pace not seen since five years ago, and building permits, considered a leading indicator of construction, are nearing a five-year high.

The housing market is also witnessing limited inventories. According to the National Association of Realtors, "Total housing inventory at the end of February represented a 4.7-month supply, up from 4.3 months in January, which was the lowest supply since May 2005. Listed inventory is 19.2% below a year ago when there was a 6.4-month supply."

And cheaper borrowing costs are enticing buyers who are able to qualify for mortgage loans. Even though the 30-year mortgage rate hit a record low of 3.31% last November, the average rate on a 30-year fixed loan still hovers at an unbelievably low 3.53%.

Putting on the finishing touches... or just laying the foundation?
Put together, this trifecta of robust sales, limited inventories, and cheap borrowing costs are driving new home orders. Business is booming again for builders such as Lennar (NYSE:LEN) and KB Home (NYSE:KBH). New home orders for Lennar recently surged 34%. The homebuilder's most recent quarterly profit tripled, handily beating Wall Street's expectations. And in its March 21 earnings release, KB Home beat expectations on both top and bottom lines, and its new orders also grew.

So where does this recovery leave investors? Did we miss the wave? Well, the surge in share prices of homebuilders would suggest we have. 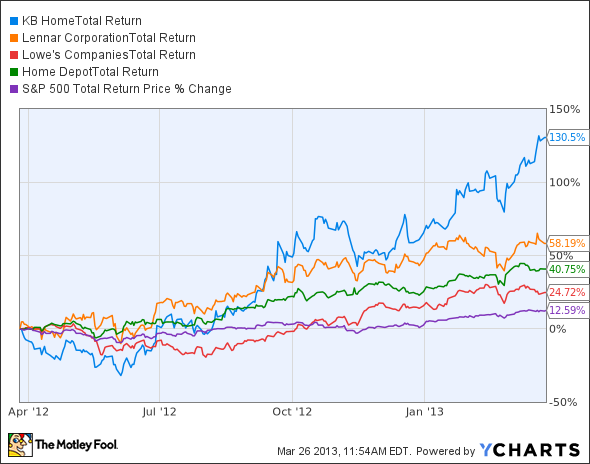 Over the past year, KB Home's share price returned 10 times that of the S&P 500. Meanwhile, homebuilding peer Lennar's stock increased 58% during the same period. But gains in homebuilding also filter through to other parts of the economy. Home-improvement retailers Home Depot (NYSE:HD) and Lowe's (NYSE:LOW) have also vastly outperformed the broader stock market.

In response to homeowners putting the minimal amount of dollars in their homes during the past several years, Home Depot and Lowe's got accustomed to years of slashing costs and trimming jobs. But these companies are preparing for a change. Home Depot acquired two companies last year, both aligned with its view that home remodeling will pick up in the near future. Both retailers have enhanced their websites, allowing homeowners to design their home-improvement projects and communicate with retailers' employees.

Lowe's CEO Robert Niblock recently summed up his thoughts at a recent analyst conference when he stated, "Consumers feel much better when it comes to spending on their home if they believe the value is going up. It's just that kind of, I call it, the psychological permission to spend and feel good about it." In preparation for the anticipated surge in remodel spending, Lowe's is adding 9,000 permanent part-time employees.

Specialty home-goods and furniture retailers have benefited from the housing market recovery as well. Williams-Sonoma (NYSE:WSM) stock is up more than 32% over the past 12 months, buoyed by last week's report that quarterly profit exceeded estimates. The niche retailer announced that revenue increased 11%, citing an improved U.S. housing market that has encouraged consumers to refurnish their homes. Meanwhile, competitor Restoration Hardware (NYSE:RH) is in the midst of expanding beyond its current 73 retail locations. It's stock is up nearly 13% since its November 2012 IPO.

Foolish bottom line
It's official. The data clearly points to a housing turnaround. But have you missed out on the rebound? If you own any of these stocks, you've recently enjoyed nice returns. But the nuggets of good economic news are just the start of a housing recovery that may take the better part of a decade to come to fruition. So, don't be discouraged if you've missed this initial wave. These companies have plenty of growth potential beyond their recent successes.

Did You Miss Out on the Housing Rebound? @themotleyfool #stocks $HD $LOW $KBH $LEN $WSM $RH Next Article
Current