Is health insurance really insurance -- and does it matter?

True insurance protects against catastrophic losses. Think of flood insurance covering the damage as the couch floats by the window, or a life insurance policy paying out after a loved one's death. Health insurance slants more toward maintenance care, such as annual checkups, that the other insurances tend to avoid. Good luck getting your car insurance to pick up your 60,000-mile tuneup.

The different types of insurance have had similar means of funding. Customers pay a fee set according to risk level. Screening guidelines kept out the riskiest individuals and mitigated the overall level of risk the company would assume. The excluded might have included homes in hurricane-prone areas or individuals with a history of serious health problems.

But the Affordable Care Act, or ACA, is changing how private health insurers can screen patients and the premiums they can charge. That change is causing a new health industry shift that could redefine its future.

Redefining health insurance
Health insurance in the United States dates back to the Civil War era, when accident coverage proved popular enough to encourage more comprehensive private plans. But insurance as we know it started much later, following some innovations in the medical community. A look at that start helps explain the current path.

In 1929, a doctor at Baylor University Hospital in Texas noticed that teachers weren't settling medical bills. So he started a system where the teachers could pay in a small amount, or a premium, and receive up to 21 days of health coverage  The Baylor Plan began to spread as the Great Depression took off.

Cut to three decades later and a group of hospitals decided to merge their plans into one nonprofit called Blue Cross. The company faced increasing competition from private plans -- which charged premiums based on level of risk -- and soon adopted a similar business model. The methods of the private plans became the norm.

Insurers thrived in the new market and have continued to evolve over the years. Five companies have fought to the top of the heap as business boomed. Take a look at how those company's performed versus the S&P 500 over the past 10 years. 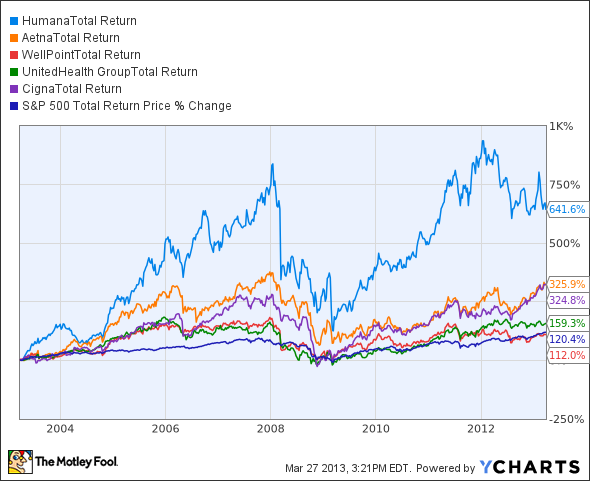 Most of the companies have grown significantly over the past years thanks to acquisitions.  Here's how they stacked up in market position at the end of fiscal 2012.

But change is in the wind, thanks to the ACA, and insurers won't have the same risk mitigation options. Under the new health insurance exchanges, insurers can't deny coverage based on pre-existing conditions and have limits to how much they can increase premium charges due to a patient's history.

The insurers' long history of adaptation has come in handy.

New focus
Medicare and Medicaid coverage have become increasingly popular due to the growths in the aging population and potential ACA-related Medicaid expansions.  Yes, those patient groups also carry a deal of risk -- but it's government-sponsored risk that also helps with general diversification.

Last year's wave of acquisitions aimed to increase presence in these areas. UnitedHealth bought XLHealth, provider of Medicare Advantage plans and dual-eligible coverage. WellPoint bought Amerigroup for its strong Medicaid business. And the list goes on.

But the road forward for these programs is unproven, since the ACA remains a work in progress. And the companies differ in how exposed they've become to these specific risks. UnitedHealth's Community & State segment only accounted for about 15% of overall revenues in fiscal 2012. Over at Humana, retail Medicare Advantage customers accounted for more than 53% of overall revenues.

Foolish final thoughts
The ACA changes will push health insurance further away from true insurance products in how risk can balance out with denials or premium hikes. But the government isn't leaving companies high and dry, since the ACA also includes several provisions to help ease the incoming risk burden. Notably, the individual mandate and health insurance exchanges may drive more healthy individuals into policies if they don't want to pay the opt-out fees.

Companies still need to get smarter about how they manage risks within the new framework. Diversification and sheer size, like we see with UnitedHealth, has the best shot of staying on top. But Humana and other smaller, risk-laden companies might have troubled waters ahead.