Where respect rules, a company can perform exceptionally well.

Investigating these "soft" aspects of a company are important for investors. And although we can't capture all of the intangibles of a company in one article, Glassdoor.com -- a website that collects employee sentiment for companies across the world -- recently came out with a list that could help: the Top CEOs of 2013.

Over the past few days, I've covered CEOs 25 through 10. Today, I'm going to introduce you to the company with the 9th highest-rated CEO, give you some background on the company, and at the end, I'll offer up access to a special free report that covers the biggest names in tech.

Citrix Systems (CTXS 0.12%)
In an interesting twist, both the No. 10 and No. 9 CEOs are both leaders for the cloud computing revolution. Last week, I detailed how Marc Beinoff, CEO of salesforce.com and 10th rated CEO for 2013, was one of the earliest pioneers of cloud computing and Software-as-a-Service, or SaaS.

If the concept of "the cloud" is somewhat foreign to you, don't be embarrassed; when I first heard of the the cloud years ago, I though it had to do with the things floating through the sky. Foolish colleague Alex Planes wrote a great primer on the cloud that's worth reading here.

Whereas Salesforce focuses on providing the platform for companies to use the cloud, Citrix provides the technology that helps the cloud to function. Today, we'll be focusing on Citrix CEO Mark Templeton. 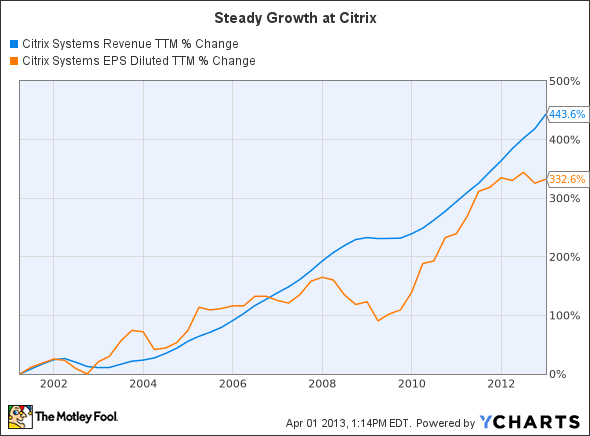 Leadership as a differentiator
Citrix certainly goes up against some big competition in an effort to make the cloud faster and more efficient. Cisco and VMware (VMW 3.97%) are in the same industry and have market capitalizations exponentially higher than Citrix.

Cisco itself is worth over $100 billion, and though VMware is a much more modest $34 billion, 80% of the company is owned by EMC (EMC), which sports a market cap of $50 billion. I throw these numbers at you to demonstrate that Citrix, sitting at $13 billion, is far smaller.

However, that doesn't mean the company isn't performing well within its virtualization niche. VMware recently had to hold a strategy day to make it clear it wasn't being taken to school by Citrix. Citrix has been stealing market share from VMware and Citrix's XenDesktop is only half the price of VMware's vSphere.

Maybe one of the reasons Citrix has performed so well, and Templeton has gotten 95% of his employees to approve of the job he's doing, is because of his leadership style. In an interview with The New York Times, Templeton stated:

If you say that to everyone over and over and over, it allows people in the company to send me an email no matter what their title might be or to come up to me at any time and point out something -- a great idea or a great problem or to seek advice or whatever.