The large regional bank makes a lot of money, though you might be surprised where the bulk of it comes from.

There are numerous points of data available for investors when deciding what companies deserve their investing dollars, and the ability to parse all the applicable data from the noise is truly a skill that is honed over many hours. Nevertheless, if you truly want to start some in-depth research into a company, a great place to start is by examining how it makes its money.

When it comes to regional bank PNC Financial Group (PNC -1.38%), the short answer is that it makes its money from banking. However, if we go beyond this simple answer and dive deeper into the numbers, we should have a better idea of where it makes its money.

In the words of the bank
According to its recent 10-K, PNC Financial is "one of the largest diversified financial services companies in the United States." It divides itself into six business segments: retail banking, corporate and institutional banking, asset management, residential mortgage banking, BlackRock (BLK -2.72%), and non-strategic assets portfolio. Each of the segments contributed to the bank's $14.9 billion in revenue during 2012, though the largest impact was felt from the banking segments: Passive investment can pay off
PNC's ownership stake in BlackRock is also worth noting. The investment management firm is probably best known for its various exchange-traded funds (ETFs) under the iShares name or because it is one of the largest asset management firms in the world, with nearly $4 trillion under management. PNC's stake in BlackRock is currently worth $7.4 billion, which represents a 22% stake in the company. This passive investment requires little work on behalf of PNC, though it continues to reap the rewards of BlackRock's market-beating performance over the past year: 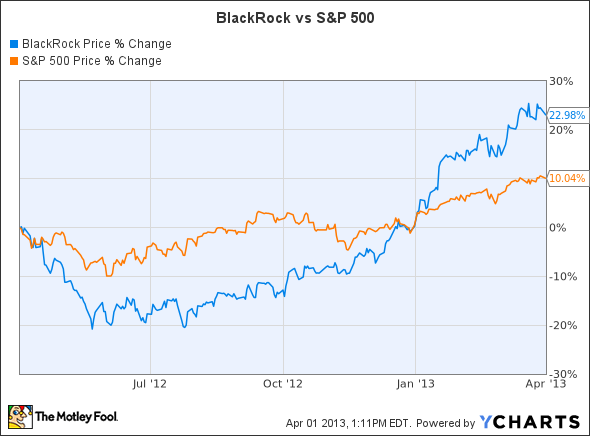 Small but not unimportant
Though the residential mortgage segment is a small portion of PNC's overall revenue picture, it is nevertheless an important part of the bank's business. The segment is responsible for the origination of first mortgages nationwide, though its primary focus is within its retail banking footprint. The majority of these loans is then sold either to Fannie Mae or similar entities or securitized as mortgage-backed securities by Ginnie Mae.

Finally, the non-strategic asset segment is home assets acquired through the acquisition of other companies. For example, the RBC Bank acquisition mentioned previously added $1.4 billion to this segment, with $1.0 billion deemed to be impaired. The segment is responsible for the wind-down of the associated assets while maximizing value and minimizing risk, hopefully resulting in a gain when the assets are sold. Barring any further large acquisitions, this segment should remain a relatively small piece of the bank's overall revenue pie.

Diverse but not complicated
Though PNC Financial is a large regional bank -- the second largest based on assets behind US Bancorp -- it is not nearly as complicated as some of its "too big to fail" brethren that seem to participate a bit more in activities that fall outside of "traditional" banking. Whether or not its focus on traditional banking makes it an attractive option remains to be seen.