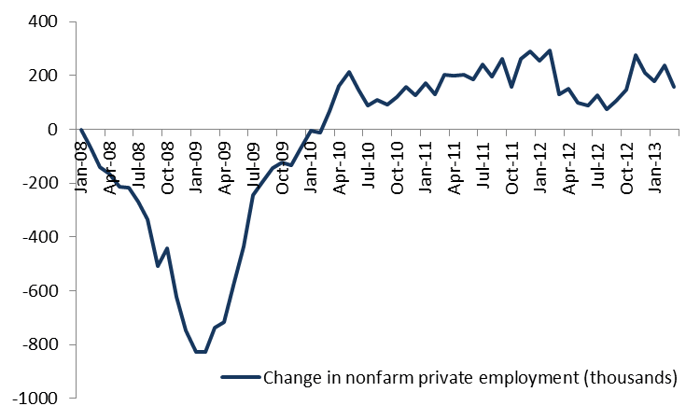 Although this month continues a three-year streak of improvements, month-to-month gains haven't been this low since October 2012. After February's revised 237,000 additional jobs, market analysts had expected a 205,000-job jump for March.

Moody's Analytics Chief Economist Mark Zandi said in a statement today: "Job growth moderated in March. Construction employment gains paused as the rebuilding surge in the wake of Superstorm Sandy ended. Anticipation of Health Care Reform may also be weighing on employment at companies with close to 50 employees. The job market continues to improve, but in fits and starts."

Goods-producing employment was the main culprit for March's mediocre results, adding just 7,000 jobs for the slowest growth rate in six months. Services managed a 151,000 increase in employment, boosted primarily by a 39,000 gain for professional/business services.