ExxonMobil's stock has vastly outperformed the market over the past few years. If it can continue to properly allocate its capital to grow its production then it should continue to outperform in the years ahead.

ExxonMobil's (XOM -0.77%) stock is one of the most widely held securities in the investing world. That might have something to do with the fact it's one of the largest publicly traded companies in the world. However, there's a reason investors keep pouring money into the stock: It's been a steady performer for decades.

In fact, the company has vastly outperformed the S&P 500 (^GSPC -0.84%) over the past decade as you can see from the following chart: 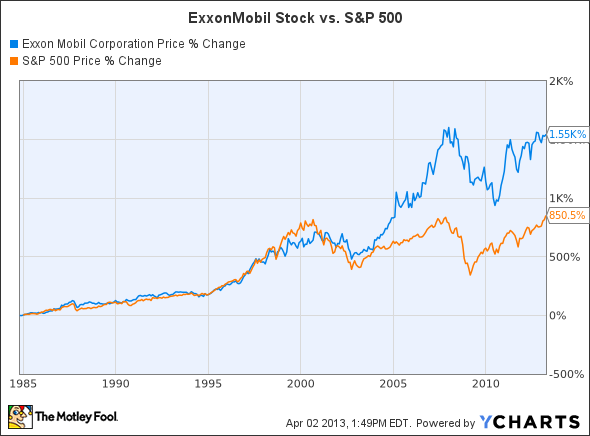 While past performance is nice to see, it tells us nothing of how ExxonMobil's stock will perform in the future. For investors interested in the stock there are two areas that you need to watch carefully. If ExxonMobil can continue to excel in these areas, then I don't see any reason why its stock can't continue to outperform.

Allocation of capital
ExxonMobil, thanks to high oil prices, generates billions of dollars of annual cash flow. While that's a good problem to have, the company does need to spend those dollars wisely. While the company spends billions to invest in new oil and gas projects, it also sends a lot of cash back to its investors. The company pays a relatively small dividend, currently around 2.5%, however, where the company really excels is a buying back its own stock. Over the past decade ExxonMobil has bought back more over $200 billion in shares.

That's important for investors because it means that you'd own a larger portion of the overall company by holding on to your shares. For example, ExxonMobil has only grown its oil and gas production by about 1% annually over the past decade. However, buy repurchasing all that stock, ExxonMobil was actually able to grow its production per share by 48% over that same time frame. That's a buyback with a real impact and one that few companies can match.

That's not the only area where ExxonMobil excels. The company's return on capital deployed has averaged just under 25% since 2008. That smashes the returns' of Chevron (CVX -1.84%) and Royal Dutch Shell (RDS.A) which averaged 20% and 15%, respectively, over the same time frame. ExxonMobil does this by choosing to invest in the projects that can deliver the greatest overall rates of returns. If the company can keep up this pace, its stock should continue to rise.

Growing production
If there is a rub against ExxonMobil, its the fact that its returns-focused business has delivered only meager production growth over the past decade. However, growth is expected to accelerate in the decade ahead. After a projected 1% decline in production this year, the company expects to grow production by a 2%-3% annual clip through 2017. More importantly, this growth will focus on higher margin oil and natural gas liquids projects.

I will point out that this production growth is a bit lower than some of its peers. ConocoPhillips (COP -1.02%) for example is expected to grow its production by 3%-5% annually over the same time frame. The difference here is that ExxonMobil is starting off a much larger base, and as the nation's top natural gas producer, the company is focusing its growth on higher margin commodities while de-emphasizing natural gas production growth. This will go a long way to ensure the company can continue generating those exceptional returns on capital employed.

The Foolish bottom Line
ExxonMobil's formula of allocating its capital toward higher margin production should reward investors in the years ahead. If the company can execute on its growth plan, I see no reason why the stock won't continue to outperform.